Austin Development Through a Barbecue Lens 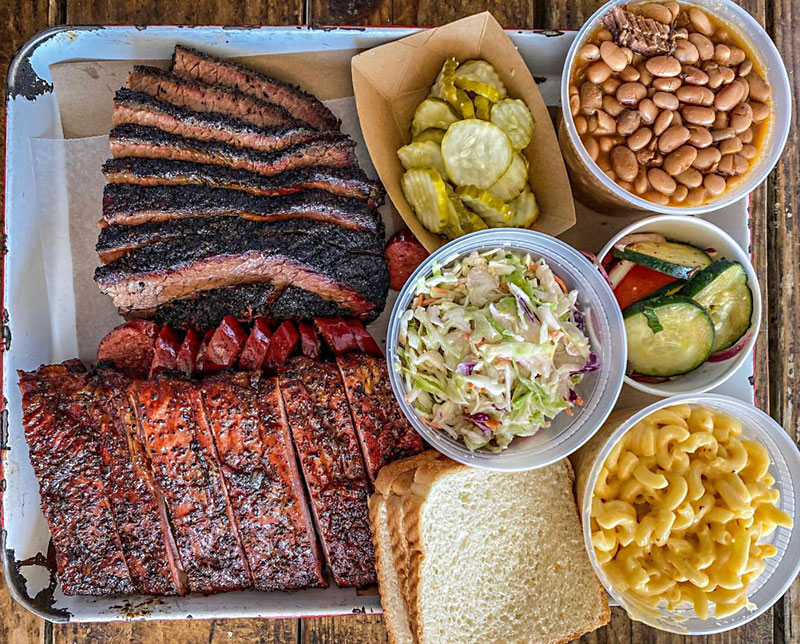 Stiles Switch BBQ & Brew has become a mainstay in the world of craft barbecue. Named after the historic 1800s I&GN railroad stop in Stiles Switch, Texas, and with roots that stretch back to Taylor and branch out to Dripping Springs, this local joint is a huge part of the barbecue boom. Their newest location in Cedar Park is steeped in tradition but boasts some unique touches: Look closely and you'll see the booths from the original Threadgill's – a piece of Old Austin that fits in perfectly in this modern setting. We sat down with owner Shane Stiles to talk barbecue history and their newest location.

Austin Chronicle: I want to start with a little bit of history – how long you've been here, where you came from, that sort of thing. You grew up in Taylor, is that right?

Shane Stiles: I went to Taylor schools my whole life; I grew up out in the country. One side of the road was Thorndale, one side was Thrall School District. I moved into town when I was about 13 and like I said, I went to school in Taylor. Then I went off to A&M and came back to Austin in 2001.

AC: We've seen how much Austin has changed. To me, the story of you getting your second location out in Dripping Springs, and now Cedar Park, that's almost the story of Austin in the last 20 years. Talk to me about the original location, how you decide to open a barbecue restaurant in what I would call Central Austin, what people used to call North Austin.

SS: Yeah, there was no design for that, I was looking south of the river the whole time, from inception to – basically, I just couldn't find anything. The prices on that side of town were just outrageous, so finally I decided to go ahead and drop across the river, north, and the very first day I did that, I drove down Lamar and saw the "For Lease" sign on the building, and ended up calling right there on the spot just to get some information. The landlord of the building answered the phone and we had about a 45 minute conversation. I told him what we were trying to do, where we were from, and he was like, "Man, I'm more than happy to talk to you guys about putting some barbecue in Austin." That's kind of how that location came about. It's more lucky than smart, but it turned out to be a good location. [Note: The Violet Crown Shopping Center, set in the historic Fifties art deco style, is one of the "oldest" shopping centers in Central Austin and was also the film production hub for Dazed and Confused in the late Nineties.]

AC: You were the first top-tier barbecue joint in town to operate like a regular restaurant with indoor seating and dinner service, but even still, it's kind of rare around here. To me, your timing, the location, and the full dinner service is also lucky or smart, whichever one you want to take.

SS: It's kind of funny, we had a location on south First Street that we were pretty hot about and we told the landlord and everything. Lo and behold, it turned out that, within one month of each other, John Mueller and ourselves started our operation in Austin. Had we picked that location, we would've been directly at the corner from each other.

AC: I was just going to ask you if that was the same time frame where he was on South First – that's hilarious.

SS: Yeah, we opened in November, and he opened in December – let's see, 2011. It ended up being that Sway restaurant had a little deeper pockets than we did. They scooped it up. It was one acre, we were going to be a little biergarten and everything, so that was the final straw that broke the south's back. We headed north, and I'm glad we did.

AC: Yeah, that's a big success and you decide to go in on a similar idea with The Switch. Tell me how that came about and partnering up and getting that thing off the ground, and why Dripping Springs?

SS: The area had a little bit more to do with Endeavor [Real Estate Group] approaching and offering us a restaurant. In school, I studied a lot of finance and ticked off all the boxes, to be honest. We loved the Hill Country, true country, so that's how the area kind of came about. As far as the concept, when we opened on Lamar, Aaron [Franklin] had just been in business in his brick-and-mortar for a few months at that point. A good six-to-eight months, I should say. Within that time until the time we opened in Dripping Springs, Austin became the barbecue capital of the world. The best overall dense barbecue population restaurants are in Austin now. I'm a big Southern cuisine guy, myself, so I paired up with my good buddy Todd Duplechan [of Lenoir] to help with the non-barbecue side of the menu. We just made it a little bit unique instead of a meat market barbecue joint. There's pros and cons to both after doing it, so that's kind of how it's not identical to South Switch.

AC: I didn't realize Endeavor had done that out where you are at The Switch, but I know with Rock Rose [Domain], they recruited and it's the smartest thing they ever did, because getting a whole shopping center full of chains is good, but if you can get local joints, it's a lot better.

SS: You're a hundred percent right. They're smart in that they're kind of going out and looking for what is local to Austin and people here in Austin are proud of, and offering us the sweetheart deal. Of course, they fill up around it with some of your more common corporate chains and things of that nature, but using local guys as the anchors is definitely smart on their part, and it's tempting when they come at you with an offer that no one else has even remotely spoken to you about.

AC: I know tons of people that live way down in the city, and live on Barton Hills or whatever, and you can get very insular there and think, "This is real Austin," but what people don't understand is everybody living out in Dripping Springs, Cedar Park, the Domain, they want all the Austin stuff, too. They don't want Olive Garden anymore. 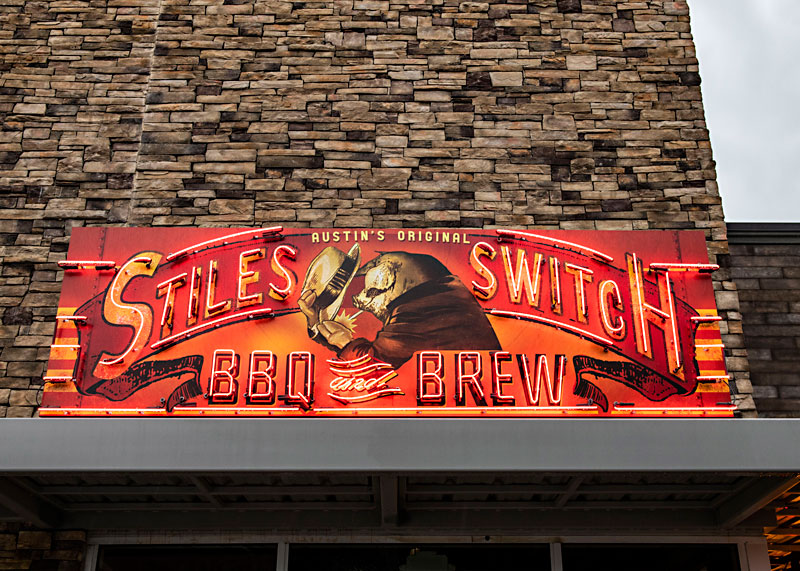 Photo by Wyatt McSpadden
“Yeah, so when we started this, it was literally me and my dad talking about how barbecue is still nothing in Austin. We never had some business plan to take over the world.” – Shane Stiles

AC: So that brings us to Cedar Park. Tell me about the decision to go up there and how that fit in with your plans.

SS: To your point that everyone wants what's cool in Austin and in the outskirts, it's what I say one hundred percent of the time, too. I've got a ton of family that lives up here in Cedar Park and they constantly go, "We have nothing barbecue-wise out here." I'm like, "Well, north of here's not that far." But this time we were a little bit smarter in terms of financial decision. We came across a brand new restaurant that, in eight months, went out of business. Of course, you always want to find out why they went out of business, but after we did our homework as to why, we felt comfortable that it didn't have anything to do with the location itself.

To walk into a brand new top-of-the-line kitchen, the space couldn't have been more ideal for our layout. It was like they built it for us. It made it fun. The hard part about opening a restaurant is the planning and the building, and the engineering, and the permits, you name it. It's like giving birth. So for us to not have to go through that part of it, we literally just had to redo the interior to make it feel what we wanted. It's awesome. Then of course, on top of the great location, Cedar Park is our customer base. For nine years at Stiles Switch at Lamar, people are constantly asking us when we're coming out here. In Cedar Park they drive in. We really think that the customer base out here is our customer.

AC: I'll tell you, people still have a misconceived notion about that. Those are people with discretionary dollars, right? That's another story of the birth of Austin.

SS: For sure. By the same token, one of the things I took into account was that craft barbecue is more expensive than – I'll say this as nicely as I can – your other non-craft barbecue restaurant chains. So the customer base out here, do they want to pay for the extra quality? Of course, by so many people at North Lamar telling us where they lived, we knew they did. Hell, recently, it was our first curbside customer; I walk outside to drop an order off, and it's three 20-year-old girls. They're like, "Hey, when are y'all open at Cedar Park?" I was like, "A couple of months, you guys from up there?" and they're like, "Oh yeah, we just drove in for this." Now I'm really tripping out because I never would've expected three 20-year-old girls to drive more than a block to get barbecue.

AC: Sounds like if you hadn't found this opportunity in this space, you could've passed on this and you would've waited another day to expand.

SS: Yeah, so when we started this, it was literally me and my dad talking about how barbecue is still nothing in Austin. We never had some business plan to take over the world. It was just kind of a unique opportunity presented to us, and this is the same thing. It's not like we got a calendar out and said 'we're going to open on this day'. We're really excited about this one. 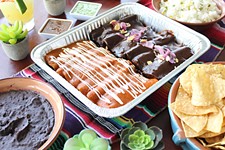 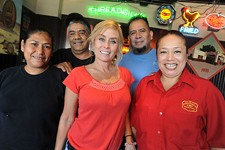