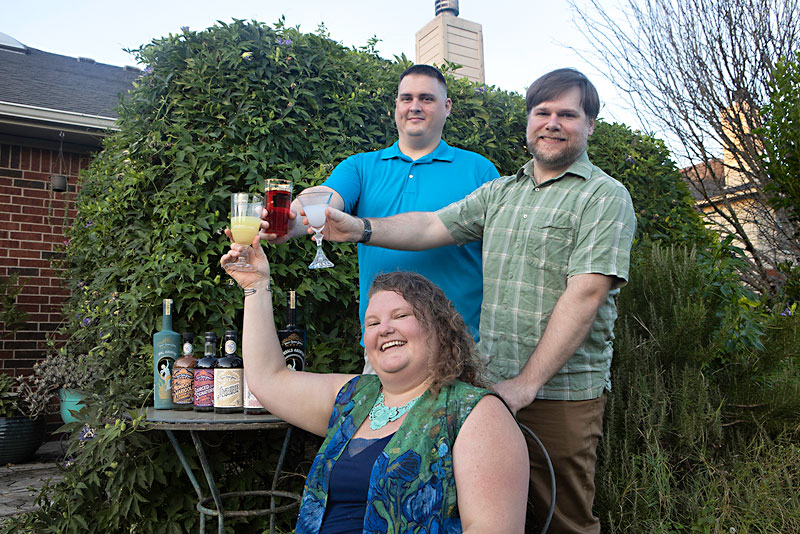 Matt Mancuso was disappointed. He'd heard so much about absinthe in his college years and even before that – soaking up, by a sort of cultural osmosis, its arcane mythology, the tales of its use and abuse by the artists, literati, and sensualists of France's Belle Epoque and the years beyond.

"The Impressionists called it their muse at the time," says Mancuso, opening the spigot that sends a thin stream of chilled water onto the sugar cube waiting atop an ornate and perforated spoon. "That idea drew me to it," he says. "Even before I enjoyed the flavor, I was already interested in it."

"A single glass of absinthe," as Aleister Crowley observed in 1918, "seems to render the breathing freer, the spirit lighter, the heart more ardent, soul and mind alike more capable of executing the great task of doing that particular work in the world which the Father may have sent them to perform." So – what's not to be interested in?

But, here in the 21st century: "What was available wasn't great," says Mancuso, setting that fancy spoon aside and hoisting the half-filled glass, letting rays of sunset illuminate the now-cloudy chartreuse liquid swirling within. "It became legal to make absinthe in the U.S. in 2007, and around 2009 I was able to get a hold of Absente – which is absinthe-like. It didn't actually have any grand wormwood in it at the time, and that's kind of the point of absinthe. But I tried it, and I then tried a couple of whatever else I could get my hands on. And I was like, 'Aaaah, yeah, I think I could do better than this.'"

Easier said than done, yes – but easier done, after all, due to Mancuso's area of expertise: The man has a master's degree in chemistry with a biology chaser, has been making a living in labs at UT and so on since 2010, after having finished grad school in Tennessee. "I'm really well-suited to run a distillery," he says. "I'm good at making separations and extractions and mixing – that sort of thing. So I bounced around a few more contract jobs for a while, then at some point decided that, if I wanted to keep working in Austin, I might as well write my own shitty paychecks. So I started a business."

But he didn't do it alone. "I was done with college as well," says Chris McLaughlin, Mancuso's partner-in-distilling, who he's known since they attended elementary school together in Galveston. "And I was like, 'I've been in Tennessee long enough, I should go somewhere.' And Mancuso was already in Austin, and he said, 'You should come down here!' It was a pretty easy choice because I can go wherever there's a hospital: My major was microbiology, and I have medical lab science on top of that."

"So," says Mancuso, "in 2012, we filed the paperwork for the business with the secretary of state. But then we kind of sat on it for about three years, until we ran into our third partner here: Jessica. Because Chris and I are pretty introverted. He runs the books, and I run the equipment, but we really didn't have the marketing and hands-on, outside-of-the-building part of things."

Jessica Leigh Graves may be the very definition of extroverted – and she's well-equipped with marketing experience. "I'm from here," says Graves, who met Mancuso via a dating app, "and, from having played in bands for years, I know a bunch of bartenders. So I wasn't completely unfamiliar with the industry or managing a brand and having a presence on social media and all that stuff."

Ah, but let's take a closer look at what's in that glass and how it got there.

"I started off with laboratory equipment, using a one-liter glassware setup," says Mancuso. "In August of 2015, we started our lease on the building where we still are in Bastrop, and I actually perfected our white absinthe first. I went through the historical literature and found recipes for absinthe or absinthe-like products from the 1600s through the 1800s – from Culpeper's Guide, all these old guidebooks. When somebody would go homesteading, they'd get this manual that was 600 pages of How To Do Everything, and absinthe was frequently a recipe in them."

"Because it's medicinal," says Graves. "The oldest existing medical text, which is the Ebers Papyrus, is a compilation of Egyptian herbal remedies – and wormwood is in that, in several common remedies for headaches and period pains and fevers and things like that."

Note: Wormwood is, Latinly, Artemisia absinthium, a plant that contains a compound called thujone – the part that, if anything about absinthe is going to fuck you up, that's the stuff right there.

"I chose the parts I really wanted from about six different recipes and combined them in my own personal recipe," says Mancuso, "then adjusted the levels through about a dozen different iterations, and came up with essentially what's in the Opal bottle. And from that I created the Emerald. Which is the Opal plus a second round of herbs, which turns it green."

"The Opal is 110 proof," says Graves, "and the Emerald is 140. Because once you add that much more herb, that much more oil, you need to have a higher proof of alcohol to contain it all in solution. Then, before you drink it, you add water and it turns cloudy – because you're bringing down the proof and the alcohol can't contain the oil anymore and it emulsifies. That's what the louche is. So if we tried to bottle the Emerald the way we bottle the Opal, it might separate like salad dressing."

“I’d never liked black licorice. So when the fellas told me they were starting an absinthe distillery, I was like, ‘Sure, guys – whatever.’ And then I tried some, and it was great, and I was like, ‘Oh, is this what good absinthe is supposed to taste like?’ Because I had no idea.” – Jessica Leigh Graves, co-founder

"Absinthe is essentially a concentrate," says Mancuso. "It's made to be diluted before drinking."

"Even some mediocre absinthes can taste fine if you properly dilute them," says Graves. "But I'd never liked black licorice. So when the fellas told me they were starting an absinthe distillery, I was like, 'Sure, guys – whatever.' And then I tried some, and it was great, and I was like, 'Oh, is this what good absinthe is supposed to taste like?' Because I had no idea."

But Graves has that idea now. "There's no zealot like a convert," she likes to say. And Mancuso has long since left the one-liter apparatus behind. "After I got the recipe to where I wanted it," he says, "I moved up to a 15-gallon setup, and I kept the same ratios and the product got better. Usually, when you're scaling up, the ratios get all messed up and your extraction changes and the process doesn't come out the same. But, for me, the louche got stronger and the flavors got better. And then I stepped it up to our production level – which is a 55-gallon still – and it got even better."

That Emerald concoction got good enough to win Best of Category at the 2018 Craft Spirits Awards from the American Distilling Institute, in fact, and it (and the Opal) has continued selling well in Texas and other parts of the country. And now here everyone is, in the plague year of 2020, with social distancing and much shelter-in-place drinking – but the Violet Crown Spirits story doesn't end in a puddle of glorified wormwood, no matter how acclaimed. The trinity of modern alchemists have expanded their herbal scope with a jasmine liqueur – a libation so alluring that your reporter's normally teetotalling spouse insists on always having a bottle at home – and an elderflower liqueur. Also, most recently, two varieties of bitter cordial: Midnight Marigold (a collaboration with Austin's legendary Midnight Cowboy speakeasy) and Sourced Signature (an amaro collab with Sourced Craft Cocktails).

Those latter three will soon be released in a handy give-'em-a-try package called the Wildflower Trio, so keep your tippling eyes peeled for that – in case you're, you know, interested.

How to Drink Absinthe 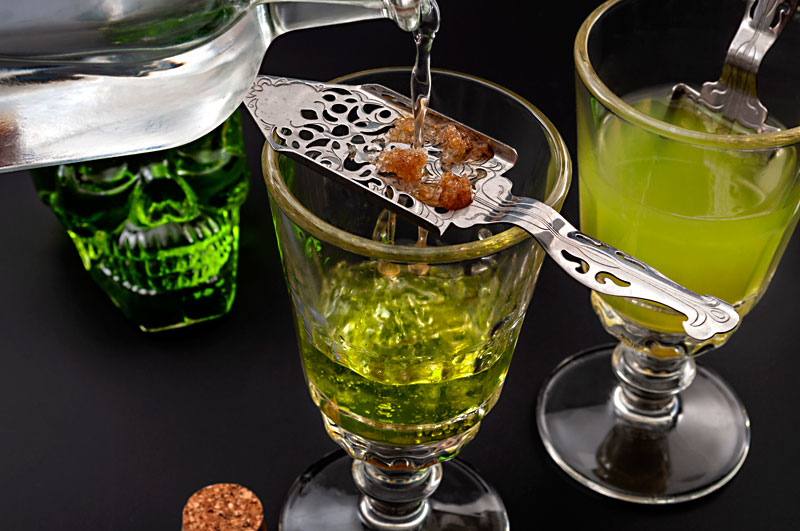 "You know how to drink absinthe, don't you, Steve? You just put your lips together and sip."

Okay, that's not what Lauren Bacall said to Humphrey Bogart in To Have and Have Not – those two were always more about whiskey, anyway – but the words do cover the basic imbibing process and they hold as true for absinthe as they do for all liquids. But, yes, we know: There's that whole storied ritual, right? The more cultured, paraphernalia-abetted way to engage with what was the intoxicant of choice for so many Belle Epoque creative sorts?

"One of the things I like to do is present the absinthe ritual as a fun way to do it," says Violet Crown Spirits' Jessica Graves, "but it's as simple and accessible as just add water, so people know that they don't need all the fancy accoutrements in order to enjoy it. Any glass is an absinthe glass if you put absinthe in it, far as I'm concerned."

So rest assured, dear reader. But when you do want to include that bit of fun amid your absinthe-based delight (and potential ensloshening), we're here with instructions for you.

First, you'll need an absinthe glass, an absinthe spoon, and (if you're going it alone) a small vessel for pouring water or (if you're indulging two or more people at once) a two- or four-spigoted absinthe fountain. If you want to be even more extra about it, you can also get a pair of special sugar-cube tongs; but, in any case, you'll need some sugar cubes, too.

Note: You can purchase any of these items online, if necessary. At www.absinthes.com, say. But we were so impressed with the Austin Shaker's clever display of absinthe tools the last time we stopped in to grab some haute hooch there, that we're mentioning the local emporium now.

And then, tools at the ready:

1) Pour a shot or two of pure absinthe into your glass. And just observe it for a moment. Look at it, shimmering there, seeming almost radioactive with its verdant viscosity.

2) Next, place that perforated spoon across the top of the glass, and put a sugar cube onto the spoon.

3) Take your personal water vessel, or open the spigot of your shared fountain, and let water trickle over the sugar cube, through the spoon's ornate perforations, and into that tall puddle of green. "The water should be about three times the amount of the absinthe," suggests Violet Crown's Matt Mancuso.

4) Watch, now, as chemical processes turn the transparent fluid all milky, displaying the famous louche as that Artemisia absinthium oil emulsifies and releases its liquid kraken of flavor.

5) Reckon you can take it from here, citizen. And do tell that Green Fairy we said howdy, okay?