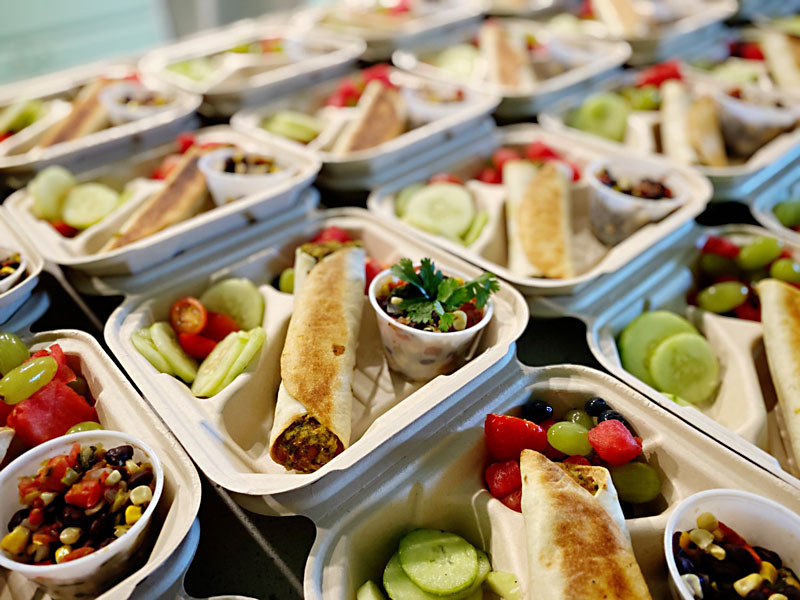 When Jazz Mills answers the phone, it's prep day. That means "chopping a ton of onions and sautéing all the vegetables and making all the beans. Me and my friend Carrie split the duties in half. So she's making these vegetarian taquitos, we're both working on fruit salad, I'm working on vegetables ..." The fruits of their labor will be 120 dinners for people living at Camp RATT (Responsible Transition Town), Gov. Abbott's state-sanctioned encampment for the unhoused on 183.

Mills makes meals under the moniker Free Lunch, a largely solo venture only 3 months old. She had been working as an event producer when the pandemic hit and experienced the now-familiar story: a glut of free time in which she made a drastic career change, parlaying her 15 years of music scene connections into a homegrown effort that now provides 500 dinners a month to the roughly 200 people that live at Camp RATT. Free Lunch's main focus is healthy food, with fruit salad figuring heavily in most meals. Mills says in 100-degree heat, the dry, prepackaged food that often gets dropped off to the houseless community "is really bogus."

"If someone is actually dying in the heat and you give them a peanut butter cracker, the gesture is sweet but we're not helping. Those prepackaged meals create a lot of trash and a lot of them actually don't get eaten," Mills explains. "So when I started going out there I started asking people, 'What is it that you really really want?' And everybody across the board said, 'Fruit and vegetables. We just want things that can help us beat the heat.'"

Free Lunch makes perishable meals, light and fresh for summer, keeping in mind that many in the camps are diabetic, have dental problems, or are simply vegetarian; bell peppers, cucumbers, strawberries abound. Rather than plastic packaging, Mills uses compostable boxes: "It is more expensive, but it makes me feel better when I drop off a bunch of meals, knowing that none of it is trash. So it's worth the extra cost for me." She has plans for an edible garden specific to Free Lunch, so the entire process can move toward zero waste.

Free Lunch partners with the Other Ones Foundation at Camp RATT and is currently committed to weekly dinners on Saturdays to "create some consistency for myself and for them." Mills says that often, organizations like hers overlap and there is surplus food in some camps while other camps get overlooked. "So I committed Free Lunch just to this camp so I could get my bearings and figure out what does this actually cost per month and what does this feel like laborwise, all of that stuff. Once we become a well-oiled machine, [we'll] essentially create a meal plan where Free Lunch would be providing two meals a day to everyone at that camp. Once that's organized, then hopefully I can implement that same type of meal structure in smaller camps around town."

Mills' vision for Free Lunch is to be a resource, above all: "I'm not competing for grant funding, I'm not competing for city funding ... If we can take some of the meal pressure off of a smaller church ministry or a smaller nonprofit, then they can take their resources and their volunteers and focus it on other things that the homeless need besides the food."

Free Lunch is funded by donations from the community and a program where donors become "Lunch Monitors." Lunch Monitors buy a $10 monthly subscription to a quarterly zine by Mills and Free Lunch volunteers, which serves the dual purpose of transparency and accountability: "Every three months you'll get an update on what we did [during] our past season and what our plans are for this coming season. Rather than sending out a monthly email list, we wanted someone to have something tangible and beautiful. That's what keeps me motivated, is knowing people are giving us their money and we're making them a promise that we'll do this, so I mean it." She says her goal is to get to 2,000 Lunch Monitors, which will enable her to hire staff to help cook, drive, and coordinate outreach to different organizations, which she hopes will up the output by the new year to 5,000-10,000 meals a month.

Right now, Mills mostly cooks alone, sometimes with friends who bring leftover fruits and veg from the Sustainable Food Center – but she tries to avoid in-kind donations. ("Someone would bring me a case of 12 yogurts. It's really sweet, but I don't know how to fairly give 12 yogurts to 200 people.") Even so, if she receives unsolicited produce, she'll make something spur-of-the-moment to drop off at a random camp. Structural organization is scarce in times of crisis, but to Mills it mostly doesn't matter. "Really, we want our answer to be yes. I don't want things to be bureaucratic." Free Lunch provides meals not just to the unhoused but to single moms, people who have been put out by the pandemic – anyone who's asking for help. "If someone emails me and says, 'I need food,' I wanna be able to say, 'Sure, I'm on my way.' That if someone calls us and says, 'Hey I'm hungry,' I don't need to see your paperwork proving that you're poor and hungry. You can just have the food, you know?"

Ultimately, it's that empathy that drives Free Lunch. "Our big focus is obviously on healthy food, but also boosting morale. It's gnarly out there." Even with her plans for expansion and formalization, Mills says her personal focus is on cooking at the camp, eventually getting the right permits to build an on-site kitchen, which will allow her to interact more with the community. She recounts that a personal friend passed away recently, the result of living outside day after day in 100-plus degrees. "I want people to realize these types of problems in our community are not necessarily something that we can just vote on and they'll go away. These are complicated, nuanced issues and people really are dying in our streets. If we say we care, if we say we wanna see things change, that requires a lot of hard work. And if you're able to put in some of the work then you should, in whichever way you feel comfortable doing that."