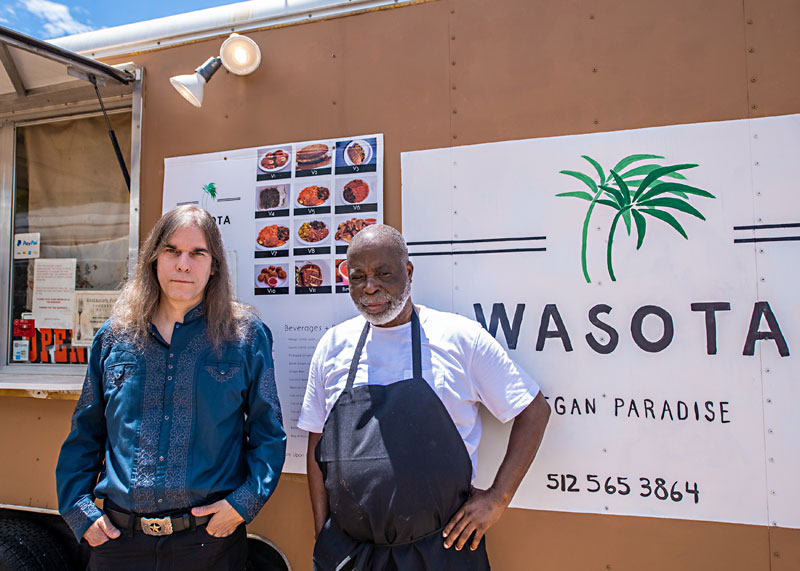 It takes a thief to catch a thief, so the saying goes. And sometimes, we figure, it takes a vegan to interview a vegan. Thus, this interview with Lawrence Eguakun of Wasota Vegan Paradise was conducted by Graham Reynolds – the composer and bandleader of Golden Arm Trio fame, yes – who's been a fan of Eguakun's cooking since the Nigeria-born entrepreneur ran World Beat Cafe on the Drag back in the early 2000s.

These days, Eguakun is the man cooking up the all-plant-based goodness at Wasota in North Loop's vegan enclave called Possum Park. These days, with the – well, we'll let Reynolds take it from here.

Lawrence Eguakun: Well, I was doing my business by myself, because it wasn't that busy. But then all of a sudden, I was running out of food every day. People were lining up and I didn't know why. And then somebody told me that we were listed.

GR: Yeah, they put out a list of all the Black-owned restaurants, and then, boom!

LE: Yeah, it came on a Tuesday. I called everybody to work at 11am, and I don't open on Tuesday until 5pm. So I was working, I did my best. I called my wife to come and help, and she doesn't like the restaurant work. But then I was able to hire somebody quickly. And now – it's back to normal.

GR: So the bump from the listing is gone?

LE: Yeah, it's gone. And when I saw your message, and you said you were going to interview me for the Chronicle, I thought, "Well, that will help again!"

GR: And how long has Wasota been open?

LE: Wasota has been open since 2011. But, in 2011, it was called Wasota African Cuisine. Because I was cheating – making meat and everything. I never really liked meat, and I always wanted to be a vegetarian. Not totally vegan, but vegetarian. But, because I cook meat, sometimes I'm tempted to sample it. But when I decided to come back, I told myself, I'm going to rebrand to vegan. Totally vegan. I've always been vegan-friendly, but now I'm totally vegan and I love it.

GR: When did you first hear the word "vegan"?

LE: I heard the word vegan at World Beat Cafe. I had a waitress who was vegan, and she told me to be vegan-friendly. And I had some other friends who were vegetarian but not vegan. And so I said, okay, I'll make a vegan-friendly restaurant – just a few months after I opened. And I learned something that concerned vegans. At World Beat Cafe, I had several pots, and the pots that I was using for vegan food, I never used them for meat processing. If you want to be friendly with them, be real friendly with them. And one day a person came to the restaurant and said she wanted a veggie burger, and I said, no, we don't have any veggie burger. And I asked, "What is a veggie burger?" And she said she was gonna buy me one on her way tomorrow. Then she brought tofu – something like tofu burger? And I tasted it, and there's no flavor. And I say, "How the heck do people eat this?" You know? So I created my own. I used black-eyed peas to create my own patty, and everybody loved it.

GR: So, you make Nigerian food and you make West African food, and you also make veggie burgers. What are the things you make that are vegan but are the most traditional? 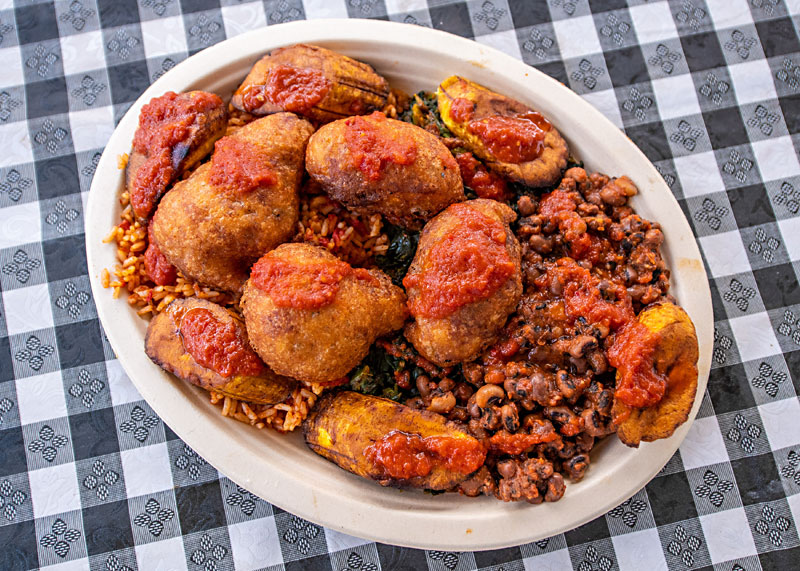 GR: In order to make it vegan, you didn't have to change anything?

LE: So, in the past, when I cooked food with meat, I used that to enhance the food. Now I don't do that at all. And another thing I do, there is a way I present my food that other people don't present their food like that. For example, I do Wasota Platter, which is the bestseller. I have rice, stewed black-eyed peas, sautéed spinach, fried plantains, and black-eyed pea fritters. And every spoon you take, you're gonna enjoy it. There's five items there and any one you eat, you're going to enjoy the whole five.

GR: What year did you decide to go 100 percent vegan?

LE: About three years ago.

GR: Did your family think you were crazy?

LE: No, my wife doesn't bother me about doing what I like. She understands that I really love what I do. For me, vegan gives me – I'm older now, I'm almost 70 – so it gives me more leverage. In the past, I have beef, I have goat meat, I have chicken – I cook all those things, and I don't just cook it for the fun of cooking: I cook it so my customers will love it. So now, with the elimination of the meat product in my food, my job is easier. I'm making as much as I used to make, because I have broader customers, but it's easier for me – and that is important at my age right now.

GR: Who taught you to cook?

LE: I mostly taught myself to cook.

LE: I was a very picky eater. I never liked meat a lot. And my mother is a very good cook, everybody always liked Mom. But I'd always tell her, "Can you take this out of that?" And it got to a point when I was around 12 or 13, and my mother said, "Look, if you don't like what I'm cooking, get in the kitchen and cook yourself."

LE: And I was glad to do it, you know? Most of the time, I don't do it. But some of the time – there are particular things I like. I don't like food with too [many] ingredients. I like my food to have simple cooking. Mostly tomato-based, red bell pepper, little things – a straightforward taste. I rarely eat in restaurants, and I don't like to use sauces made in the bottle. Because I make my sauce with two or three ingredients, and you see other sauces and there are like 10 ingredients – so I don't use them. What I like is Mexican salsa, because it's garlic, tomato, and onion – and that's important, that's the kind of thing I like. When I was working in the high tech industries, every Friday we'd go out in a group, to eat in a different restaurant. We'd go to a Chinese restaurant, and people are picking this, picking that. I'd just pick white rice, because if I don't know what's the food, I barely eat it. So I thought nobody would like my food.

GR: But everybody likes your food.

LE: Well, then I started to do promotions at Liberty Lunch, and I bring an international band from Nigeria, and they don't want to eat hamburgers. And I cook for them. And some of the groupies, the guests, the Americans who come to eat that food with them, they love it. And when I was in high tech, we'd have pot luck occasionally, and it would get to a point that people would ask me, "When are you going to make us something?" So I just would make it, because I find it as a blessing when you can do something that people love. It always gives me the pleasure – to respond to them when they ask for it. I cook my food with love, first and foremost. I tell people, if I cannot eat it, I won't sell it. It's as simple as that. 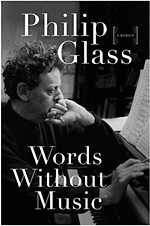 Words Without Music: A Memoir
Famed Austin composer appraises the autobiography of Philip Glass, father of the modern classical avant-garde