Meet the king of West Campus 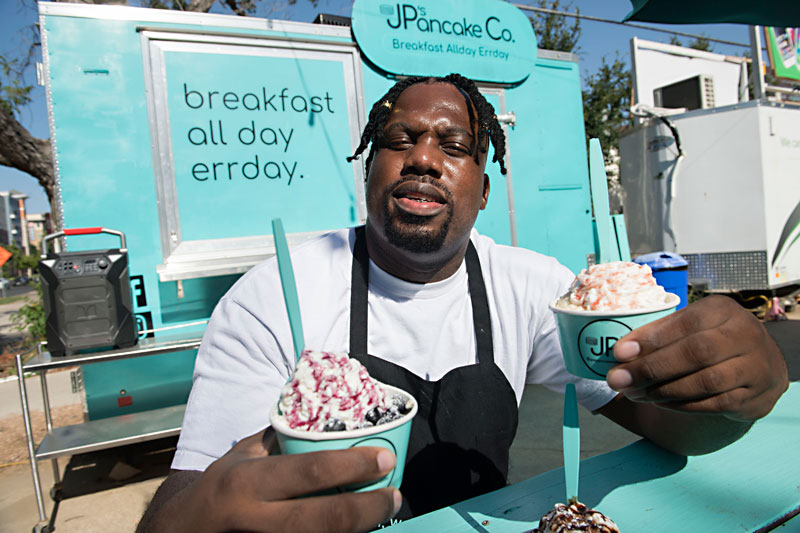 "I have too many ideas for my own good."

That much is clear about John Paul Udenenwu before you ever meet him. For a truck focused on a singular food, the menu at JP's Pancake Company is exuberant and ambitious. Take the Bacon Boy, for example: It is three four-inch white chocolate chip pancakes hidden under layers of sliced banana, peanut butter, Nutella, maple syrup, caramel, and of course, chopped bacon. Along with the Classic (a white chocolate-raspberry concoction), the Bacon Boy is one of Udenenwu's favorites.

Served in little blue ice cream cups, his take on the pancake has roots beyond American diner fare. The contrasts in his mother's Nigerian cooking inform everything he does. "If something's sour, there's gonna be something that's sweet. If something she made was creamy, she was gonna add a little crunch," Udenenwu said. But he makes dessert after all, so he doesn't always follow his mother's philosophy to a tee. "There are some things that are overly sweet that I will still make," he laughed. Still, his approach is meditative. "It's sweet, but it's gonna be different kinds of sweet. Like it might be candy sweet, and there'll be some natural sweet."

“You cook with your ears! It sounds super try-too-hard, but I listen to my food. I listen to the sound of the batter when I mix it with my hands.” – John Paul Udenenwu

But besides that thoughtful precision, his food emerges from spontaneity. "One part of my creative process: no measuring cups. We don't use any type of tools," he said. "As Nigerians, we're taught to cook with our five senses." He's intentional about each, especially hearing. "You cook with your ears! It sounds super try-too-hard, but I listen to my food. I listen to the sound of the batter when I mix it with my hands." Something inside him knows how it sounds when a recipe is ready, and that intuition has yet to lead him astray.

"Everything in my life is a God thing," Udenenwu said. He's from Mo City, a town on the southside of Houston. (It's called Missouri City on the map, "but if you're from Houston, you don't call it that. Unless you're, like, 60.") After giving up on childhood basketball dreams, he says his faith drove him to Austin. When it came time for college, he landed at Concordia University Texas without knowing much about the city; "It was God calling me to a new chapter in life."

Udenenwu believes everything happens for a reason, including every little pivot before he found his way to food. He had three different majors at Concordia and various part-time gigs at his church, as a motivational speaker, and at a Taco Cabana where, one fateful night in 2016, someone left some pancake mix in the kitchen. Tired of fast food carne asada, he took a couple passes at it – of course, with no measuring cups – then served the second batch to his co-workers. "They loved it," he said, still ecstatic in hindsight. "The atmosphere, the energy, the vibe that that moment created ... I was addicted to it, I chased it, and honestly, the rest is history."

Though he'd already learned how to cook from his mom, his batter presented a new opportunity. "There are a million things I can do with a pancake," he said. Thus, JP's Pancake Company was born in 2018. He worked events a few times per week before parking in West Campus in early 2020, where he's begun to make a name for himself.

"People call me the king of West Campus! [An employee] didn't believe me. She was like, 'Get out! You're tripping!'" Udenenwu recalled, laughing and conceding that he can be full of himself sometimes. But five minutes later, he made some free pancakes out of appreciation for one of his regulars, and a customer he'd never met looked on and said, "Wow, you really are the king of West Campus." "I was like, 'Hey, hold up! Come here, bro! Tell her what you just told me!'" His favorite moments at the truck are serendipitous, a mix of the right people, right place, right time.

Of course, there are still rough patches. The instability of the pandemic has thrown all local restaurants into high gear, and the impacts of recent protests for racial justice have left him with mixed feelings.

"The message around supporting Black-owned businesses is obviously a great way to get word around," he said. "Just make sure it's a lifestyle." The people he grew up with in Houston made it a point to frequent Black-owned restaurants and shops all year long. But he's been surprised by the way that ethos has made its way to Austin, especially in non-Black communities. Since late May, he's seen an influx of customers who are less eager to interact with him than they are to post pictures of his food online with #SupportBlackOwnedBusiness. He's overjoyed that Black business owners are getting deserved appreciation but struggles with the way social media appearances supersede genuine support and tokenize him. "I just don't like fake love," he said. "Stand up to your racist aunties and uncles. Support Black businesses. Support local businesses in general. If me being Black brings you here, come back because I'm good at what I do."

Udenenwu repeats this to himself often and is grateful for his success so far. JP's Pancake Company is Austin's first pancake food truck, and as of June 1, it's Udenenwu's full-time job. He has loyal regulars and has even had people drive from hours away to try his creations. He says that JP's will never be a brick-and-mortar, but he hopes to have a fleet of trucks in the future. And once he's able to grow his team, he plans to give employment to formerly incarcerated people and participate in efforts against food insecurity.

"You gotta know what your vision is, and you gotta be willing to die with that," Udenenwu said. For him, that vision starts with a white chocolate chip pancake adorned with a handful of fresh raspberries, a drizzle of homemade raspberry syrup, and some amount of whipped cream – whatever sounds right.