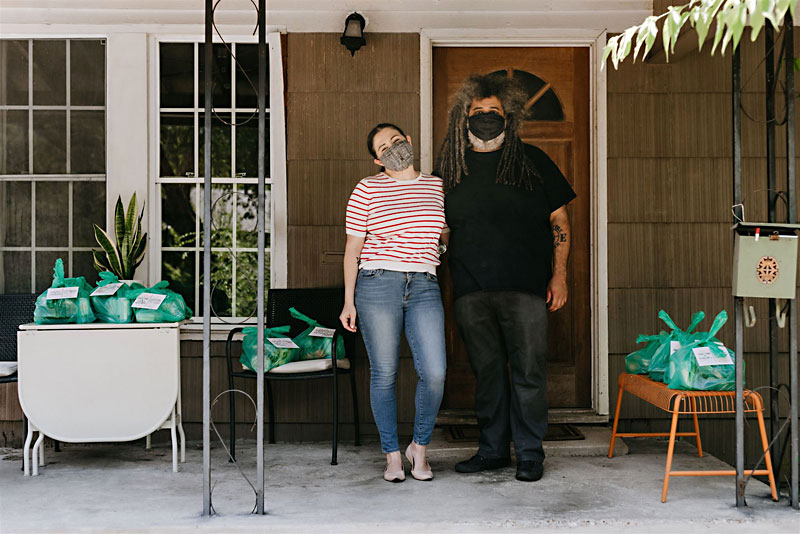 Maris Clegg and Chris Cubas are the main people behind Red Beans and Ricely Yours – an ongoing weekly program dedicated to providing a free meal to Austinites who need one.

We've reported on other such endeavors in this city – Vic and Al's, which has been dishing out the eats along Manor Road; Tso's Chinese Delivery, delivering food, gratis, to those in need; Kick Butt Coffee on Airport, providing free lunches for the pandemically unemployed; and more – but here are two people who are unaffiliated with any restaurant or food truck or bakery. Here are two ordinary citizens, working out of their home kitchen to help a struggling community as best they can.

Well, maybe not ordinary citizens. Maybe anybody who does a fine thing like this is already beyond ordinary, QED. And Maris Clegg is "just" the guest services manager at a local boutique hotel, and Chris Cubas is "just" another guy who works at Apple. But that Cubas is also a popular stand-up comic, as you likely already knew, and one of the funniest people to ever set foot in this city. But –

"It's not about us," Cubas insists. "Don't make this about us. What we're hoping is to reach more people who need a meal. It's about getting food to people who might need it – or it might just make them happy on that day. Like, maybe you have a job, you have money – but you've got child care issues, and you're stressed, and not having to cook that night helps."

Which is why there's a Red Beans and Ricely Yours Facebook page – where, on Tuesdays, you can find a link to sign up for "a free meal delivered to you with safety in mind. There is no judgment and the form is anonymous." The meals (they come with a side of cornbread, a baked dessert, and a beverage) are then distributed on Sunday. And how did the couple get started with this sustained and labor-intensive act of kindness?

"I love the idea of sharing," says Clegg, "and I guess it just grew from the fact that we couldn't throw a party."

Because they couldn't ... throw a party?

"It was around early or mid-April," says Clegg, "and we were really starting to see the effects of the COVID. And a lot of our friends in the service industry were being furloughed and weren't sure where they were gonna get their next paycheck or their next meal from. And, in the past, our first instinct to help out was always to throw a benefit or a party. You know – go to a bar, have a raffle, get the support of small business. And we realized that getting people together in a small place like that, it was the opposite of what we could do now. So we thought about what we could do, because we felt that we had to do something. And I make red beans on Monday, usually – my day off – because they're good for leftovers, and they're cheap. And we were like, 'Well, let's expand upon that.'"

So, red beans and rice are good for leftovers, and they're cheap, and – it's pretty tasty stuff, right?

"Oh, it's very good," says Cubas. "When you cook four batches on a Sunday, you don't necessarily wanna see it all week. But there'll be, like, half a bowl left sometimes, and we still eat 'em."

Austin Chronicle: Do y'all use an original recipe? Or an old family recipe, maybe, passed down generation to generation?

Cubas: You want me to pretend?

Cubas: It's on the bag of Camellia Red Beans. Of course, we put our own spin on it, as far as seasoning is concerned, but that's the foundation.

Clegg: It's been a variation over the years, but it's one of those things that I don't even think about. I do now, because we've had to double the amount, or quadruple it. But, honestly, the times I've made it before, I just kind of went through the motions and never thought about a recipe – so there's nothing written down. There's just my experience with red beans, and what I like about eating them.

AC: What about the sausage? Did you always use it, or is that new for Red Beans and Ricely Yours?

Cubas: The sausage is step one. You start with browning that, and it makes the liquid that you cook the vegetables in, and – that's kind of where the flavor starts.

Clegg: The andouille sausage, I have specific ones that I like, but andouille sausage is the beginning. We'll have our drivers come, and it's all contactless, but we'll leave the door open and they'll be like, "Oh my God, that smells good." It's a lot of sausage, and garlic, and vegetables, and more garlic. And I think that it's key for everyone to know that there isn't a vegetarian option for this red beans and rice.

AC: Is this a project that's gonna become the biggest part of what you guys do? You've already been at it for two months, and – is it something you're gonna devote the rest of your lives – the rest of the pandemic, at least – to?

Cubas: So, I don't know that we're gonna stop doing this, even though we both have full-time jobs. However, this week we're doubling what we've done. We had been sitting at, like, 22, maybe 23 meals – which is where we're comfortable. And we're doubling that this weekend, to 44. And there's been talk of expanding past that? But, right now, we need to make sure that we're putting out a good product, that people are still getting good food.

Clegg: The quality and portion of it is important to us, so people feel that they're getting a substantial offering. So right now we're going to see if we can do 44, and go from there. By getting more drivers, with more people volunteering to bake the cornbread and the dessert, those are really, really helpful measures – and I think we can deliver, for a while, on doubling it to 44.

Cubas: Right now, the delivery drivers and baking are the most helpful, particularly since we're expanding. That means two rounds of deliveries, so that means twice as many drivers, twice as many baked goods. But people have been tremendously responsive! We have multiple spreadsheets of booked dates. We've got snacks covered through the end of August, and people are starting to do cornbread for us as well. It's been amazing to see how willing people are to volunteer their time and help.

For more information, and for volunteer opportunities, please visit the website. www.fb.com/red-beans-and-ricely-yours-austin-104334251321749