After a 17-month delay Hold Out Brewery has arrived 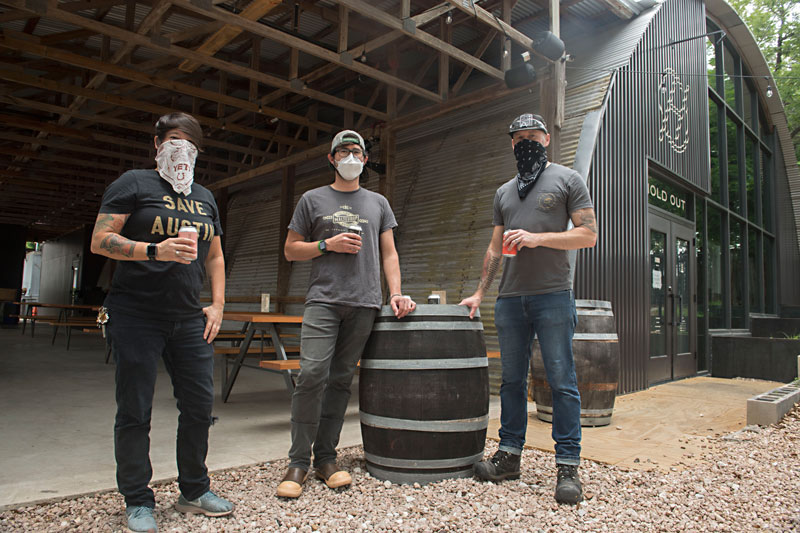 Let's get this part out of the way, because this story is about what Hold Out is – on the shortlist of Austin's best overall breweries – and not about what it isn't: coming soon.

Hold Out Brewing cannot be restrained any longer by city of Austin gaffes. It cannot be described by industry critics in exactly eight words, "It's going to be FANTASTIC! Any day now." And it cannot be lam­pooned by skeptical beer groups on the internet after a pronounced 17-month delay. Because Hold Out is, in fact, finally here.

Largely considered the most anticipated brewery opening of the last several years, Hold Out has amassed a steady stockpile of Dream Team-level all-stars (1992-era) from the hospitality industry, the graphic design trade, and, of course, the beermaking game. Above that, Hold Out is just the latest in the vibranium-quality lineup of casual nightlife joints (Little Brother; Brew & Brew and property roomie Better Half) by beverage industry savants Matt and Grady Wright and their longtime partner, Matthew Bolick. These are the kind of folks who aren't gonna outsource their fan-pleasing intellect to just anyone.

So yes, Hold Out has had enough of your stampy-footed impatience and is open for business with a composite roster of beer industry fucklions. And any concern about how long it took them to unlock the doors to the place? Frankly, who's even trying to care about that anymore? That's no longer part of the narrative, because right now, everyone is chattering about how Hold Out has blown off their own doors with the class of product flying right out of their diminutive eight-and-a-half barrel brewhouse and into your hatchback, including a pitch-perfect pilsner called Ol' Gil – which, by the way, was dauntlessly offered as a debut beer to a feverishly discerning lager-loving town.

Their stock of it was sold out by day three. "The immediate response to Ol' Gil was surprising," recalls co-founder Grady of the brothers Wright. "It has a German malt bill and a German hop bill with a Budvar Czech yeast strain. We think that it hits the perfect sweet spot, bringing in both the German and Czech styles of pilsner."

Because Hold Out wasn't sure exactly which of the two proud pilsner heritages to go with, they simply dubbed Ol' Gil a Euro Pils, a gap they believe the beer bridges in a packed out local pilsner scene.

"Places like Live Oak and the ABGB taught people what a good pilsner was, and those beers were such big hits with [beer] industry people," mentions Wright. "Then the seasoned beer drinkers caught on and it all rolled downhill from there. [Brewers Brent] Schmitty [Sapstead] and Hayden [Winkler] built Ol' Gil's recipe with one foot in the German bucket and one foot in the Czech bucket and just kind of got lucky with it. We just had to plunk money down on a new set of lagering tanks to keep up with its demand." 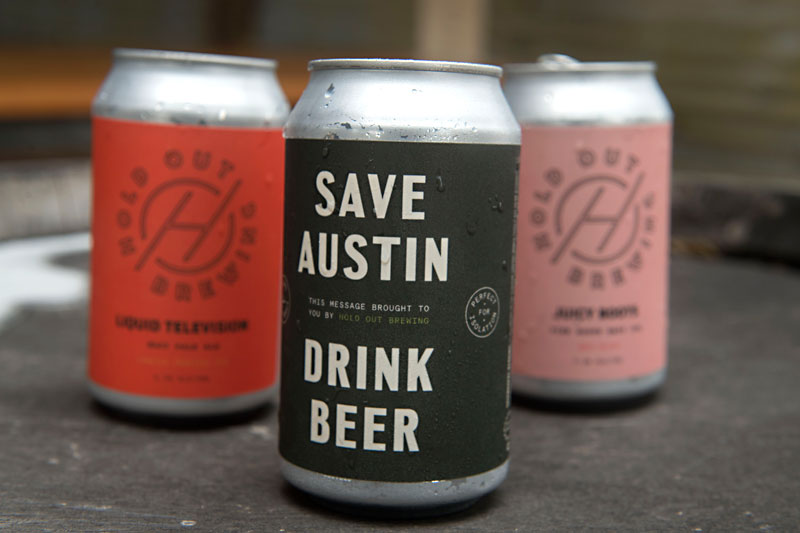 Photo by John Anderson
“The original plan was for on-site easy-drinking pale ales and lagers, and while we’re still producing that and staying true to who we want to be, we also want to put out a range of amazing beers every week that keep people coming back.” – Marketing & Hospitality manager Sheila Garcia

Still, the flurry of online interest wasn't limited to Hold Out's ambitious lagering program. By the Saturday of their debut weekend the brewery had curbside-delivered every available sixer of their inaugural ales – Thumb Puncher pale ale and Koala Take­down juicy IPA – too, requiring an unexpected one-day sabbatical for the Hold Out staff. You'd think given that kind of debut, a brewery would probably huff on a few cigars and drink gin the rest of the week like they'd just won a big away game, but by the following Thursday, Hold Out was back at it again with FOUR new – and by new, we mean four different – beers to offer a city who was suddenly paying very close attention to the hype. Amongst them, a brand-new Galaxy-hops-driven IPA, Spatial Awareness; Björn Again Texan, a pale ale utilizing the bright, sunshiny, and super current Norwegian kveik yeast; Suavemente wedding pale ale, which features a love story in every deftly hopped little can; and the low-key treasure of the bunch, Last Light, a dry-hopped porter that tastes like something you'd crave on a summertime English train tour between Lickypiddle-upon-Sea and Northsouth Netherwallop.

"Hopefully people are falling in love with a favorite beer," says Marketing & Hospi­tality Manager Sheila Garcia. "The original plan was for on-site easy-drinking pale ales and lagers, and while we're still producing that and staying true to who we want to be, we also want to put out a range of amazing beers every week that keep people coming back. We had a specific vision when we opened, but now we can open the box a little bit more. Even [Sapstead] and [Winkler] are seeing themselves growing quickly, and they both have years and years of experience between them. Next week, we'll have our first adjunct beer, called P.R.E.A.M.: Peaches Rule Everything Around Me."

And it is because of the dazzling brilliance of Sapstead, whom Hold Out marvelously plucked from Central Texas beer icons Real Ale, and Winkler, previously of the despairingly shuttered North by Northwest, that Hold Out is such a risk-free investment for Austin beer fans. Sapstead and Winkler stick to their reputations as makers of squeaky-clean and crushable low-ABV beers that tear through the summer density like light bedding. But then again, the spectrum of beers on display at Hold Out has demonstrated the range of Sapstead and Winkler with big pillowy hazy IPAs like the recently launched Liquid Television and Juicy Boots. Everything in the brewery's lineup is absolutely brimming with confidence. And with an adopted tagline of "Save Austin, Drink Beer," it's obvious that the brewery approaches each beer with a local mindset.

"'Save Austin, Drink Beer' was created in 2019 by our graphic designer Lauren Dickens, and our brewery name actually derives from that saying, although the joke is that we're named Hold Out because of our long delay," cracks Garcia. "But the name actually comes from the experiences of the six founders and the management team in and around Austin and their involvement with how the city used to be. The building itself is an old quonset hut built over a 1950s house in historic Clarksville, and it too has been able to hold out here over all that time. So [Dickens] produced 'Save Austin, Drink Beer' with the idea of saving old Austin, but [with the current global issues] we quickly realized we wanted to plant larger roots for the community, and so we picked a charity to represent [our tagline and donate to], and that is the Central Texas Food Bank."

Concludes Wright, "We're hopeful to bring back some of the vibe of the original wave of Downtown breweries that started with Waterloo, then Bitter End, Coppertank, and Lovejoys. We all have fond memories of those days in Austin and we wanted to [commemorate] the details of those casual taprooms back to when those types of places were still called microbreweries. We are hoping to try to re-create the spirit of that era of Austin. But we also want to appeal to the casual beer fan who might just want to have some dinner and try something locally made that is really tasty."

As Hold Out steadily opens their taproom hours to real, flesh-and-bone guests (and not just their automatic-gate minivans), the brewery is offering reservations for eight tables per night for up to six pals. You might want to update your MySpace Top Friends list, because Hold Out has curated the perfect beer-drinking experience, delayed only in its glamour by something as trite as a city waterline issue and something as devastating as an unprecedented global catastrophe. But for a brewery as clever and focused and precise as this one, it is an experience worth holding out for.

The Bistro at Lark & Owl Bookstore Is Making Georgetown Cooler, One Beer and Book at a Time
Magic happens when a brother-owned bistro and biergarten joins a women-owned bookstore