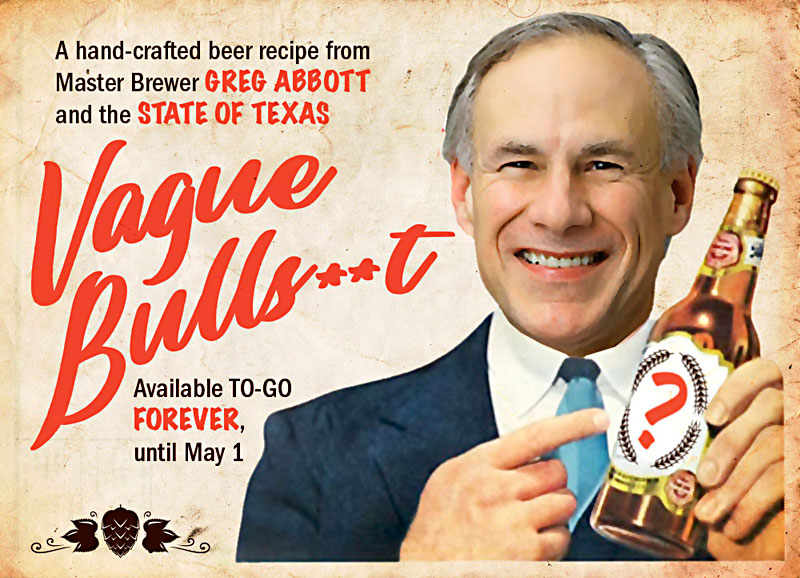 On April 28, Texas Gov. Greg Abbott tweeted, "Alcohol-to-go sales can continue after May 1. From what I hear from Texans, we may just let this keep going on forever. #txlege."

That's a jam-packed 23 words – both a waste of valuable Twitter characters and an almost certain work of fiction. Abbott's tweet says two things – one is already a reality, and the other will almost certainly never be. Let's look at the first part of Gov. Abbott's tweet: "Alcohol-to-go sales can continue after May 1."

This is no different than the March 19 guidance issued by the Texas Alcoholic Beverage Commission (TABC), which stated that restaurants with a mixed beverage (MB) permit could sell bottles of beer, wine, and spirits of no more than 375 mL on a "to-go" basis provided those beverages were sealed with manufactured seal. That covers both airplane bottles (50 mL) and half-bottles or half-pints (375 mL) used in the "cocktail kits" that have taken over the marketplace during the COVID-19 pandemic restrictions. The March 19 guidance from TABC also required that alcohol be sold with food, by an establishment that "[has] permanent food service capabilities at the premises."

Before Abbott issued Executive Order GA-18 on April 27, the one that "reopens Texas" as of May 1, he had issued multiple, sometimes overlapping proclamations, declarations, and executive orders to mandate Texans' response to the pandemic, reflecting the differing powers of the local, state, and federal government during disasters and emergencies as written in the statutes. Under those rules, there has been much confusion and lack of clarity as to which establishments were authorized to operate, and what kinds of operations are considered "Essential Services," as new measures have been put in place in the weeks since TABC issued that March 19 guidance.

Among those, on April 17, was Abbott's Executive Order GA-16, which took effect at 12:01am Friday, April 24, which stated that all retail services that were not "Essential Services" that had been allowed to continue during the crisis, and that may be provided through pickup or delivery to the customer's doorstep, were allowed to reopen. To define "Essential Services," GA-16 relied solely on the U.S. Department of Homeland Security's Federal Guidance on Essential Critical Infrastructure Workforce. The relevant section of that guidance includes 1) "Workers supporting ... retail that sells beverage products..." and 2) "Restaurant carry-out and quick serve food operations, including dark kitchen and food prep centers, carry-out, and delivery food workers."

While these workers were "essential," the DHS guidance didn't apply directly to the businesses themselves. Further, not all restaurant operations were "essential," only those pertaining to carry-out and quick serve food operations. As a result, the broad language of GA-16 gave all bars, restaurants, and brewpubs (and all other retail businesses) the ability to reopen. Further, by plain reading of GA-16 those businesses could sell their products "through pickup or delivery," without limitation.

This reading is furthered and strengthened by language two paragraphs later in GA-16: "In accordance with the Guidelines from the President and the CDC, people shall avoid eating or drinking at bars, restaurants, and food courts...; provided, however, that the use of drive-thru, pickup, or delivery options for food and drinks is allowed and highly encouraged throughout the limited duration of this executive order."

This statement can only be read one way: The governor clearly reopened bars, restaurants, and brewpubs. Otherwise, why would GA-16 have called out the need to avoid eating or drinking at bars, restaurants, and food courts? Customers were allowed to patronize them but not eat or drink at them, which was fine because the "use of drive-thru, pickup, or delivery options ... [was] allowed and highly encouraged throughout the limited duration of [that] Executive Order [which expired April 30, 2020]."

The morning of April 24 arrived with great fanfare. Bars, restaurants, and brewpubs all over the state rejoiced and tweeted and Instagrammed Abbott, thanking him for finally providing in GA-16 the lifeline they had needed since the crisis started — to be able to sell alcohol in containers they seal, including beer, wine and cocktails "to-go" with food.

You can guess what TABC did next. That afternoon, the agency released a new guidance to all license and permit holders, stating that retailers "should continue to operate as you have been operating in recent weeks. The order does not create a new special authorization to conduct pickup and delivery if Texas statutes do not currently allow your business to do so. Only alcoholic beverage businesses authorized by Texas law or a statutory suspension previously issued by Gov. Abbott can conduct pickup and delivery services." 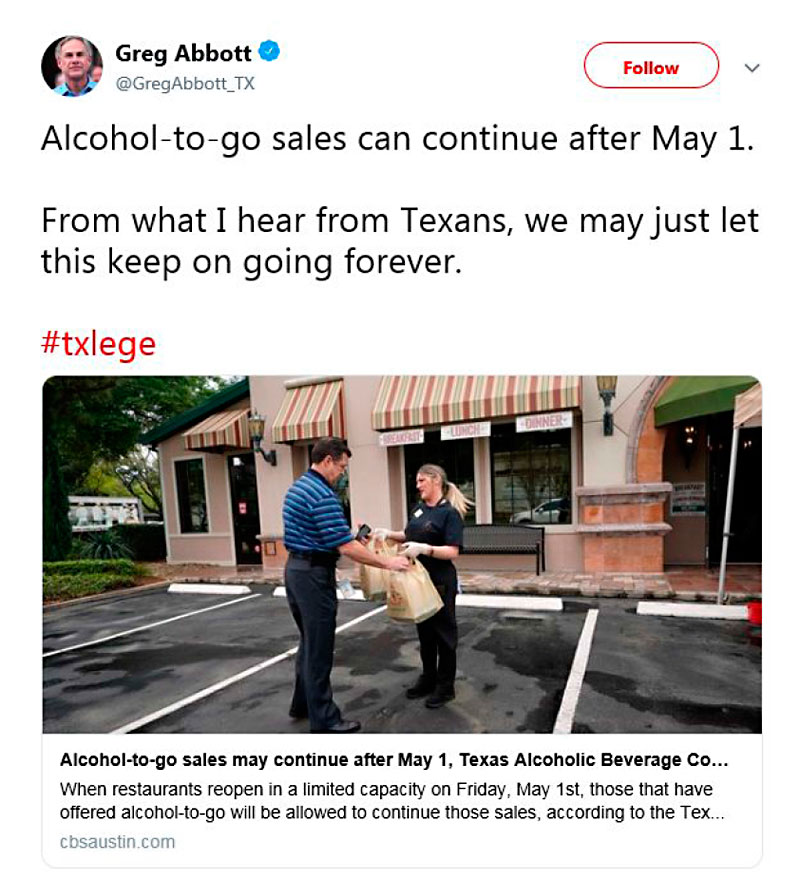 Bars, restaurants, and brewpubs all over the state rejoiced and tweeted and instagrammed Abbott, thanking him for finally providing in GA-16 the lifeline they had needed since the crisis started – to be able to sell alcohol in containers they seal, including beer, wine and cocktails “to-go” with food. You can guess what TABC did next.

The phrase "and have the authority to conduct pickup and delivery under current Texas statutes" does not appear anywhere in GA-16, so TABC had chosen to ignore the plain reading of GA-16 and enforce its more stringent regulations. The agency specifically emphasized that "Mixed Beverage (MB) Permit holders are still not allowed to sell drinks mixed at their businesses for pickup or delivery. Alcohol must be in manufacturer-sealed containers." The guidance also suggested that TABC would later issue more official guidance, and that the governor would make more updates to his orders on April 27.

That brings us back to the Open Texas plan announced by the governor last week via GA-18, which does several things relevant to this issue. It explicitly reopens restaurants, along with four pages of sanitation and safety standards required for restaurants to operate – and it includes a clear and unambiguous definition of what businesses are "restaurants" to which the order applies.

The Texas beverage code that TABC enforces does not define "restaurant" – in fact, the word is only used eight times in the entire code. What GA-18 includes instead is language from the concealed-carry statutes in the Government Code, wherein a business whose sales are more than 51% alcohol has to post a sign alerting gun-carrying Texans so they know not to bring in concealed weapons.

As a result, the right to operate now belongs not to establishments that have vaguely defined "permanent food service capabilities," as TABC had indicated in its March 19 guidance, but to food businesses "that are not required to post the 51% sign required by the Texas Alcoholic Beverage Commission." There is one exception to this rule, for holders of a Food and Beverage Permit (FB) permit, which is essentially a promise that a new establishment will have at least 40% food sales, before it posts the bond required for an MB permit.

As a result, GA-18 is now closing Texas businesses that had been open before, under the state's prior crisis measures. The Governor's "Strike Force to Open Texas" includes as its restaurant industry representatives Tilman J. Fertitta, chairman/CEO and sole owner of Landry's Inc., and Balous Miller, owner of Bill Miller Bar-B-Q – both giant operators in the industry who have little reason to make life easier for their smaller competitors. Landry's announced it would reopen more than 130 of its Texas restaurants in Texas on May 1; the conglomerate's brands include Del Frisco's Grille, Joe's Crab Shack, McCormick & Schmick's, Rainforest Cafe, and Saltgrass Steak House as well as its namesake eateries.

For Abbott to tweet "alcohol-to-go sales can continue after May 1" is akin to saying "for the few of you that can breathe through a straw, you can continue breathing. Good luck with that." (Restaurant sales in Texas, according to MarginEdge, have declined more than 65% since March 1; 40% of establishments have closed outright.) Now let's break down the second part of that tweet: "From what I hear from Texans, we may just let this keep going on forever."

Without question, Abbott's office has heard from Texans who want cocktails to-go, and from Texas restaurants that need cocktails to-go to survive the COVID-19 crisis. Those restaurants, industry insiders, and stakeholders in other states all agree that beverage sales in containers sealed by retailers are the only viable solution; cocktail kits and small bottles do not maximize anyone's dollars, whether manufacturer, wholesaler, distributor, or restaurant. Abbott knows this and could, through direction to TABC, allow such sales right now. He has not.

Abbott uses the word "may" in his tweet, as he did in GA-16 about retail services "that may be provided through pickup." Despite that order's very clear language, the TABC guidance that followed ignored it. Should anyone put stock in what Abbott "may" let happen now? To go on "forever" would require action by the 87th Texas Legislature in 2021 – hence Abbott's hashtag, which appears to shift responsibility onto a future bill that we all should expect to fail.

That's because the existing players in Texas' alcohol industry, with its three regulatory tiers, would not welcome alcohol-to-go as a matter of right. They include:

Big beer distributors quietly but strongly oppose any changes to the three-tier system, however small. As the beverage market shifts toward spirits, wine, and craft beer, they want to avoid sliding down a slippery slope, and they contribute heavily to the governor's campaign (and those of every influential legislator) every election cycle.

Package stores might support beverage delivery as a temporary measure during the crisis but would argue very persuasively that if such sales were permanent, then consumers would buy what are now on-

premises drinks to-go (whether pre-mixed or as kits) instead of picking up their ingredients at a liquor store.

Spirit wholesalers, who supply every drop of liquor to the package stores, are among the most powerful industry players in Texas; the two groups are almost always aligned on policy matters.

National and global manufacturers would have no problem supporting prepared cocktails to-go, but there is no profit to them in selling small bottles through restaurants – certainly not enough to make it worth cannibalizing package-store sales. (They could make it work with plastic bottles, but no quality brand wants to do that.)

Very few Texas distillers even package 375 mL bottles, let alone 50 mL bottles; making these the only way they could sell their product through restaurants would significantly increase their costs on top of the losses they've experienced during the COVID-19 crisis. They would fight it with everything they have.

Texas craft brewers, which are not allowed by TABC to sell growlers to-go even though it's allowed by the governor's prior orders and even as their kegs are going stale, have zero reason to support the status quo becoming permanent.

At the end of the day, there is zero chance that Texas will just "let this keep going on forever." If Abbott wants to see "Texans helping Texans," he should tell them the truth and offer real help to the hard-hit beverage industry, not a 140-character marketing appeal.

[Editor's Note: Kareem Hajjar is a law partner with Hajjar/Peters LLP, and has been working with restaurants and bars in Austin for over 16 years. Hajjar also runs the Facebook group Margs for Life TX.]