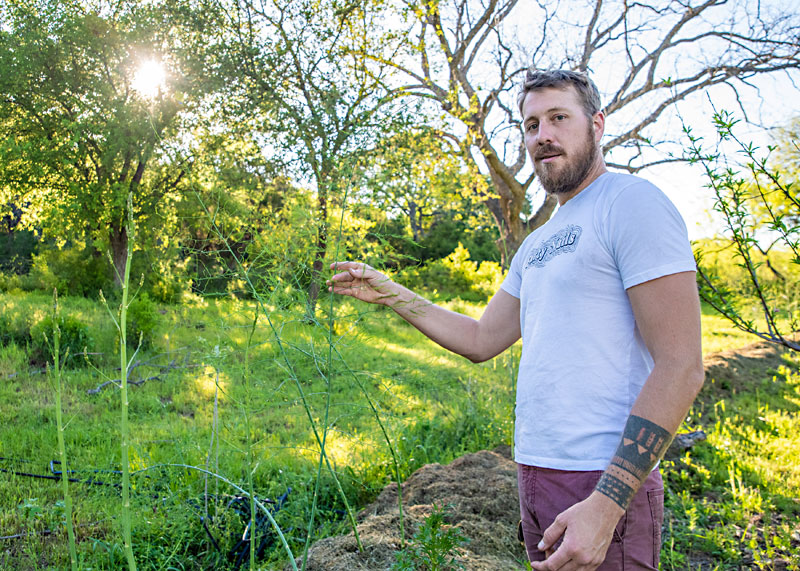 Before Neil Brosig was planting and maintaining a Central Texas food forest – two, actually – he was in the Navy for "five years, two months, and 27 days," he explained. "When I got out, I was separated from all my friends and I started on this singular journey – college, new job – and it was all really dissatisfying."

Transitioning from the military led him to Tulane (on the GI Bill) for music composition and then to the mountains of North Carolina, where he worked as a contractor in Asheville. "I wish I had known then what I know now, because I probably would've never left. It was a tiny little life that was super happy," he said. And then a new door opened: When the boss offered to teach Brosig his trade, environmental consulting, Brosig moved to Los Angeles to start over yet again.

His new "very intense" job entailed visiting different properties, testing materials, identifying toxicity levels, and informing whether the space was "permissibly toxic in the state of California." Brosig said, "It was really educational. I didn't really know how toxic the world actually is." He racked up a ton of field experience until yet another life-changing scenario presented itself, this time whizzing by while he was sitting in his car stuck in L.A. traffic. 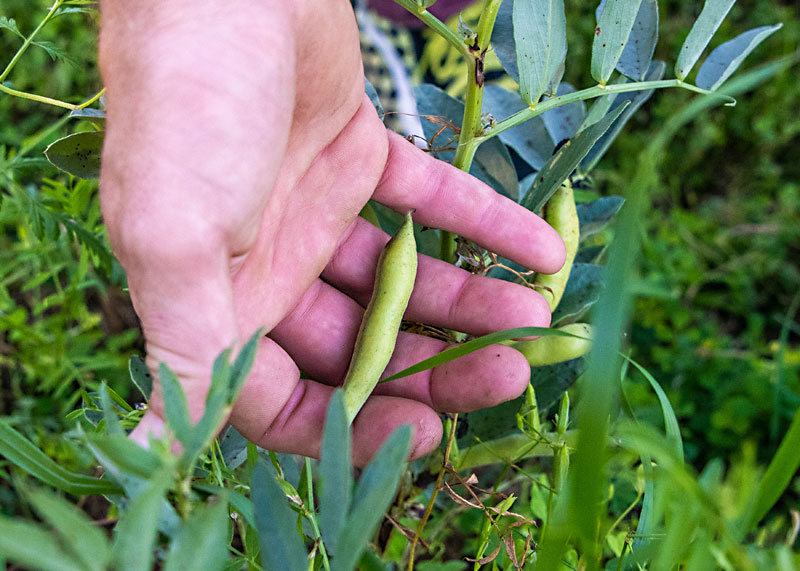 Fava beans in the food forest (Photo by David Brendan Hall)
“I needed to restart my life and recover from serious injuries, but I needed to start working on something. I figured, ‘Well, there’s nothing bad that could come from planting a garden.’”

"I would see these guys fly by on motorcycles and it dawned on me that I only needed a backpack to do what I was doing. I could just jump on a motorcycle and get so much done, so much faster. So I bought a motorcycle and started crushing it – I doubled the company profits in 10 months. But I was playing the odds all the time, blasting in between lanes and stopped cars – always in a hurry, always angry. And one day it caught up with me."

Brosig was speeding down the freeway on his motorcycle at 80 mph when a car cut him off to illegally exit out of the HOV lane. When he swerved to avoid it, he hit the back of a stopped car. Somehow, he lived, but "the crash basically destroyed [his] life." He lost his job and had to move in with a friend to recover, and then home to Texas to start all over. Again.

"It was a pretty sobering experience and put into perspective the choices I had made and what put me in that position. I was obviously thankful to be alive and I have a second chance at life because of it. It made me rethink all the reasons I had made those choices, and how I should not make money the driving force in my life. I tried to look at things that were missing – community, friendship, and closeness to the earth. Things like that are really healing and provide a sense of security in times like that."

Brosig grew up here and decided his return would be an investment in himself. "I needed to restart my life and recover from serious injuries, but I needed to start working on something. I figured, 'Well, there's nothing bad that could come from planting a garden.' I sucked at it at first but I just kept plugging away at it because I needed to. I had to." 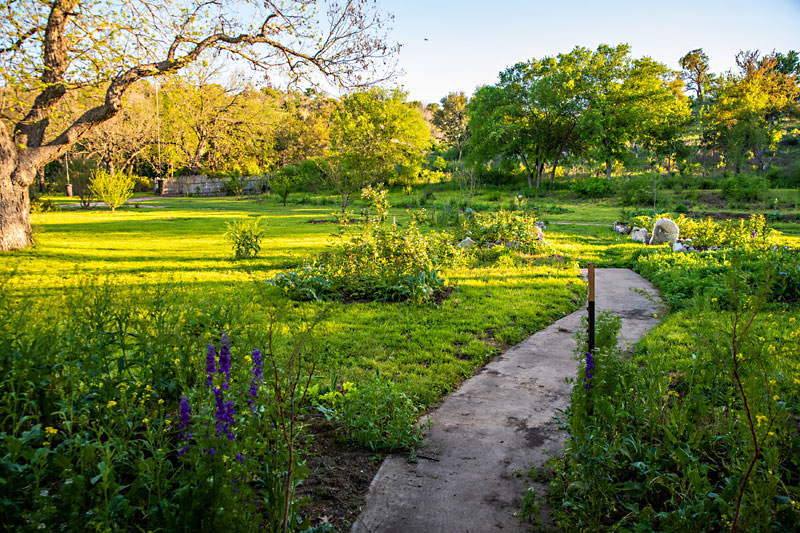 Through his new personal research project, Brosig discovered permaculture ("this concept of building an ecosystem that requires less energy as [it grows] and as time goes on") and it felt right. Next, Korean natural farming, a concept that utilizes indigenous microorganisms to produce fertile, high-output soil without herbicides or pesticides. He still wasn't working, at least in the same way he'd always known, and had to live off of what he could grow and sell at the farmers' market, figuring out how to do things for cheap or free. "So I just started putting together these different schools of thought into something that is practically applicable to any sort of property. And I figured that concept out and focused it down."

Soon after, his life changed again: Brosig met Taylor Hall, executive chef at Apis Restaurant & Apiary, at the farmers' market. "We became really good friends, and now he's given me the opportunity to build a food forest at Apis," Brosig said. "The project is sourcing everything that I can from the earth for free and using materials [on-site], and just trying to be as ingenuitive as possible. And I'm filming it all."

This new food forest is the second iteration – he's currently living on his first food forest on several acres in Spicewood. "I'm obviously passionate, borderline obsessed, with this idea, and now is the perfect time to distribute the information. It puts more security in my life as far as community and sharing." The very things he'd been searching for all along.

How is a food forest different from, say, a backyard garden or large farm? Brosig says, "A food forest incorporates concepts from gardening, orcharding, and berry growing. You're basically designing a forest of food that has fruit-bearing trees; then, further down, you do berries and then perennial vegetables like artichokes and asparagus, then annuals like lettuce and tomatoes and things like that. It's a fully incorporated design where everything is food. You plant trees throughout the year that fruit at different times. You design it to be as self-serving as possible so it can grow on its own." 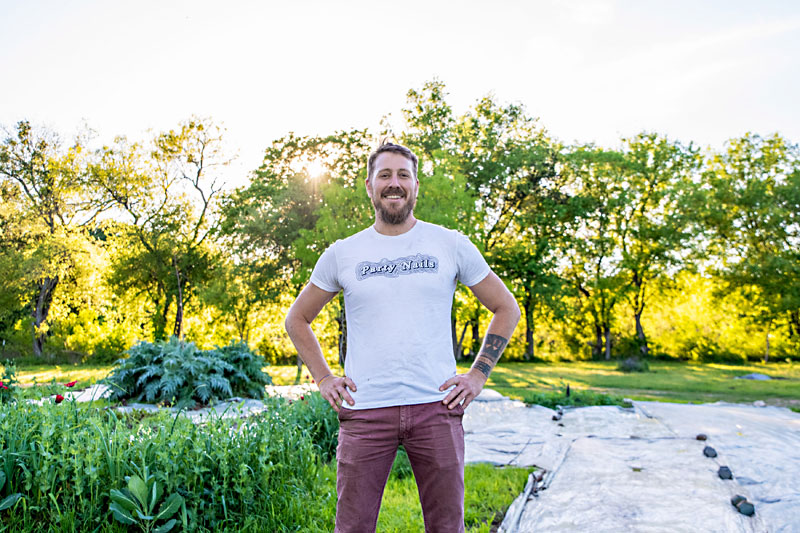 At Apis, a property formerly used as a plant nursery, there was a raised garden bed and other bits of agricultural infrastructure. "People have put in effort that's just fizzled out over time because it's a lot of work and you need dedicated people to do that ... and that happens to be me. [Just a few weeks ago] I got the beds [re]filled with soil that I sourced on-site and amended from things on my property. I started planting sunchokes; I have a bunch of fig trees and mulberries that I have propagated because they're free and unique; I have peach pits that I'll grow that I'll graft and move there."

The idea is that once his projects at Apis really get growing, the restaurant will have enough produce to use in the kitchen, and Brosig can sell the overflow at market. He added that urban and rural foraging is a core principle of his food forests, and it's something anyone can do, even in these days of social distancing – something he has plenty of space for on his property. "I keep an ear and eye out for free stuff. I just drove around Austin and got a bunch of loquat cuttings; they grow everywhere, but not as much in the Hill Country."

And if it's not yet apparent that Neil Brosig is a momentum kind of guy, he's sharing all that priceless self-taught knowledge of seeds and soils on his newly launched YouTube channel. In his first episode, released just this month, Brosig talks about his background, "so people can see where I'm coming from and that I'm not trying to rip anybody off – I know what I'm talking about." There will be videos on how to get a garden established, fruit tree pruning, "every little aspect of what I've been doing [with these food forests]. I've had a camera on for seven months. And it's the perfect time to sit down and work on that because everybody is locked down. So it's a good motivator to get started."

Brosig's one-man band includes all of the hands-in-the-dirt components, plus filming and editing all of the content. Oh, and that Tulane degree we mentioned? He's finally found a use for that knowledge, too: recording all of the music for his videos.

When asked why we should all consider planting something, anything, right now and more than ever before, he said, "Security. Assurance. Everything is going crazy right now and in order to get control of something, you have to get your hands in the earth and make it grow."