The Dirt on Grubs and Composting 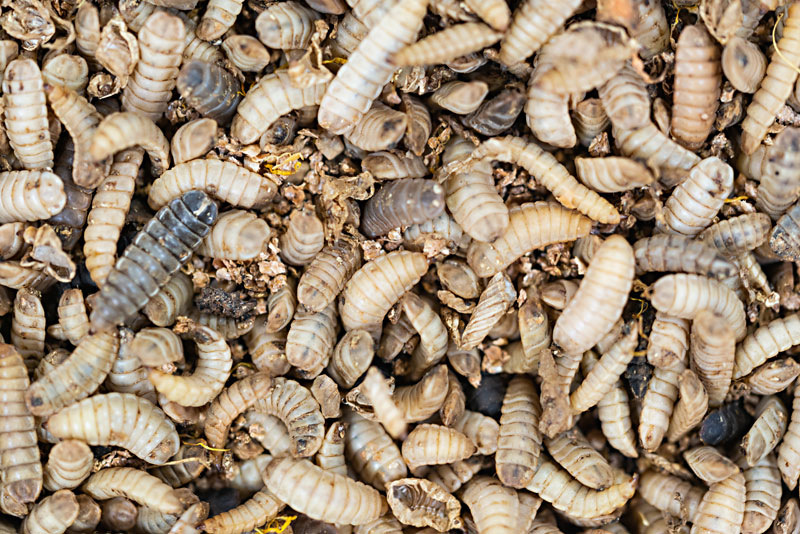 The agrarian community has been abuzz about the black soldier fly for a while, hailing it as the hot new sustainable fuel. The fly's larvae – grubs – provide chickens and pigs with food that they are naturally adapted to eat and are so rich in protein that they don't need to eat as much, which further cuts costs. Using insects as feed also allows corn and soy, the most common ingredients in poultry feed, to be used for other purposes, such as human food or clean energy sources.

Black soldier fly larvae (or BSFL) was approved by the U.S. Food and Drug Administration in 2018 to be used for poultry feed, and since then national companies such as EnviroFlight have started capitalizing on the grub. However, the European Union has concerns about using the BSFL as feed; according to a "General Food Law" legislative package, there are restrictions on what is fed to animals that "are kept for the production of food," and these apply to insects intended for animal feed use as well: "Such insects may only be fed with materials of vegetal origin. Some exceptions are however admitted for materials of animal origin such as milk, eggs and their products, honey, rendered fat or blood products from non-ruminant animals. The feeding of farmed animals with other slaughterhouse or rendering derived products, manure, or catering waste is however prohibited."

One local vendor using BSFL, GrubTubs, has been entangled with the city of Buda and the Texas Commission on Environmental Quality due to "over 300 resident complaints ... 58 alleging criminal nuisance" received last year, according to David Marino, the city of Buda's communications director. In May 2019, the Buda City Council updated its odor-nuisance ordinance, in response to complaints about GrubTubs' operation, to apply up to 5,000 feet outside the city limits. One criminal complaint went to trial in municipal court, where a jury found GrubTubs not guilty of violating the ordinance. GrubTubs is still operational and used by the likes of McGuire Moorman Hospitality, one of the giants of the hospitality industry in Austin.

The GrubTubs issues recall earlier odor complaints against HausBar Farms, which prompted a 2013 update to Austin's urban farm code. The odor cited by Govalle neighbors and community activists came after two years of HausBar's raising, slaughtering, and composting the remains of chickens without incident, which was at the time all legal under city code; the city of Austin now prohibits the composting of animals in residential areas to avoid environmental injustice concerns.