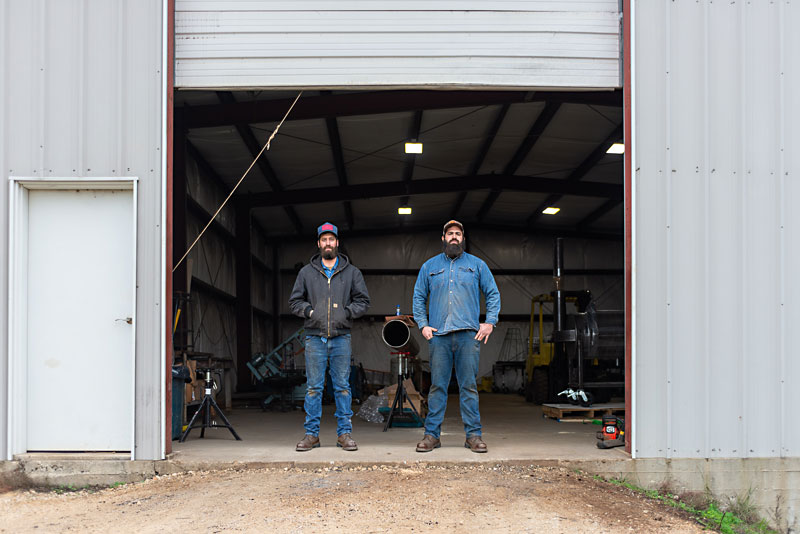 For Texas barbecue lovers who take matters into their own hands, cooking a brisket that's up to par with the current masters of the craft is serious business – and the right smoker is key. Enter Mill Scale Metalworks.

In Central Texas, Mill Scale creates custom smokers worthy of heirloom status. Co-owners and brothers Matt and Caleb Johnson are producing work so far beyond the thin tin jobs at Home Depot that it's almost a travesty to mention them in the same sentence. Whether it's a 94-gallon backyard model, a smaller yakitori grill, or a thousand-gallon monster meant for the largest of commercial operations, the steel coming out of Mill Scale is on a whole 'nother level.

“Because of the fast-paced world that we live in, we’re trying to move things back to cooking with fire, slowing down that process, thinking about the food, taking notes from other chefs, kind of reconnecting people to food.” – Matt Johnson

The brothers are joined by Matt's wife Annie as operations manager and kindred soul Matt Seeker as the third welder. This quartet processes tons of metal each year, in and out of their Lockhart shop. But before food ever gets involved, the business at its heart is a simple welding operation.

"Welding is almost a lost art in my generation," Matt Johnson said. "That's really our background. We grew up blue-collar. I think that some of these trades have been lost. My dad and his generation could fix anything."

But of all the things they could be working on, the Mill Scale crew has dedicated themselves to cooking devices that use live fire. The heartbeat of their business is building off-set barbecue smokers fabricated and salvaged from decommissioned propane tanks. That overlap with the culinary world imbues the work they do with something special.

"The cool thing about welding and fabrication is that, because of what we do, there's a very tangible monument of art that will last longer than us," Matt said. "If we were welding handrails or structural stuff, a lot of people appreciate it, and it has a function, but food has its own power. You remember that time when you were grilling with your dad and you smelled that smoke – it triggers memories.

With home versions of their smokers going for multiple thousands of dollars, the existence of a market for their products says a lot about what this type of customer values. Matt explained, "I think now there's a growing appreciation for craftsmanship. I love Amazon. That's a convenient thing that's hit our generation. Our kids are going to grow up expecting things in two days, right? Because of the fast-paced world that we live in, we're trying to move things back to cooking with fire, slowing down that process, thinking about the food, taking notes from other chefs, kind of reconnecting people to food."

While Caleb now lives in Lockhart, Matt and Annie still live in East Austin, and that connection to the ever-booming Austin food scene informs a lot of what they do: "There are so many talented chefs coming from all over the country, coming to Austin and really elevating the menu and the expectations of this market. We're seeing it in barbecue, too.

"Because we were starting to hang out with chefs and pit-masters and barbecue guys, we were like, 'Let's start building barbecue pits.' So we were able to take that perspective of design, clean lines, drawing people in closer to look at details, having multiple functioning components, and trying to keep it simple."

Because of their dedication to their own craft, the level of quality in these pits comes in sharp contrast to smokers from days past: "Barbecue in the Nineties and Aughts got really gadget-y: candy paint jobs, infrared elements. Now there's apps on your phone. You almost can't screw it up." 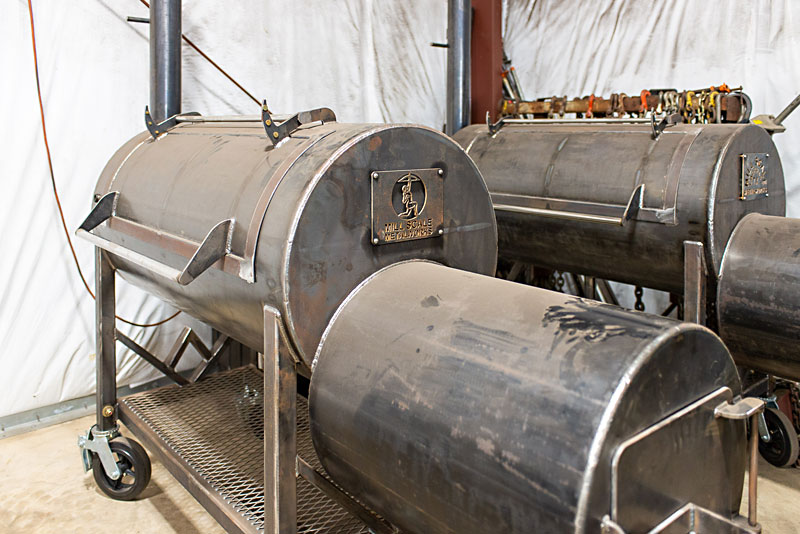 And this superficiality flies in the face of old-school Texas barbecue. "You come out to Lockhart, you go in that smokehouse, these guys are cooking for 16 hours. They're spending the night on a cot next to the smoker. There's so much intention and dedication to that craft that we were just drawn to it. All of those things, we've been able to apply to the design of our smokers."

The work Mill Scale does is very much of a piece with the contemporary crafts movement. In Austin, seeing someone spend more for a piece that's American-made – or even better, Austin-made – is not a rare occurrence. Matt thinks this has to do with modern life and its distance from manual labor.

"A lot of people work in cubicle, and there's a disconnect [from] working with your hands and seeing something in front of you," Matt said. "A lot of people are using their dollar to buy that one hat that'll last twice as long and has a story behind it. Maybe you meet the maker who made it and there's more of a connection to it."

In Austin, Mill Scale smokers can be found at Lamberts, Banger's, and JNL Barbecue at Buzz Mill Shady. Smokers are also shipped around the world, with one happy customer receiving his all the way in Sweden. And with a waitlist of almost two years, Matt and Caleb recognize just how much their products mean to the people that end up with them, and that quality over speed is a necessary part of how they work.