Sandwiched between northeast India and southwestern China is a tiny strip of land about the size of Arkansas – the country of Nepal. Home to Mount Everest, medieval cities, and sacred Buddhist monasteries, Nepal is a cultural gold mine with a very specific culinary tradition. 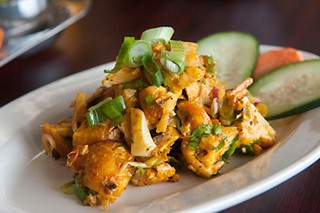 Sandwiched between a karate school and a paint-it-yourself pottery studio in a Cedar Park strip mall is a tiny restaurant with 11 tables. The decor is sparse and utilitarian, although there are a few paintings of Buddhist temples and Himalayan peaks on the walls. Yak & Yeti's Indo-Nepalese menu showcases the complexities of the cuisine. 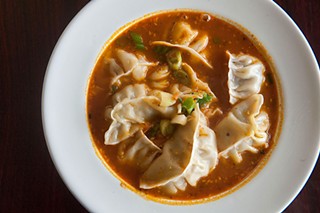 The food of Nepal is informed by specific cultural, economic, and geographical forces. Because it's situated in the Himalayas, agricultural output is primarily crops like buckwheat, millet, high-altitude rice, and potatoes. The cold climate translates into hearty soups and stews with hardy ingredients like lentils and starches, and because about 80% of Nepalese people practice Hinduism, you won't find beef or pork on the menu. My first visit to Yak & Yeti (in the former Dolphin Indian Kitchen spot) was at the end of a very busy Saturday, when I was exhausted and wanted some warm, comforting curry. The restaurant was about half-full, and a friendly young man supervised the dining room, with a little help from another man who popped in and out of the kitchen occasionally.

I ordered far too much food for the family, starting with a pair of triangular vegan samosas heavily seasoned with coriander. My husband opted for saag paneer and chicken tikka masala, which were both on par with any of the big-name Indian restaurants in Austin. I chose the vegetarian Nepali khana set, a combo platter similar to an Indian thali, served on a metal tray with separate bowls and compartments. The assortment included spicy-tart mustard greens and radish pickles (achar); a nutty yellow dal; aalo bodi tama, a traditional and somewhat sour curry of bamboo shoots, potatoes, and black-eyed peas; rice; and a cauliflower-potato curry. The flavors were spicy and bright, with less cumin and more cinnamon than I'm accustomed to. Not sure if that met the comforting portion of the brief, but it was unique and delicious. (There's another combo plate on the menu called the Newari khaja set – the Newars are an ethnic group native to the Kathmandu Valley, known for their intense flavors. We did not try that one.)

We also tried the vegetable biryani – a bridge too far in terms of how much we could responsibly or comfortably eat – and we enjoyed the spicy rice, studded with chunks of potato, cauliflower, onions, and more. My only criticism of this dish was that the spices and seasonings were inconsistently dispersed throughout, with bits of unseasoned white rice here and there.

There's plenty here for (most) entry-level palates, too. My teen chose the chicken chow mein (an influence from Chinese cuisine). It was snappy and salty, but not in a "I've had so much sodium I can see Jesus!" sort of way. My tween had rice. Can't win 'em all. I tried a few bites of kheer sweet rice pudding for dessert; again, it was comparable to other Indian restaurants around town.

[The Sadheko momo] are tart and just the right level of spicy. Perfect for sharing... or not.

I returned for midday lunch with a girlfriend, and we both opted for the lunch buffet, which, at $11, is a reasonably priced, low-risk introduction to Nepalese food. The same friendly young man (who we learned is the owner of the restaurant) hovered around the sparsely populated dining room, offering drinks and fresh naan. We skipped over the chafing dish filled with baby carrots and tired cucumber slices, choosing instead to load our plates with the freshly made dishes, including a vegetable curry, a creamy and delicious dal makhani, and fragrant channa masala. The vegetable pakoras were delicious, but my friend's tandoori chicken was dry. She loved the spicy and crispy Chicken 65, despite the fact that it was lukewarm.

We capriciously decided to order a bit off the menu and decided on the sadheko momo, the Tibet-inspired dumplings that are a cornerstone of Nepalese cuisine. These were, hands down, the best thing I ate at Yak & Yeti. Eight dainty rice-paper purses are filled with peas, cauliflower, and cheese and steamed, then sunk into a bright tomato-­based chili sauce and topped with fresh ginger, garlic, and cilantro. They're tart and just the right level of spicy. Perfect for sharing ... or not.

We didn't try any dessert at lunch, apart from a few bites of the sooji (rava) laddu on the buffet. These mango-colored sweet balls are made with semolina flour (in this case, rava), sugar, and milk, fried, and then rolled in toasted coconut. Sadly, these weren't as flavorful as we'd hoped. I very much enjoyed my mango lassi, though, which was sweet and nearly thick enough to be a milkshake.

If I lived in Cedar Park, Yak & Yeti would probably be my go-to when the family craves Indian/Nepalese food. Would I make a special trip (a half-hour drive from my home)? Probably not. But I'm certainly glad I discovered this tiny little shop in the northwest suburbs and expanded my horizons in the process.