Madhu Chocolate puts an Indian twist on a classic treat 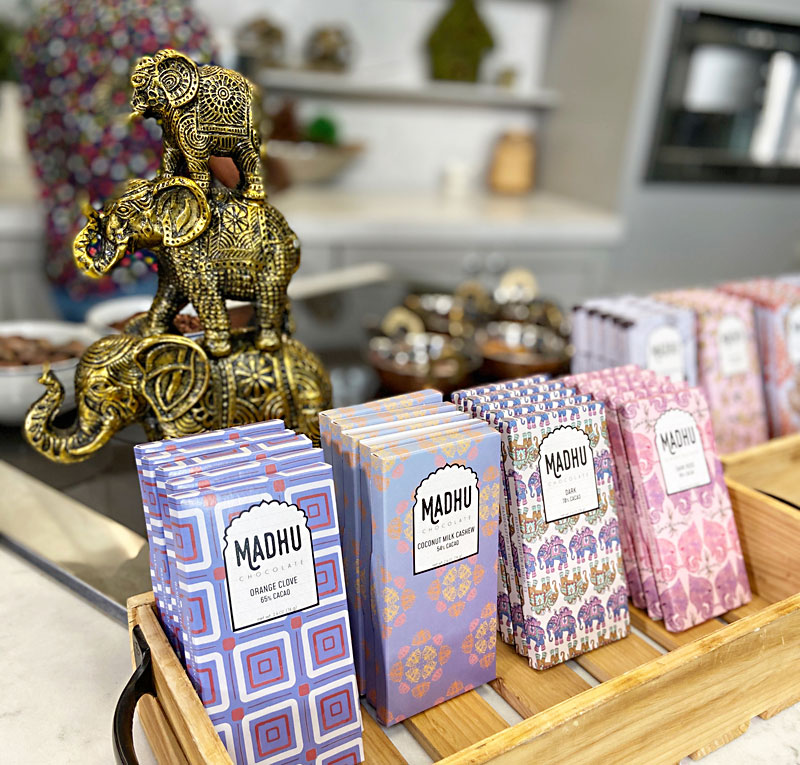 The small room smells like lemons. Not like chocolate, surprisingly, but lemons. That's because slices of lemon will be added to the chocolate for the newest bar – lemon and coriander – created by Harshit Gupta and Elliott Curelop for their Madhu Chocolate company. And now the smell makes perfect sense.

Not just sense, but perfect sense, because the lemon-and-coriander bars will be joining the other Indian-spiced flavors of Madhu bars – the rose-and-pistachio, the saffron, the dark masala chai, the coconut-milk-and-cashew, and so on – and, from what we've tasted of the company's offerings thus far, a new addition of that sort is nothing less than a logical conclusion. Or maybe even what you'd call a genius move. Because these guys, who moved to Austin from Seattle in 2016, who weren't really planning to start a chocolate business, this pair of chocolatiers knows what the hell they're doing.

"We have a very distinct identity to our chocolate," says Gupta, who relocated in 2008 from Jaipur, India, to the U.S. "When we were thinking about this entire thing, we didn't want to make just another chocolate – like, oh, 70 percent from this country, 80 percent from this farm – we didn't want to get in that same loop, because that's already there. You go into Whole Foods or Central Market and there's a huge wall of chocolate doing that already. We wanted to do something different, and we wanted to introduce these Indian spices. Not to take the chocolate experience out of it, but to include the spices into it. So we do it in a way that the spices don't overwhelm the palate, so you can taste the chocolate."

"When you look at Indian chocolate in America," says Curelop, "people default to a certain familiarity. So there's a lot of garam masala chocolate, which, I don't know, but we're not going to be making that anytime soon."

"Garam masala and all of that," notes Gupta, "those are attributes of savory food and don't go so well with sweets. But cardamom, saffron, pistachio – these are all good with sweets. We use them in hundreds of desserts which we have in India. So our chocolates have a parity with some kind of Indian dessert – you taste one and you're like, 'Oh, this tastes like kheer,' or something like that."

And when Curelop says "we," he means exactly that: It's just him and Gupta, working with beans sourced from the Tumaco region in Colombia. Even now that they're operating commercially, even now that their wares are featured at the Austin airport and being carried regionally in Whole Foods Market, it's still just the two of them working out of a few repurposed rooms in the Rentsch Brewery on the north end of Georgetown, cranking out all those rectangles of shiny brown and delightfully spiced goodness. "What happened was," says Gupta, "we started out in the farmers' market at Mueller. And we were making the chocolate in our home, so we were under that cottage law kind of thing. We started in September of 2018, and we knew that to move beyond the farmers' market – because of the law – we had to move into a commercial space, to start selling it to wholesale and retail and all that other stuff. But, that September, we were making 40 bars a day, and they were selling well. And then, around November and December, we started making 80 a day."

Curelop laughs. "You get to the point where you can do it blindfolded and backward," he says. "You don't even have to look."

But now the industrious treatmongers – who named their company Madhu because that's the Indian word for "honey" and "sweet," and it's also the name of Gupta's mom – now they're looking to the future. "You can do a lot with just two people, that's for sure," says Curelop. "But as we grow, yes, we've started looking to find people for part-time employment. Because it's turned into a seven-days-a-week thing, a 10-hours-a-day job. We've reached the point where we realize, yeah, we're gonna need help eventually."

"It's no longer a farmers' market kind of thing," says Gupta. "When we first started making chocolate, we weren't thinking, 'Oh, we're gonna make a business out of this,'" says Curelop. "It was more, 'I like to tinker with stuff. This is a fun hobby.'"

"We were looking to have our own business in some form," says Gupta. "We just didn't know what it would be."

Well, as the orders continue to flood in, they're certainly aware of it now. And if you didn't know of Madhu Chocolate before, dear reader, we can recommend making an acquaintance with any one of their wonderfully packaged bars sometime soon. Unless, that is, you have some odd aversion to ... flavor?

In honor of Valentine’s Day, the Madhu guys are hosting two bean-to-bar chocolate-­making classes on Feb. 12 and 13 in collaboration with locals Two Hives Honey and Desk Plants. For more info on the classes, and where to buy the chocolate, see www.madhuchocolate.com.

A version of this article appeared in print on February 7, 2020 with the headline: A Taste of Madhu