A Beginner’s Guide to Persian Food in Austin 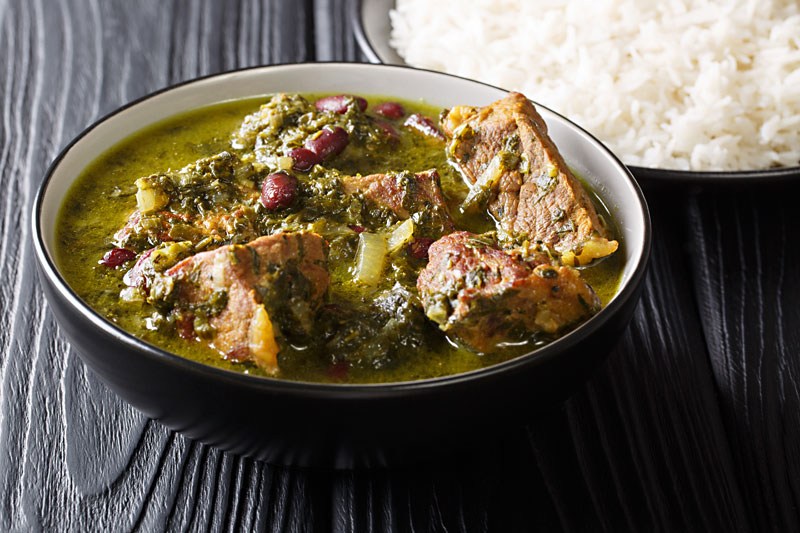 Persian food is incredibly diverse, with historical implications shaping the cuisine for centuries. American diners tend to lump it in with neighboring fare, but designated Persian food combines flavors of the Far and Middle East with ingredients acquired via the Silk Road (trade routes that run through what is now Iran), bringing in Mediterranean, Indian, Chinese, Greek, Turkish, and Lebanese influences. Persia was the name of the country of Iran before the revolution, and the Persian diaspora often refers to the cuisine as such to acknowledge Iran's different native ethnic groups that contribute to the culinary culture.

Balance is perhaps the most important Persian food philosophy, adhering to the "food is medicine" ethos by working with both gharmi (heat) and sardi (cold) to determine recipes. Herbaceous and sour elements pair with a hearty menu of rice, veggies, and meats (though much is vegetarian), and seasonality is the name of the game, with multilayered flavors that enhance everything on the table and a colorful, health-conscious core. The national dish of Iran is chelow kabob, or steamed rice with skewered meat.

Rice: major staple, often long-grain basmati, served with virtually every dish. Many say that it's traditional in Iran to offer the crust – golden tahdig, or the crispy bottom layer of rice that sticks to the bottom of the pot – to guests, another example of high hospitality in Iranian food culture.

Kabobs: It's pretty widely accepted that kabobs – skewered small chunks of lamb, chicken, fish, beef, usually cooked over flame – originated with ancient Persian soldiers, although dishes such as Turkish doner kabobs, and other iterations, are attributed differently. (With kabob-e barg, the meat is a fillet; in kubideh, the meat is ground.)

Torshi: Think pickled veggies, sour cherries, vinegars, dried limes; this is a big deal as it utilizes fruit acids to cut the richness (and animal fats) and aid in digestion.

Yogurt: another critical component, with herbed versions galore. Dried yogurt is called kashk and is used in dishes like eggplant dip. A popular drink, doogh (pronounced "duke"), is a thinned yogurt often mixed with mint, salt, and either sparkling or flat water, and it's great after a heavy meal.

Tea: all day, every day; Iranian tea, such as beloved chai, is brewed with rose petals and served strong with a reddish-brown color, sometimes sweetened with a sugar cube.

Stews/soups: Stews (served with rice) make up a large part of the cuisine. Ghormeh sabzi is very popular with its herbaceous and sour notes (dried Persian limes!) as well as ingredients such as pomegranate molasses, ground walnuts, and chicken. Ash is the Persian word for soup, which is served thinner than stew but thicker than broth.

Dessert: Baked goods feature nuts, rose water, and saffron. Other treats include faloodeh, a cold dish like sherbet, flavored with rose water and topped with vermicelli noodles; nane shirini, a Persian sugar cookie; and almond brittle made with rose water, saffron, and pistachios.

If you're keen to attempt to create these dishes and techniques at home, try one of the cookbooks from acclaimed chef Najmieh Batmanglij, often referred to as the grande dame of Iranian cooking: Cooking in Iran: Regional Recipes and Kitchen Secrets; Joon: Persian Cooking Made Simple; Food of Life: Ancient Persian and Modern Iranian Cooking and Ceremonies; and several others.

And while Roya won't open until 2021, Austin is fortunate to have several other restaurants serving up amazing Persian food. As a bonus, kabobs are pretty popular around town, even when not classic Persian.

Serving traditional Persian food since 2005, with a long list of kabobs (all served with basmati and broiled tomatoes), stews (like the ghormeh sabzi), and many Greek dishes to boot. www.shandeez.com.