Mueller's artisan cheese spot offers food for a cause 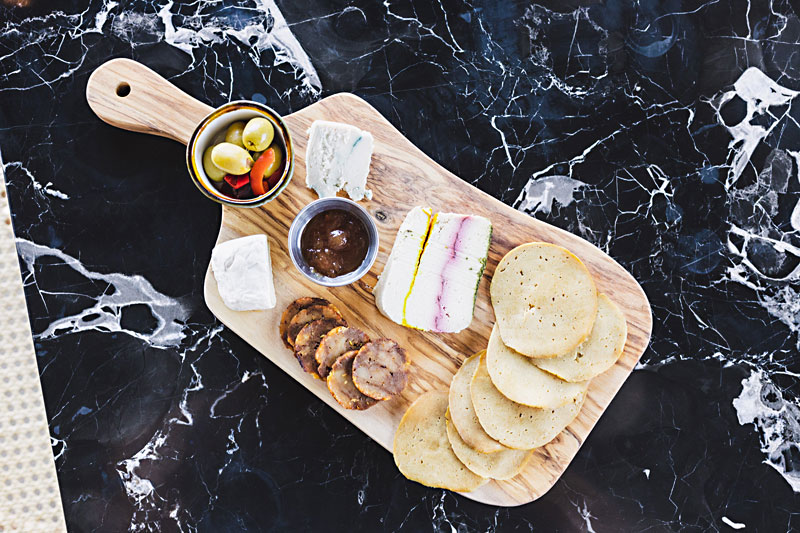 Veganism is often stigmatized as hippieish, uncultured, or alternative. And to be fair, that's sometimes the case – wheatgrass tonic, beet burgers, and raw tacos aren't exactly mainstream. But Rebel Cheese – the only vegan cheese shop in Texas, and boasting the largest selection of dairy-free cheeses in the South – is bringing a little culture to the vegan scene in Austin.

The centerpiece of the new shop, just down the block from Kerbey Lane Mueller in the Texas Mutual building, is the deli case, which contains more than their signature wheels and blocks of cheese: They also feature house-made vegan deli meats like salami and bacon.

When owners Kirsten Maitland and and Fred Zwar set out to make vegan cheese, they wanted to create something better than what was currently peppering grocery store shelves – think Daiya and Follow Your Heart, which, as even vegans will tell you, don't actually taste a lot like cheese. "I appreciate that we have those options, it just wasn't for me," Maitland says. So she started experimenting with cashews and cultures. And the result was surprisingly palatable. "I thought, 'We will survive after all!'"

Even more so, they are thriving on hand-crafted, cultured, aged-in-a-cheese-cave cheese. Cheese that was the product of collaborations with chefs and fermenters and dairy cheese makers. "That's been very helpful in taking these recipes to the next level," Maitland says.

That, and they are made with the simplest ingredients: nuts and cultures and a few herbs or spices, vegan yogurt, or oil. The results include creamy havarti, soft chèvre, flavorful Camembert, and Zwar's favorite, Cotswold garlic chive that he says is as quirky as Austin. They are soft, semi-hard, and aged rind cheeses that pair perfectly with crackers, crumble on salad, and are mouthwateringly delicious right off the cheese board (which you can put together at the shop).

But dairy-free cheese wasn't always what life was about for Maitland and Zwar.

Maitland credits the book How Not to Die by Dr. Michael Greger for her decision to ditch her favorite food group. "There was some scary stuff about dairy. So I gave it up overnight," she said. Which was hard, because even when she was a vegetarian, she ate cheese on a daily basis, at practically every meal. But her cholesterol went down (there's none in dairy-free cheese), and she was happy to remove animal products from her diet and reduce her environmental footprint because of it.

It's not only Rebel Cheese products filling the deli case; it's Vtopia from Portland, River­del from New York City, and other artisan vegan cheese from across the country. Zwar says, "Rebel Cheese is the brand. That's not the important thing. The important thing is that we're showing people another choice."

And because there are so many choices, and because Maitland and Zwar want customers – especially non-vegans – to experience them all, they dole out samples like an ice cream shop so everyone can find their favorite. There's also a whole wall of all-vegan wines and another lined with gourmet grocery items like fig jam, dark chocolate, dried fruit, local coffee, vegan honey, spreads, nuts, and crackers – everything you would need for a picnic in the park, a romantic date night, or a book club spread. Because that stigma about veganism being uncultured? "We are trying to change that," says Zwar.

In addition to the 30-40 unique and gourmet cheeses that you won't find in any supermarket (save for a few, perhaps, at all-vegan Rabbit Food Grocery), the shop also has a full menu: sandwiches like house favorite bacon and brie; the Rockstar Bagel with herbed cream cheese, marinated tomato lox, and capers; bleu cheese-topped Cobb salad; soup; or an organic Prosecco.

Not vegan? That hardly matters. The lactose intolerant, health conscious, or merely curious are practically dared to see how good vegan cheese – all grown up – can be.

"Taste and see," Maitland says with a smile.