Six Local Books for Foodies for the Holidays

Texas food for the eyes and stomach 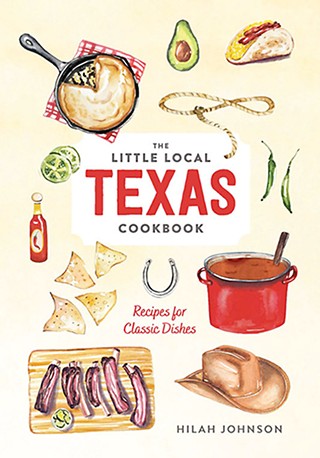 
Here's the charming Ms. Johnson of the Hilah Cooking web series, with her third cuisine-based book. This one's a down-home treasure of Tex-Mex and other Lone Star vittles, filled with recipes for queso, nachos, Frito pie, smoked brisket, chicken-fried steak, kolaches, Texas sheet cake, peach cobbler, and much more. So easy to follow, and with beautiful, full-color illustrations by Courtney Jentzen, this book'll have you deep in the tastiest part of Texas in no time flat.


Locals know that the food at Franklin Barbecue is equal to the (admittedly ridiculous) amount of hype the place is subject to. But A-game Franklin's already shared his brisket techniques in a previous book, and this latest one (also written with his pal Mackay and featuring sizzling photos by Wyatt McSpadden) focuses on beefsteak, telling you everything you'd want to know (and then some) about turning a cow into something perfectly cooked and delicious.


Here's the man who shot the unforgettable images for those Franklin books noted above, following up his own Texas BBQ debut with a coffeetable-worthy sequel that proves he's unmatched as a doc-'cue-mentarian. McSpadden's second volume puts you back in the middle of the best Texas barbecue action, with sights so vivid you can almost sense the sounds and smells that accompany them. 
Oops, Emily Wallace is from North Carolina! But (hear us out) this delightful book was published by UT Press – and if UT ain't local, then Longhorns can fly and we're all in big trouble. Besides, this "Illustrated Companion to Dining and Driving in the American South" does have parts about Texas, and there can't be many travelogues-of-odd-vernacular this engagingly written, can there? Certainly none (other than Road Sides itself) authored by a woman with a master's degree in folklore, an author whose thorough and engaging descriptions of Southern regional standouts and culinary peculiarities are enhanced by her own full-color drawings.


This, we reckon, is as local as it gets. It's a self-published, perfect-bound chapbook – full title: Seven Drinks (on the Absurdity of Being Human) and Instructions for Their Service – in which longtime Volstead Lounge bartender Harvey conjures up a septet of drinks-based rituals that are designed to make you slow down and think about what the hell you're doing – with your drinking, with your basic social interactions, with (really) your life. Is this one of those weird little Austin things? Maybe. Is it of universal human relevance? That's certain.


Just a little nonlocal lagniappe at the end of your bookish meal, here. Just a reminder that this treatment of the subject does for ramen what Aaron Franklin's first book did for brisket. And, yes, Let's Make Ramen! is not just illustrated, it's presented in full-on sequential-art style – with the charm and precision of Becan's visuals matching the clarity and depth of Amano's writing, and the whole thing empowering even the newest cook to, ah, use the ol' noodle in the tastiest ways.