How to grow from a brew to a brand

Anyone can manufacture a brewery brand these days. Just put a mucky spin on an old normcore IPA homebrew and package it in a contemporary stovepipe can that opens 360 degrees at the top. Put a cornhole board on a patch of dirt in the courtyard and host a Tuesday euchre tournament for any displaced Midwesterners that are willing to drain your inventory of that Busch Lite rice lager clone. Set up a merch wall with post-ironic yacht rock rope hats and tri-blend hoodies that make the skin absolutely sing. Package it all up in a script logo that utilizes a plus sign instead of an ampersand to marry two unrelated ideas together, like "Antler + Oil," and you've got yourself a sparkling half-carat brewery starter kit.

In this expeditiously exploding craft beer market, having business gadgets is helpful, but it only allows for enough energy to persuade people to give your brewery a chance ... and not necessarily become outright A+O loyalists. For that, a brewery needs two legitimizing qualifiers: great beer and a genuine personality.

The "great beer" aspect is self-emblematic, of course. But how does a brewery integrate a personality with actual, organic appeal to an oversaturated audience that doesn't sound like it came straight from a brewery-name generator, which is precisely how future icons of the Croquembouche Par­fait Gratzer – "Antler + Oil" – was conceived? 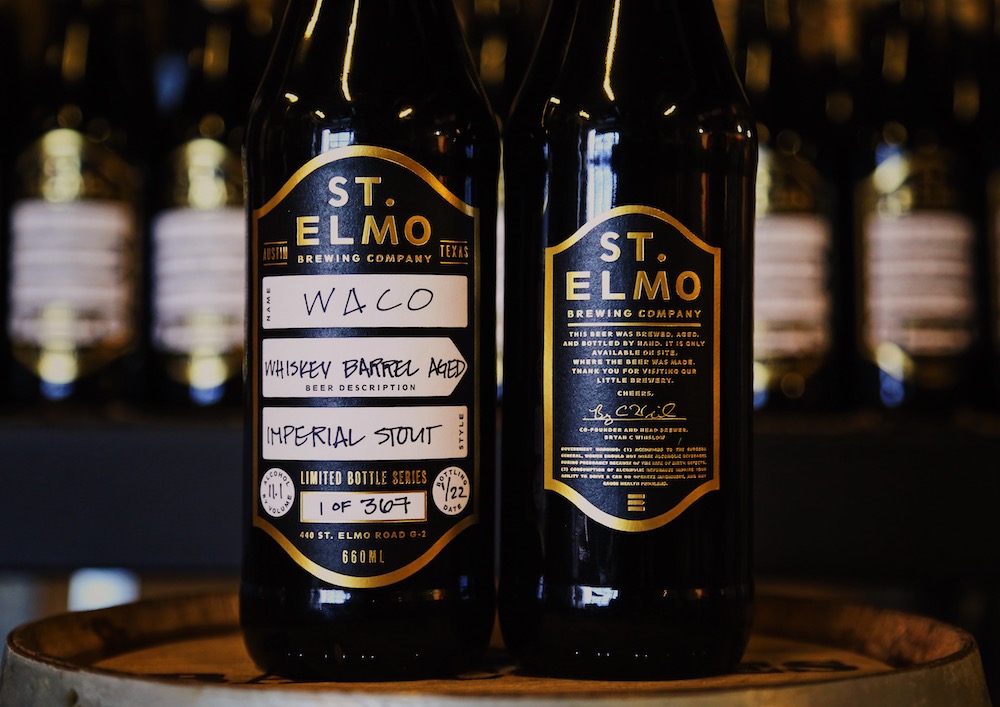 Christian Helms is the founder and creative director at Helms Workshop, an Austin brand agency that helped visually build industry big-timers like Modern Times in San Diego, Boulevard Brewing in Kansas City, New Belgium in Fort Collins, and local cornerstone breweries Pinthouse Pizza and Austin Beerworks. Helms explains that a beer's packaging should be the motivation for interest in a beer.

"[Packaging] should create curiosity and drive trial," Helms explains. "At its best [the design] might create an aspirational moment where the consumer's gut takes over – a moment of aspiration and desire to take part in the brand."

After all, scrutinizing the vast assortment of beer choices for the evening awash in supermarket beer fridge glow or staring down the opposition on the tap wall, consumers tend to drink with their eyes first. The sleeker the design or the catchier the label, stylish branding affirms the bias of our reflective coolness and confidence, helping guide personal decisions as to what labels we want to be associated with at the tailgate or the bar.

"The packaging becomes a beacon for folks to associate with all of the flavors, ideas, and experiences they associate with the brewery," says Helms. He hypothesizes that when a beer delivers on the promise made by the packaging, the dots start to connect for the consumer. "Does the branding and packaging help to amplify the beer? Wholeheartedly, yes. I'm a big believer in experiential living – the idea that a meal tastes better in an inspiring environment, music is more meaningful in the right company, and a beer is even tastier out of a thoughtfully designed package."

"Aesthetics paint the way breweries approach their own beer and it shows the consumer that they value their product on multiple levels," posits Keith Davis Young, independent designer and art director responsible for local beer brands like St. Elmo, Central District, Barrow Brewing, and part of the successful rebranding of Independence Brewery. "It shows everyone how much a certain brewery values their product and how much they are willing to invest in their brand. [It seems] the breweries that value design on that level are the ones really excelling in the market."

“I would taste it and think, man, what a disservice to not have the marriage of a visual identity with an incredibly tasting beer. They’re really selling themselves short when they do that.” – Keith Davis Young, independent designer and art director

"Well, there's also the saying 'Don't judge a book by its cover,'" says Chicago-based Jessica Deahl, lead designer at Blue Owl Brewing (which is slowly transitioning their brewery art to an in-house talent) and co-author, illustrator, and designer of the beer book Trappist Beer Travels. "But [we] know that's definitely not how it actually works with consumers. Consumer packaged goods designers are always thinking about how this product will look on the shelf. Does it represents the brand? Does it stand out from competitors while also hitting the right tone? Hopefully the sensory experience backs up the visual experience, and vice versa."

For Blue Owl, their ethereal can design that includes delicate patterns and weightless font on a blanched backdrop is a fundamental visual cue for customers who need to be prompted for a bright-bodied, soured ale experience. It gives the consumer a sense of control over a tart and tangy drink that is technically wild with bacteria, so instead of a gustatory balance from bitter hops and bready malts, it comes from a symmetry of soft design and acidic flavor.

Young recalls walking around the Great American Beer Festival in Denver last year being stunned to see plenty of the country's craft brewers ignoring the advantage of thoughtful graphic design that complemented the quality of the brewery's beer. "At least 75 to 80 percent of them were just terrible with branding. The beer was incredible, but I would have just passed their booths unless someone pointed it out to me, like, 'You gotta try their beer.' I would taste it and think, man, what a disservice to not have the marriage of a visual identity with an incredibly tasty beer. They're really selling themselves short when they do that."

"With St. Elmo, for example, we were trying to convey really fresh beer made simply," Young notes with a blaring caveat that the implication of simplicity in St. Elmo's beers is not to suggest that their brewing process itself is simple. In fact, making things look easy is actually pretty difficult, particularly with brewing notoriously unforgiving pale lagers, at which St. Elmo excels.

"Consumers see so many things that are so overdone, and we even see that in the way a beer tastes sometimes with all these big crazy flavors, but that's what's so refreshing about St. Elmo's beers. They're really clean and palatable and I wanted to give their labeling the same kind of format. The vibe in there is stripped down, simple, and to the point. They are very meticulous about how they get to the final product but they don't oversell it. Utilitarian in a way," offers Young.

In redesigning one of Austin's oldest breweries in Independence, Young contends that, while the brand was iconic, it wasn't cohesive with the varying styles of design composition between each beer. "[The design team] needed to tie it all together, but also needed something that stood out beyond that. When we were looking at the shelves, everyone was going for these bright, colorful cans, which is appealing in its own way, but we cut through all that with distinction."

That distinction was a jump with abandon into brand-new, murdered-out, matte black cans that better represented the brewery's garage rock legacy. "They always felt like they were the black sheep of Austin's beer scene," Young recalls. If nothing else, the move is successful for reinvigorating the brand (the company reports record sales numbers) from an outdated early Aughts motif that somehow also suggested the beer inside might be as stale as the packaging. And while Independence has always made reliable, timeless mainstay beers, the new scheme suggests full-bodied ales and lagers with a dark streak for heavy experimentation. Hey, some people want unfluctuating Dave Matthews Band in their beer, while others angle for a more creative evolution, like a Radiohead or Sturgill Simpson.

"No brand package could ever tell that entire story. A can or bottle can't fully describe the flavor and aroma of the beer, the culture and values of the brewery – nor should it," urges Helms. "We only have a split second on the shelf to grab attention, [but] I love when folks say that the branding is as endearing, fun, and unique as the brewery's ethos as a whole. That's exactly what it's distilled from."

"Our relationship with Helms is basically him taking our OK ideas and turning them into great ideas," credits Michael Graham, one of four co-founders of Austin Beerworks. "He's gifted at figuring out why something is special, making it more special, and then conveying it all through design. He's equal parts artist, psychologist, and salesman."

Perhaps that is to say selling craft brew visually just might be the pretzel in beer logic: You don't choose the brand so much as it chooses you. If it looks great, then surely it tastes great too.

"With all the competing breweries out there, compelling design is more important than ever," concludes Graham. "It needs to get someone's attention then convince them that the beer inside is worth trying. But, it can't be a false promise. Good design can make a new customer, but good beer will make a return customer."

A version of this article appeared in print on October 18, 2019 with the headline: A Picture of Beer