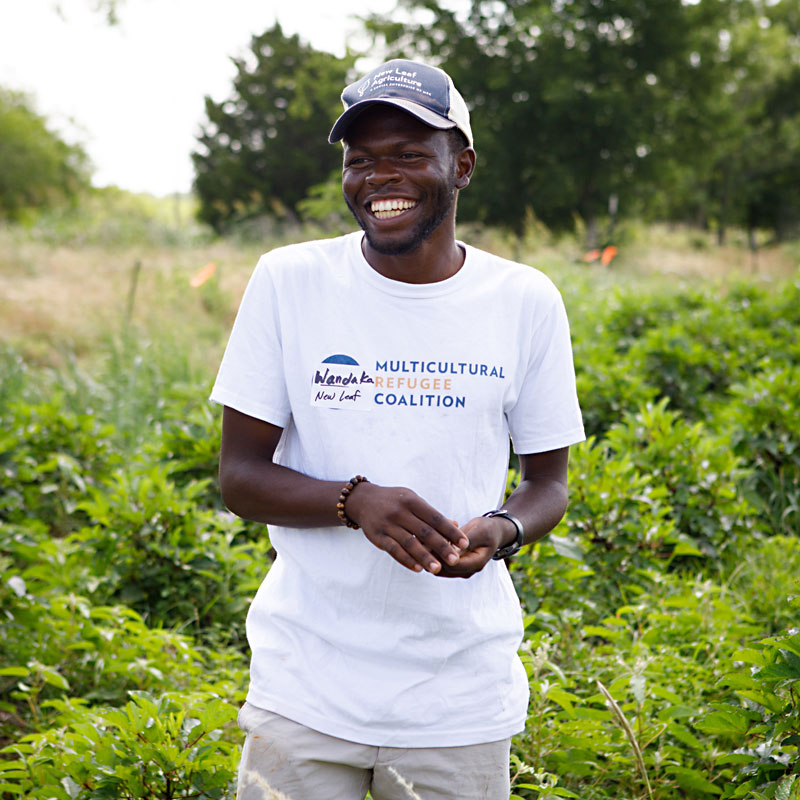 Conservationist Jon Beall has seen plenty of activity on his 315 acres of blackland prairie over the years, but one day he encountered something different on Three Creeks Farm.

"There were about 20 young people gleaning potatoes," he remembers. "They were taking what was left, what farmers aren't going to harvest because it's too labor-intensive. I said, 'Who are these people? Where did they come from? What are they doing?'"

This historic farmland in the freedmen's town of Littig, Texas – a small, eastern Travis County community established in 1883, about 18 miles northeast of the capital – was originally owned by Jackson Morrow, a former slave and the first African American postmaster in Texas. His niece inherited the land and sold it in 1978 to Beall, who purchased it with a loan from the Texas Veterans Land Loan Program after serving as a marine in the Vietnam War.

Beall found out that the gleaners were a part of New Leaf Agriculture, a branch of the nonprofit Multicultural Refugee Coalition (MRC), which connects refugees to sustainable farming opportunities by operating 40 community garden plots around Austin.

"One thing led to another," says Beall. "I found out they had turned the Lanier High School garden into a lush, productive community garden. But they had bigger dreams and we've got 315 acres out here – that's a lot. Why not put it to use, do something productive? We have been basically a perfect fit. We are lucky to have found each other."

In early 2018, Beall allotted 12 acres for New Leaf Agriculture to begin developing, which they did with Earth Repair Corps, who guided them in creating a master permaculture plan to manage water flow, conserve human energy, limit waste, and use renewable resources.

"We really looked at the contour of the land and studied where the water was flowing and where it was going to pool," said MRC CEO and co-founder Meg Erskine. "We did soil surveys and tried to understand where the best soil was to grow."

Erskine, who has a background in ecology, evolution, and conservation biology, worked as a bat biologist with Texas Parks & Wildlife for 10 years before starting the Multicultural Refugee Coalition in 2009 with two Liberian refugees and another American.

"I started teaching ESL to the refugee community, and what I heard was a desire for self-sufficiency, just being able to truly take care of yourself," says Erskine. "They were in a state that was quite vulnerable; [they] left everything behind, and when they get here, everything is given to them. And one of the big wishes was, 'I want to get my hands in the dirt.' They get four months of federal support as refugees, and they're resettled in apartment complexes and don't have a lot of connection to places to farm or even garden, really. So we started connecting them with local community gardens."

In 2011, Erskine launched the New Leaf Agriculture program, starting with a community garden at Lanier High School led by Congolese refugee Wandaka Musongera, who now serves as farm manager for the organization.

“Growing food is part of the culture for some people, especially [those of] us who come from Africa. You are born and raised growing stuff.” – Wandaka Musongera

"Growing food is part of the culture for some people, especially [those of] us who come from Africa. You are born and raised growing stuff," says Musongera. "My family are traditional farmers. I was born in the Congo, and everything we ate, we grew ourselves."

After running the program successfully at the community level, Erskine says the organization started seeking out commercial farmland in order to provide livelihood opportunities for refugees with farming skills. Now they can choose to be paid for their work on the farm while receiving on-the-job training, and those with an entrepreneurial drive have the opportunity to cultivate their own plot of land. Each Saturday, New Leaf sells their produce at the SFC Farmers' Market Downtown, and they have been seeing a growing interest from local chefs who are drawn to the unique varieties of produce they cultivate, including greens like Hon Tsai Tai, roselle, amaranth, and squash greens.

"I'm really proud of that, because it's not a top-down organization where we're doing random job development, preparing people for a hotel job or something like that; usually, for low-English-speaking folks, that's where most of their jobs go," says Erskine. "We don't feel like there's a lot of upward mobility opportunities there – and certainly not using their unique skills. But we have plenty of space here to develop out and provide them with a plot for their autonomous growing."

Last year, the first crops to be planted at Three Creeks Farm were several varieties of heirloom corn for James Brown at Barton Springs Mill, and this year they've been growing bush beans for the mill. The third partnership is with Miranda Bennett Studio, a local designer of plant-dyed clothing. Open Arms Studio, another branch of MRC that provides sewing training and living-wage work for refugees, produces Miranda Bennett's clothes, and New Leaf Agriculture grows a variety of plants used to make her dye, including Mexican marigold, madder, weld, pomegranate, Hopi sunflower, and cosmos flowers.

Though the first growing season was spearheaded under Musongera's leadership by just a few farmers, New Leaf Agriculture looks forward to expanding their crop production along with their workforce to grow more plants traditionally eaten by refugee communities, including cassava and African varieties of eggplant. They're also hoping to bring in animals to graze on the cover crops of buckwheat and cowpeas that they're planting in the off-season.

New Leaf Agriculture is currently consulting with Farmshare, an Austin nonprofit dedicated to promoting a healthy food system through farmer training, increased food access, and farmland preservation. Their education manager, Michelle Akin­diya, is helping them develop an ESL-based program to educate farmers from an array of countries, from Bhutan and Burma to Iraq and Venezuela.

Though interpreters are available as needed through MRC's Shared Voices program, which trains refugees as professional interpreters, Akindiya says some of the best learning happens in the field, and utilizing visuals is key.

"I find that there's this interesting balance between respecting the tools and the skills that they bring with them – so many of them have grown their entire lives – and then tweaking some of the systems so there can be a little more efficiency," she says. "Because they have amazing skills and amazing techniques that I think they could teach [to] a lot of other Central Texas farmers."

On Wednesday, Oct. 16, the Multicultural Refu­gee Coalition will celebrate 10 years of creating livelihood opportunities for refugees with a party at Mercury Hall. And New Leaf Agriculture’s Fall CSA just launched. In exchange for produce shares, members who invest in the farm provide funding for farmers to prepare beds and buy seeds and transplants. More info at www.mrcaustin.org.