Crawl before you ball 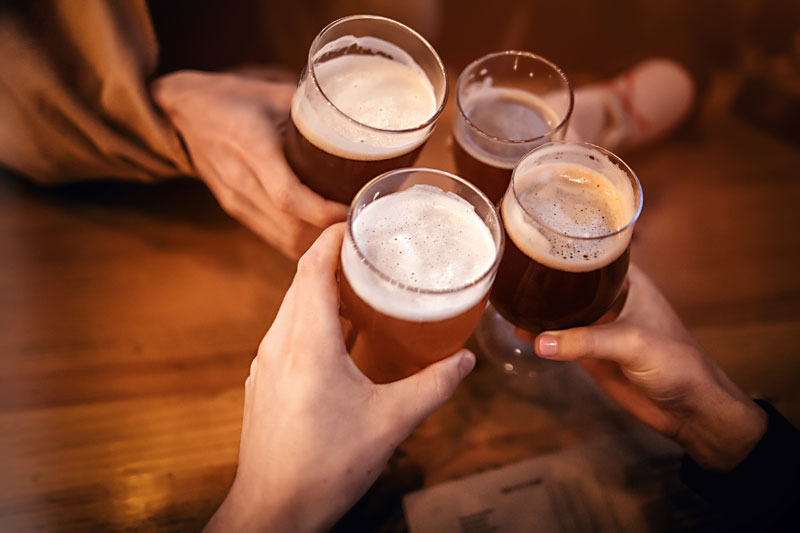 Initially we set off to write the quintessential New York Times-style 36-hour beer crawl of Austin, but quickly realized that would be depriving you, local drinkers and beer snobs from afar, of essential information on how to properly guzzle through a town that is positively horny for craft beer. Instead, we decided that a "choose-your-own beercation" would be much more consistent with the culture of Austin's elite boozebags (not us). You, too, can choose one of these beer crawls auditing the town's thermonuclear taproom and beer bar scene. Or hell, buy yourself a two-bedroom American Craftsman tent Downtown and choose 'em all. Everyone else is doing it.

When it comes to beercationing, the last thing you want to do after deboarding is de-boozing. That's why Live Oak Brewing did every one of Austin's 3 trillion weekend bachelor/ette partygoers a solid by moving to a spot adjacent to the airport so that you can keep that first-class lager buzz going before treating this town like a toilet.

Don't sleep on Live Oak's HefeWeizen or any of their weekly pilsner varietals. Next, it's over to Hi Sign for an Austin beer staple, Hi-C IPA, while the pilots on the 2:20 out of Kansas City look upon your refined taste from, like, 12 feet above Hi Sign's beer garden. Next, aim that Uber at Independ­ence Brewing, one of Austin's most dialed-in breweries when it comes to knowing what locals want: a reason to shit on Oklahoma with the aptly named Oklahoma Suks amber.

A six-minute adventure through the most boring part of town will get you over to the St. Elmo District, a slightly less ordinary backlot of gray warehouses in an ocean of asphalt, but which surprisingly hosts two magnificent breweries in the widely underrated Skull Mechanix Brewing (workmanlike styles in one of the more pleasant taprooms in town); and creativity overlords St. Elmo Brewing, whose endless parade of clever beers is a steady rotation of magnificence completed by fancy wings from food truck maestros Soursop. Finish up the night at rising stars Nomadic Beerworks, a brewery with limited taps but unlimited potential.

While some of our perfectly researched beer routes have nothing more to do with each other than getting ripped within a reasonable geographic proximity (more time for beer!), this crawl has a very specific theme: food tusslin'!

First up is the Austin Beer Garden Brew­ing Company, which locals refer to as the Belichick Patriots of the Austin beer scene (they don't), having been thrice crowned (and currently defending) champs of all LARGE brewpubs throughout the land. What makes it so special? Their trio of gold-­medal-winning pilsners (usually) on tap – Velvet Revolution, Rocket 100, and Indus­try – and a menu of beer soppin' pizza pies.

Just a jaunt down the hill on South Lamar is Uncle Billy's, a beer and barbecue joint solidly back on its horse following a QC hiatus not long after the ABGB folks left it to go start their own hot spot. Next, it's off to partly amusing, partly kidney-stone-passing entertainment district Rainey Street to visit its duo of beer bars: Craft Pride, which promotes a Texas-only beer scene to the tune of 54 taps and full cooperation of Via 313's deliriously tasty Detroit-style pizzas out back. Banger's, meanwhile, existing only six broken Lime scooters away from Craft Pride, slings 30 varieties of house-made sausages and 202 beers on the wall. Someone should make a song about that. Anyway, we recommend getting one of our local prizefighters like Pinthouse Pizza's Electric Jellyfish or any IPA from Southern Heights at either of these spots, since those are in brewery crawl deserts.

Then whisk away to Blue Owl Brewing on Austin's Eastside – they're fully committed to kettle sour ales that'll churn all that grub like a digestif – before making way into the Brewer's Table for top-shelf, small-batch lagers (Vor Ort is life) that merely co-headlines with the best brewery-led food program in the entire city. No, galaxy.

This is Austin's most urban crawl, and the list of reasons Austin is awful for walkable brewery tours is long and distinguished – but most notably because wholesalers love to playfully spank politicians with stacks of hundos and also the price of Downtown real estate is downright loony. Anyway, this bit of brewery row can somewhat approximate a more established beer town in the U.S., which, in Austin, starts at the end of East Sixth at Hops & Grain Brewing where you can drink 10 cauldrons of their refreshing Zoe Pale Lager, getting you suitably energized for an impending battering ram into the heart of Austin.

Make your way to Lazarus, a taco paradise that happens to brew a litany of experimental bangers, but also the perfect pilsner in Prodigal Pils. Then, it's over to Zilker Brewing where one must mainline their entire list of IPAs, juicy and regular strength, before moving onto their inimitable Coffee Milk Stout. That's right, we said inimitable. After licking your pint clean, head over to Wright Bros. Brew & Brew for a choice off the local tap wall and also a handsomely made cortado by a probably handsome Austinite. Take this newfound caffeinated momentum Downtown to Rated Rookies Central District Brewing, where you can get in on the ground floor of hyping this brewery from the start.

Yes, the "A,A,A" call went from wired McConaughey catchphrase to tired Austin trope, but hey, it's back again as a semi-awkward chantable thanks to Matt McC's involvement as part-owner of Austin's imminent professional soccer club inexorably named Austin FC. They're even making a big-ass building and have uniforms and everything! And part of the reason they plopped this sports hut right in the North is because the area serves as the Austin's truest "brewery row," bringing only the most rousing, noisiest, flatulent fans to a part of town where they can get the drunkest.

Circle is the most natural entry point right off the Red Line train and probably with the only hopes of parking. Hopsquad (opening soon), Austin's youngest brewery with a cerveza bent, is next on the route. Then there's 4th Tap (OMG strong beers!), Oskar Blues (familiar beers for the less adventurous), Celis (with a Belgian as famous as Eden Hazard or Van Damme!), and Adelbert's (barrel-aged boppers) ringing McKalla Place like a FIFA-headquarters stakeout.

But wait! There's also superpower Austin Beerworks scoring legendary golazos from 67 different micro-varietals of their already spectacular seasonals and core beers. For a late-addition sub, definitely think about bringing recently expanded Fairweather Cider Co. off your bench when doing a cursive walk to the east stands.

Sure, this "crawl" is incredibly ambitious and definitely best done with a fleet of free rideshare credits, but maybe cruising at 50 mph in the backseat of a Hyundai Sonata through a forest of low brush is your fetish. Besides, one can't truly appreciate the beer scene in Austin without taking in its surrounding Hill Country breweries. That's facts. If you're party for this 45-minute challenge of farmhouses, lake views, and a possible celeb sighting (but not that celeb!), then saddle up those Lyfts and head on over to Vista Brewing in Driftwood to start the day with traditional European-style beers (saisons! kölsches! lambics!) under their legion of live oaks.

Afterward, head north toward sour savants Jester King, who continue to stand pat on the title of Austin's Most Famous Brewery, and deservedly so, as they continue to milk every fruit imaginable in a way that makes beer idiots across the land get FOMO anxiety about JK's wild fermented ales. Do a pivot to see the dudes over at Last Stand Brewing, who have quietly made some of the best SMaSH (Single Malt and Single Hop) IPAs in Texas over the past few years and host a charming taproom/biergarten with similarly rad neighbors (Revolution Spirits and Argus Cidery).

After that mini block party, it's over to Family Business Beer Company, who boasts as owner the undisputed second-best celebrity in Austin and person with the most locally Googled name for people over 30, Jensen Ackles. Then, if you're up for a scenic drive to dinner and a well-crafted, low-ABV session ale overlooking a bunch of rich asses on Lake Travis, get to Oasis Texas Brewing Company, which has utterly perfect views of people with bodies you would undoubtedly have ... if only you'd quit drinking so much beer. Safe travels.

A version of this article appeared in print on October 4, 2019 with the headline: Crawl Before You Ball