The First Rule of Dinner Club Is ... Well, Let’s Talk About It

Austin’s array of subscription-based nomfests will please your palate, expand your experience, and maybe even comfort your budget 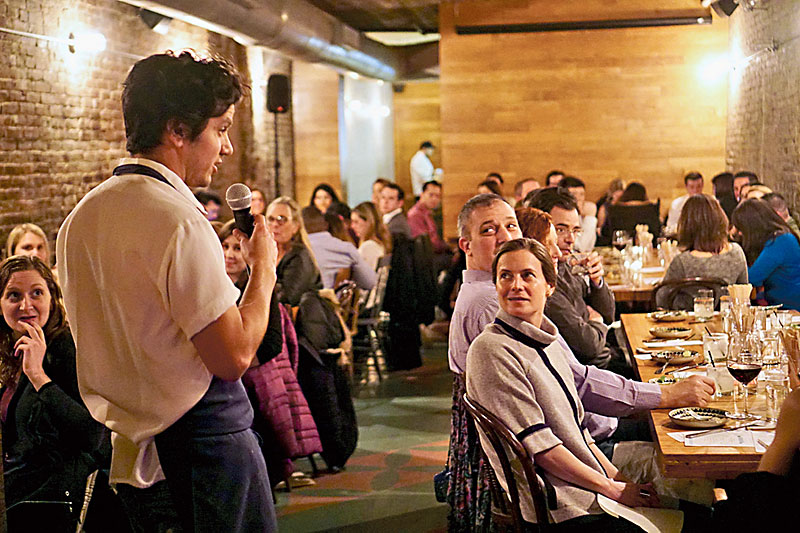 Put your money where your mouth is.

Clever old metaphor, that. Nicely alliterative, meaning "back up your words with something more substantial."

When you go out to eat somewhere, you're more literally putting your money where your mouth is. Dining out can be expensive – and let's hope that statement is no surprise to anyone outside the credit-­cosseted One Percent. But it's also true that good work and expertise and materials can be expensive; and that thing that Grandpa always said, "You get what you pay for," is often equally spot-on; and so if you want a meal to happily remember, a gustatory event that you could actually call Fine Dining and not feel silly about it, you're going to have to unmiser yourself and start shelling out the simoleons.

Everything else being equal, the fewer the simoleons, the better, we'd reckon. This is where dinner clubs come in.

Dinner clubs: You pay an annual membership fee; you get discounted dinners at fancy places; eventually your discount savings can surpass what you paid to join.

Dinner clubs: You pay an annual membership fee; you get discounted dinners at fancy places; eventually, your discount savings can surpass what you paid to join. This is the perfect choice for people who are going to dine out in top-notch eateries anyway, who prefer to treat themselves to culinary experiences beyond the humdrum, but whose bank accounts aren't at, say, Scrooge McDuck level.

Austin's got some dinner clubs. Even though Dinner Lab – which we fairly raved about a few years ago – has gone the way of the dodo, this city does have some dinner clubs. We're going to look at two examples – because we've recently had the pleasure, and because their styles dovetail perfectly – and make note of a few others for you.

Taster's Table is a homegrown club that's what you might call classically structured. They have however many dozens and dozens of members; they arrange to bring their members to some fine venue on one of the less busy nights – Tuesday, for instance – and everybody gets served from the usual menu but pays a substantially lower price than usual. So the members are happy for the great food and savings, the restaurant owners are happy for the greater sales on a slow night (and the chance to get newcomers addicted to their particular style of noms and ambience), and the honchos of the service have fulfilled their ongoing duty to their subscribers.

Taster's Table's honchos are Max Kunik and Matt Wolski, two young St. Edward's grads. During a recent Taster's Table event at Intero on East Cesar Chavez, we asked Kunik how they got started in this endeavor.

"I've always been around food," Kunik told us, "but never been in food. I worked for Austin Food & Wine Alliance for Austin Restaurant Week. And I saw all these food bloggers getting these terrific meals for free, and I wanted to provide something of the same experience for the general public. So Matt and I were going out to dinner and asking the server what the best six courses were, to just bring them and surprise us. And with that, we came up with Taster's Table. Matt runs a digital marketing agency and my background's in event planning, so I do the event side and he does the digital side, and that's how we started in August of 2015. It's still just a part-time gig. We'd like to make it a full-time gig, but for now it's more of a hobby – but it does pay for all of my eating out."

"We just launched in Portland and Houston, too," continued Kunik. "We don't really feel competition between the different supper clubs because they all do great things. Taster's Table is getting restaurants to do what they do every day, not coming up with special dishes for us. Our whole goal is to allow folks to be able to afford to try local restaurants, and then the idea is they'll come back to the ones they really like."

Kunik said this, mind you, at a gathering that featured dishes from three high-profile chefs who'd flown in from Canada, in addition to the special courses served up by Intero chef Ian Thurwachter and pastry chef Krystal Craig. So that was a bit unusual for the club. But that sort of thing (except for not flying in talented meat-mongering Canadians, yeah) is the whole point of the other club we're highlighting here: Tasting Collective.

"Restaurants that do the same thing every time, never venturing beyond the same menu," said Tasting Collective's Nat Gelb, "they may be authentic, but they're not the format we're looking for. We want to work with chefs who are willing to break outside their day-to-day norm, and that naturally leads us to restaurants that are more forward-thinking and even experimental." Gelb, a former tech entrepreneur who ditched the digital domain for food-forward fomenting, is based in New York City, and his Collective has an outpost there – and in Austin, Chicago, Denver, Nashville, Philadelphia, San Francisco, Seattle, and Washington, D.C. "When I first started the business," said Gelb, "I made the decision that we weren't gonna make any money off the restaurants; it would just be through the subscriptions. And the restaurant industry in New York is brutal – the rents are so high, the competition can be pretty cutthroat – and I figured that if I could make it in New York, I could – like the song goes – make it anywhere." And so he has, rather spectacularly, with this off-the-beaten-menu approach.

"It's not just about eating," Gelb clarified. "It's about connecting with the chefs. It's about giving them an opportunity to do something different, to follow their culinary inspirations beyond the regular menu, and having our members offer feedback on the dishes they've enjoyed. We take over the entire restaurant, everything's served family style, and the chefs come out three times during the meal, talking over our wireless system. The first time, they're telling us about their background and about the initial courses – maybe where they learned the recipe, where they got the inspiration, where the ingredients are sourced. Then they come out again during the main courses, talk about those, and prepare people for what's coming for dessert. And if there are any questions for the chefs at any time during the meal, we put those on Q&A cards and the chef responds to them during the dessert course."

It's a sort of real-time and in-person Yelp situation, we imagine, if Yelp wasn't as weaponized as it is. And sure enough, Gelb's been quoted elsewhere: "We're like the anti-Yelp."

Intero, Launderette, Emmer & Rye, Con­tigo, Holy Roller, Vespaio, Hillside Farmacy, Foreign & Domestic, on and on: Tasting Collective and Taster's Table aren't just messing around – they're in cahoots with some of the best places in town. You might want to look into their impressive offerings, see if either format appeals to you, and supercharge your personal dining agenda here in Austin circa the latter half of 2019. Or, you know, there are other such clubs with somewhat similar setups or variations on the eating-well-and-socializing theme: We've included a sidebar that notes a few likely suspects for your perusal. And in any case – not to shill for Adam Rapoport or anything – we wish you a resounding bon appétit!

1) WANDER/GATHER
Here's a subscription-based club from Jessica Alonso, one that's equally interested in providing opportunities for socializing – "friendship, dating, networking" – and local cultural appreciation, convening for cocktails or art-themed dinners in posh venues and often incorporating live painting and other art demos as part of the night's revelry. Upcoming event: Night of the Living Dead at the Wolf House. www.wander-gather.com.

2) SUPPER FRIENDS
This venue-based concept from Stephen Shallcross' 2 Dine 4 caterers is a series that brings in guest chefs from around Austin and beyond to present, via impeccable service, multicourse wine-and-cocktail-enhanced meals in the Swoop House's elegant 1930s bungalow setting on the Eastside. Recent event: Chefs Brandon Wriser & Kegan Strichko Sushi Dinner. www.fb.com/supperfriends.

3) ONE LONG TABLE
Jeff and Vanessa Darby's dining society frequently eats al fresco, surrounded by gorgeous Texas ranchland and seated at, yes, one long table – just like at the couple's Hill Country wedding in 2015 – where the culinary offerings from top Central Texas chefs are as delicious as they are sophisticated. Upcoming event: Murder Mystery Dinner. www.onelongtable.events.

4) SUPPER CLUB SZN
The only thing to stanch our flow of tears when Deepa Shridhar announced the closing of her Puli-Ra food truck was the knowledge that she'd increase the number of pop-up events featuring her South Indian-inflected feats of culinary wizardry. Sure enough, those events have multiplied like the most welcome of rabbits – most often in conjunction with the Austin Winery. Upcoming event: The venison-forward Revenge: La Flaca Benefit. www.puli-ra.com.

5) ONE NIGHT KITCHEN
This hidden gem of a recurring culinary pop-up – fomented by the affable Ben Coffin and friends, soon to return after relocating operations to the East Austin Culinary Studio – emphasizes "community and storytelling" but doesn't shirk on providing a diversity of creative plates made with locally sourced ingredients. Upcoming event: A series of Family Suppers "looking back at the family dinner table that shaped how we view food." www.onenightkitchen.com.