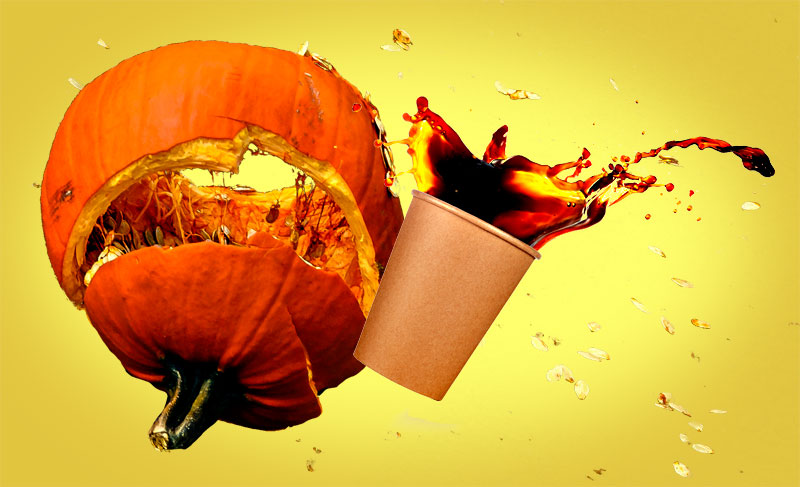 In all of the hullabaloo that surrounded the dawn and demise of the pumpkin spice latte – that erstwhile cultural phenomenon – it seems odd that no one noted the ambiguity of the phrase. What be this mysterious "spice" element? Using powers of deduction, it could be surmised that the spices used in Starbucks' mystery syrup are the spices found in a standard pumpkin pie. Those would include, according to Julia Child, Martha Stewart, and countless other venerated sources, vanilla, cinnamon, ginger, nutmeg, and sometimes clove.

With such a plethora of spices to choose from, there must be some other tried-and-true combinations of milks, spices, and sugars that exist in the autumnal drink scene. Now that the PSL has been played out to its full cultural potential and then some (so much so that Starbucks has replaced it with a new pumpkin drink, the pumpkin cream cold brew), we need alternative spiced drinks, and we need them now. (It's almost November for chrissake.) Find a local joint here that serves sweet and spicy concoctions (in frozen form as well) to make up for our lack of winter weather.

Ah, the old standard. If you're not feeling coffee or hot chocolate, this sweet yet spicy alternative is the go-to. But don't be fooled by its ubiquity; the chai latte is difficult to master. Overly sweet, milky, and watery versions abound, but the Steeping Room teahouse masters the chai latte with three versions: spring buds chai, a light and fresh take with nutmeg and vanilla; chocolate chipotle chai; and classic masala chai. Figure 8, Cenote, Austin Chai Wala, and Pacha do great versions as well. This turmeric and coconut milk blend became a trend among the paleo contingent a while back due to its anti-inflammatory and antioxidant properties, but it has its roots in Indian culture. Original versions of golden milk were more medicinal than artisanal, dissolved in water rather than milk and unsweetened. But since its westernization, sweet takes are ubiquitous in hip food climates like Austin. Picnik's version is a golden milk and matcha latte and includes (like all of their drinks) a base of butter and MCT oil, an oil extracted from coconut oil that helps your body more easily digest fat. Obviously, a butter-based beverage alone is decadently delicious, but the addition of black pepper, ginger, cayenne, cinnamon, cardamom, and maple syrup doesn't hurt. Part of the PSL's appeal is its association with coziness and cool weather, and this drink's maple and butter flavors give it the same comforting feel. Other great versions of golden milk can be found at plant-based food truck Curcuma (whose name is derived from the principal chemical in turmeric) and Caffé Medici.

Cultivated in China as early as the Tang dynasty, matcha is basically green tea leaves distilled into an extra strong powder. It's made from tea leaves grown in the shade (to make them extra sweet, green, and caffeinated) that are finely ground into a powder that can be blended with any sort of milk you choose. It's high in antioxidants, better for you than coffee, and has a more sober, mature flavor than other spiced drinks (perhaps because it's not technically a spice). Zhi Tea (they do a whole traditional service), Sa-Tén, and JuiceLand offer balanced not-too-sweet and not-too-milky versions, while the Steeping Room offers a refreshing smoothie version blended with banana called the Matcha Freeze.

This Mexican coffee drink is sweeter than a cold brew but not as saccharine as a frappé. It is traditionally blended in a clay pot to enhance the flavor, with cinnamon, piloncillo (an unrefined cane sugar), cloves, and sometimes other spices. Women who served in the Mexican Revolution, known as soldaderas or adelitas, often prepared café de olla for soldiers in addition to fighting; it was even rumored to be Emiliano Zapata's favorite drink. Mi Madre's does a great job, as do Dai Due Taqueria, Licha's Cantina, and Joe's Bakery & Coffee Shop.

The decadence of a well-done Mayan hot chocolate puts any PSL to shame, maybe because this drink is descended from the very first hot chocolate, xocolatl, made by the Olmec, the earliest known civilization in Mesoamerica. Cacao nibs were ground into a paste and mixed with hot water rather than milk, resulting in a decidedly unsweet and bracing concoction – a far cry from the creamy sweet kid's drink we think of now. Modern versions are a little more forgiving on the palate, and mostly include milk and a mélange of spices, chiles, or cayenne as the base. The simplest Abuelita-style Mexican hot chocolate is just cinnamon and cocoa, but it gets the job done. (Pacha and Halcyon will fix you up.) However, nationally recognized food truck Holy Cacao is not playing around when it comes to hot chocolate, serving up not so much a drink as just straight-up melted chocolate. They can make it frozen, too, because unfortunately we have to be realistic here in Central Texas.