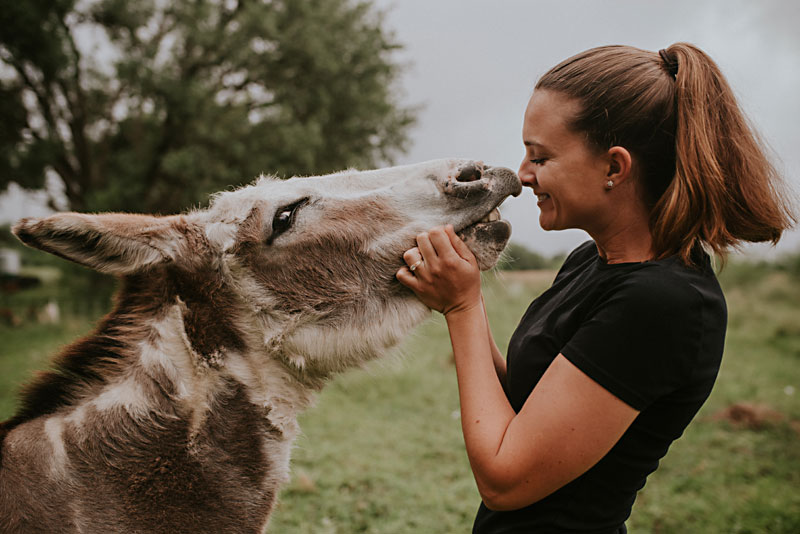 While Silicon Hills is booming, another career path has gained traction: A number of young professionals in Central Texas have left their corporate careers, seeking work with more integrity and purpose. And now they've found their calling as farmers and land stewards, using multiple skill sets to produce responsibly grown food products and to help educate the community on why it matters.

Catherine and Tanner Klemcke entered the corporate world after college; Tanner worked in the oil industry, and Catherine worked in pharmaceutical sales. It was when they watched Food, Inc. – a documentary revealing the truth about factory farming in the U.S. – that their lives, and eventually their careers, changed drastically. Tanner said, "We started educating ourselves on how meat is raised in America. We were shocked. We started researching all the regulations and realized it was all true."

They bought an abandoned farmhouse near Victoria to create a country lifestyle and decided to try raising their own meat. Catherine said, "We didn't want to stop eating meat, we just wanted to be more conscious of how we were eating meat." And then they realized, "If we're going to do it for ourselves, we may as well do it for the community and have more of an impact. We can use our land to make a change – for the environment, for our health, and for the animals' health."

Three years ago, they brought home a cow, two pigs, and 50 chickens, but without an agricultural background, their farm in Meyersville (about two hours south of Austin) started as an experiment. Tanner said, "We put them in a pasture, fed them the right stuff, and decided to see how the meat would turn out."

The outcome was so impressive that this year they've raised 22 cows, 36 pigs, and 1,700 chickens. Their full-time collaboration, 1915 Farm, is now shipping dry-aged grass-fed beef, pasture-raised chicken, and pastured heritage pork nationwide. They offer a Grassroots Club, with bundles delivered to doorsteps and catered to the subscriber's cooking style. The "Classics" bundle features about 15 pounds of various cuts of meat ideal for simple weeknight-style meals, like chicken breasts, various sausages, and country-style ribs; the "For the Foodie" option features slightly more elevated cuts like osso bucco and flat iron steak.

“There’s something amazing about making your business purpose-driven rather than profit-driven.” – Catherine Klemcke, 1915 Farm

"It's just so rewarding to see how happy the animals are and how they get to thrive in their natural environment. There's such a strong correlation with the quality of the meat and how it's raised," said Tanner. "I would like to think it's made us more compassionate people, really having the chance to understand the value of an animal's life."

"There's something amazing about making your business purpose-driven rather than profit-driven," added Catherine. "We've worked more hours than we ever have before but it's just so much more rewarding so it doesn't feel like work."

Another local couple who decided to start from scratch and try their hands at the agricultural sector, Sam and Carolynn Moffett worked for over a decade in digital advertising where they met, before acquiring Shirttail Creek Farm in Brenham (east of Austin, about halfway to Houston). "We had been talking for years about wanting to leave all that to start a farm. We wanted to do it while the kids were still young," said Sam. "We went to Callahan's just to show the kids the goats and chickens, and we realized we were ready to go all-in."

Within a few weeks of their revelation, they found the 150-year-old farm and moved into the original house on the property. "All of our family and friends thought we were totally out of our minds," said Sam. 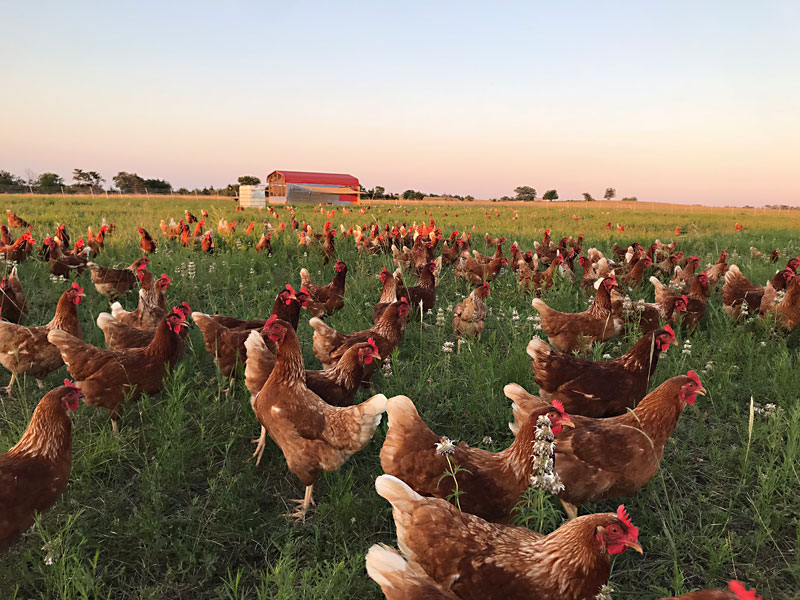 The Moffetts enrolled in extension courses at Texas A&M, taking classes as specific as egg grading, and have found a network of support with other farmers. Sam said, "We have a great dialogue with other farms about what each is doing. Everyone wants to see everybody succeed."

Sam admits they've been working nonstop since starting two and a half years ago, but luckily it's due to overwhelming demand for their eggs, made from healthy free-roaming hens who graze under the sun on bugs, seeds, and forage crops planted around the property. "We started selling last October. We now have about 3,000 hens on the pasture, and we're processing about 300 meat birds per month." The eggs are distributed to local restaurants and groceries including Thom's Market, Wheatsville Co-op, and Farmhouse Delivery. Shirttail Creek Farm also sells grass-fed beef and pastured chicken, available for pickup at the farmers' market.

Despite the physically demanding lifestyle, Sam says they are happy and fulfilled: "The most stark difference is that we're waking up every day and actually doing something we're really passionate about. We didn't have that before. Living where we're living, being connected to the earth, and doing something that's tangible and rewarding like it is has been really good for our mental well-being."

Learning on the Job

Katherine Tanner also spent a decade working and living in urban environments before finding her way into farming. For years, the native Texan worked as an executive recruiter in Seattle, spending long hours on the 30th floor of a high-rise building. "It was super fast-paced and cutthroat. You had to be early, stay late, be in a cubicle, and make as many calls as you could. I missed home, and it became pretty obvious to me that it was time to get back to Texas."

She returned to her hometown of Fredericks­burg and discovered Oma and Opa's Farm while exploring sustainable agriculture in the Hill Country. She began working for the family, utilizing all of the skills she'd honed – including Ger­man language, which is still spoken on the farm. "I came to the table with sales, photography, and social media skills. Immed­iately I came on doing the farmers' markets – designing new tablecloths and new ways of displaying things. My favorite thing is considering how we present to the people."

Katherine had stepped up in her role there when Marion and J.W. Ottmers were ready to hand over ownership of the 49-year-old farm to the next generation. In May, Bradley Ottmers and Katherine Tanner became co-owners of their rebranded Hat & Heart Farm. The farm sells seasonal produce, chicken eggs, goat and turkey meat, and they've worked with numerous restaurants including Barley Swine, East Side Pies, Dai Due Taque­ria, Emmer & Rye, Jack Allen's Kitchen, LeRoy & Lewis Barbe­cue, Odd Duck, Olamaie, Suerte, and Vino Vino. 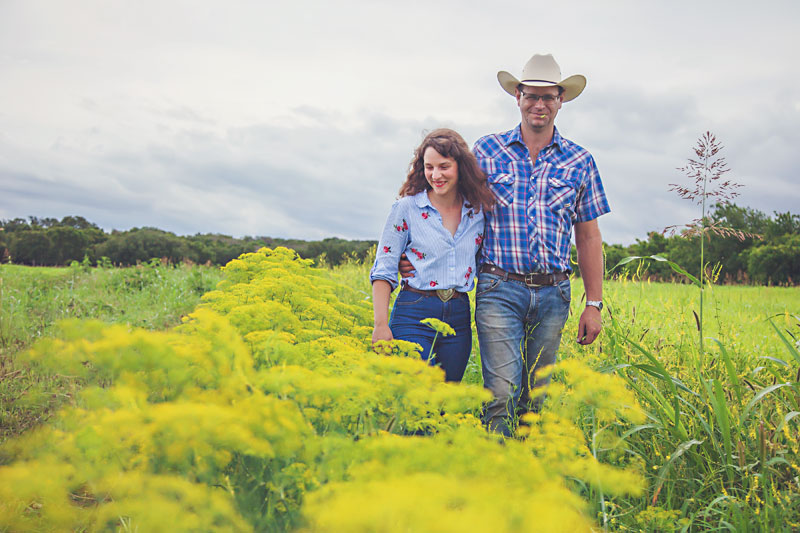 "I'm out there planting, picking, weeding, washing, packing, hauling. I feel like I'm learning a bachelor's degree amount of knowledge every month. I'm learning about goat health and how to herd as I interact with livestock. I'm learning all about solar and rainwater-catching systems. I read legislation that's been passed lately. There's also HR, accounting, and going to the bank," Katherine said.

She acknowledges the physical strain of the role, but explains that it's highly fulfilling coming back to her roots to create something good. "I always wanted to do something of meaning that added to the world and didn't subtract from it. I am uplifted every day even though I'm working harder than I have in my entire life. I feel closer to my community because I know who grew or raised almost everything we eat. There's so much more connection to the earth, to the people, and to the community."

The owners of Shirttail Creek Farm and Hat & Heart Farm can be found at various Austin farmers' markets, and the 1915 Farm animals (and their humans) have a very active social media presence. And for those inspired to get their own hands dirty, there are gardening opportunities at dozens of community gardens in the Austin area available here: www.communitygardensaustin.org.