Restaurant Review: Decadence With a Price at Arlo Grey at the Line Hotel 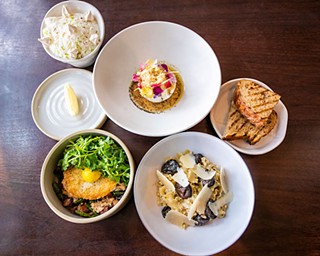 It's been just over a year since Top Chef season 10 winner Kristen Kish opened her first restaurant, Arlo Grey at the Line Hotel (formerly Radisson Austin), and with so many options in our fluctuating, hotel-booming city, it feels odd to now dedicate space to this review. The restaurant is particularly inaccessible in venue and price, but nonetheless delightfully enveloping and creative, and seemingly immune to failure in the court of public opinion. And that's just part of the intrigue. 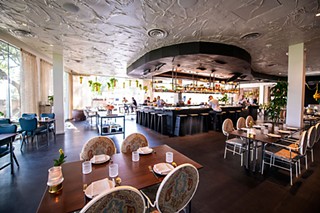 Housed in the heart of prime retail real estate on the corner of Cesar Chavez and Congress, it's both a tourist's dream and local's pipe dream. Step inside the Line Austin, the Sydell Group's third installation of the chic boutique hotel chain (L.A. is the flagship), and the outside hustle and bustle instantly evaporates. The restaurant's design – a collaboration between Michael Hsu's team and L.A.-based designer Sean Knibb – melds seamlessly with the spacious, low-ceiling lobby. Each step toward the host stand encourages the eye to take in the clash of stark black walls and plush gray high-back chaise lounges. The ambience strikes a nice balance between eclectic edge, hotel chic, and K-pop punk, with royal blue chandeliers, mismatched furniture, and walls of windows adorned with brass planters filled with draping ivy (some copper-bottomed, resembling unspent bullets). To the south, a foliage-dense view of Lady Bird Lake (an ideal tableside view of the Congress bats, incidentally); to the west, a view of the pool.

"Why do so many people sit around outside being hot with drinks instead of swimming?" inquired my 10-year-old at brunch.

And on first pass, it is all for show. The experience here only slowly reveals itself as an intimate, deeply personal one, as evidenced by a side wall of Kish's framed kitchen notes, but it's not guaranteed that every guest will notice. On a Thursday evening (reservations highly recommended), my favorite dinner date and I had the good fortune of a highly seasoned server who knew well not only the menu, but how to comfort, how to course, and how to give enough space so that diners may at once feel taken care of and free to embrace the (very, very pricey) affair. Without her, the end result would have likely not been so favorable.

Kish developed the Arlo Grey menu to reflect her culinary style – a meld of French classic, Italian influence, her Korean heritage, and her Michigan upbringing – while utilizing seasonal Central Texas flavors. It's intended for small, shared plates and broken into three tiers based on course and size – mind-blowing, considering the price point. I'm well aware that hotel restaurants are their own unique beast/racket, but we have a bounty of local restaurants strictly using ingredients grown and raised a stone's throw from the kitchen, so I struggle with paying to eat the surcharge of trucked-in components, especially when none of the dishes bring that wow factor. With a cocktail apiece for each two-dish course (three in total) plus one dessert, our tab was well over two bills. And while everything was executed on par with fine dining, neither of us tasted a single dish or drink we'd return for. Dinner was, well, just fine.

The highly popular sweet corn and baby carrot dish (one I only agreed to on the server's suggestion) was brought back for the anniversary and turned out to be a pleasant, textural surprise: The creamy, smoked yogurt base and crumbles of feta and puffed barley made a creative pairing with the crunch of fresh veggies. A tomato junkie, I enjoyed the Texas tomato salad with its variety: smokiness from charred sweet peppers, crunch from macadamias, and whispers of black garlic. The tuna crudo and rye noodles (with Castelvetrano olives, paddlefish caviar, summer bean, and chilled bonito brodo) was shockingly bland, though seared perfectly; the crispy rice boasted a wonderfully golden thin crust and sat atop haricots verts, bits of thick-cut bacon, and mini chunks of crab. Prawn agnolotti, with its paper-thin folded noodles, almost-chartreuse artichoke filling, and shellfish broth, was a flavor combination I just couldn't quite understand. The braised rabbit terrine was delicate, balancing the Parisian gnocchi (fried) on its bed of sauce gribiche and Gruyere. I regret not tasting the malfadini, which Kish has explained is an ode to her mother's pre-packaged beef stroganoff, though this version is served meatless with house-made noodles and champignon sauce. (There are several veggie-friendly dishes.) We had tickets to a Hideout Theatre show and thus enjoyed the small dome of vanilla-creme-filled lunch box chocolate cake, complete with house-made potato chips and a warm coffee sauce drizzle, to go.

Brunch was not as smooth-sailing, to the degree that I'd rather not even rehash it, but here we are. Despite having no reservation, we were seated immediately, only to wait a solid five minutes before being addressed and watered, another seven to order drinks and an appetizer (chickpea fries with ricotta, green relish, tomatoes, and fried garlic), and a whopping 25 more for a burger and bread pudding. My Bloody Mary was undrinkable, but my replacement, a graciously offered "Her and Her" – Pimm's and strawberry lemonade with cucumber – was delicious. At one point, we saw four staffers struggle to open a bottle for a table of self-proclaimed wine experts (one claimed to own a wine boutique in L.A.), who just watched – perhaps an in-summary of the meal. The infamously pricey burger ($18) was, I'll admit, absolutely delicious – due largely in part to the not-so-subtle caramelized onions and incredibly velvety aligot whipped potatoes. Spring for the golden, egg-shaped hash browns if only to admire them, as well as the luxuriously decadent croissant and bread pudding with tiny bursts of pomegranate seeds and candied orange rinds.

A few asides: The valet is $10 with validation, and the restaurant is boldly LGBTQ-friendly and trans-inclusive, which is something every traveler – queer and ally alike – should look for when booking. Make a stop to the restroom, where a female voice loops the Korean Cinderella story, which Kish's mother read to her as a child, and the English text is black spray-painted across the walls. It's those kinds of details that help remind the diner of the restaurant's intentions. And while it's extremely apparent that Kish and her talented culinary team embrace the "food is love" ethos, it's still, after all, a hotel restaurant. I can only hope that Austin visitors will venture past these gorgeous walls and try a dish or two from some restaurants with less celebrity, less L.A., and even more heart.

[Editor's note: We corrected the name of the Her and Her cocktail.]

Arlo Grey at the Line Hotel