Pam Pritchard Serves Up Unpretentious Hospitality at the Tigress Pub 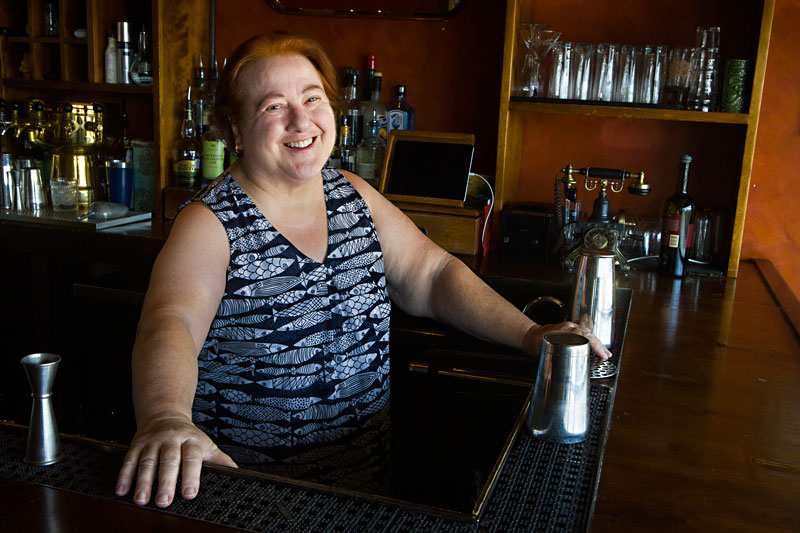 What does biotechnology have in common with a really well-crafted Old Fashioned? Ask Pam Pritchard, the multitalented owner of the Tigress Pub.

After 20 years in the biotech industry, Pritchard decided to throw in the towel. "I'd really gotten to that point where I'm like, well, I've done that, I've worked there. So I thought, God, what else do I wanna do," and lo and behold, Pam the microbiologist took up a different kind of mixing, which was not much of a leap from her last career. "I pretty much had measuring and mixing down working all those years in the lab, but I'm kind of naturally into hospitality. I love people, I love talking, and I like being up late at night."

When she opened the Tigress Pub in May 2010, the North Loop strip was far from the legendary hipster hub it has become. Pritchard seems to know the origin stories of all the businesses on her block and refers to the owners of Workhorse Bar as her big brothers. "They helped me move this in," she reminisces, gesturing to the booth. The owners of Drink.Well started out as patrons of the Tigress. "We have quite an eclectic group of stores and we all get along. We're very friendly with each other."

When she started out, Pritchard approached her business with methodical dedication to learning the craft. She interviewed bar owners around town, curious to know not only how they did things, but why. She questioned seemingly unshakable traditions, like the 2am closing time. "Because I thought to myself, it gets kind of crazy in bars around 1am. I want conversation, I want good flavors, and after midnight, things get kinda funny. Maybe you shouldn't have this strong a drink after midnight." Pritchard realized early on the wisdom of trusting her instincts. "You think, 'Oh, I have to make it a sports bar. Oh, I have to make it kind of a disco place.' You don't; you just have to make it happy for you. And it will trap people who like that. And then everybody will get along."

The Tigress feels like a cozy living room, with wood furniture and bright colors. The music stays low, and classic black-and-white movies play unobtrusively on the small TVs – a far cry from sports bars or more stylized saloons. Having spent significant time in England, Pritchard was so taken by the neighborhood pub scene that she wanted to build her own twist on the concept. The name is an homage to the rich history of those pubs that originated when people were less literate and thus were often marked with pictures: "They're all named after things, objects, like the flower pot, the dolphin, five lamps, five stars, you know. There's no Mel's place or Pete's Tavern." Now, a sly-looking lady tiger stretching languorously guards the entrance of the Tigress.

Perhaps it is this neighborhood vibe that has kept the same two bartenders, Kelsey Caudebec and Holly Coleman, there for three and four years, respectively, much to Pritchard's surprise: "You know, you're not supposed to be a lifer here, I'm the lifer. I always tell them, 'You guys can leave whenever you want.' I don't want them to leave, but at the same time it seems normal that that's the progression. They both feel very committed to this place."

And no wonder they feel committed. Pritchard takes every opportunity to promote their work, jumping at the first chance to offer a taste of Coleman's bitters brand, Bitter Bitch. Each cocktail is created by either Pritchard, Coleman, or Caudebec, and their names appear below each clever title as a byline. Credit is given where credit is due. The lovingly crafted menus are all archived, ready to be compiled for a The Tigress Cocktail Book at some point. But for now, Pritchard would rather spend the money on her staff, taking them on Christmas trips to Chicago to show them her favorite bars.

Pritchard approaches hospitality with the same familial dedication that she has toward her staff. "You're here to be with friends, you're not here to drink alcohol necessarily. And because of that, it's about hospitality. It's inhospitable not to have something for everybody." Pritchard intentionally cultivates a space where even pregnant people and their babies feel comfortable: "I'm always like, 'Yeah, bring those babies in,' especially if they're, like, still not walking. They're great! Who wouldn't wanna have a baby in a bar, you know? I know too many moms that get isolated. You're gonna be safe here. We're not gonna let any trouble happen to you. Enjoy a beer."

On the last three menus, she offered a mocktail for those abstaining. And not a sad, saccharine Shirley Temple; they're a sophisticated affair, often flavored with the same fresh ingredients that make up the alcoholic drinks. A small garden on the back patio provides homegrown basil, rosemary, lavender, and a forthcoming sage plant. Pritchard makes many of the syrups herself; a cherry syrup mixed with balsamic vinegar spices up their version of a Manhattan in the fall.

Perhaps it's the microbiologist in Pritchard that leads her to experiment with unique flavors. A self-described lover of weird, she frequently concocts oddities for adventurous customers. Possessing a bottle of fermented horse milk gifted by a customer who travels frequently to Afghanistan, Pritchard ideates a cocktail using what can only be described as a pungent carbonated bleu cheese drink with a horsey smell. "So my idea was ... I love bleu cheese. Bleu cheese makes me think of figs, or dates, so I'm gonna put some dates in there, mash 'em up, and then I'm also thinking, maybe I'd put some bourbon in there." A cocktail only a true mixologist could love (unfortunately, the horse milk cocktail will never be on the menu due to the lack of a steady supply).

Pam Pritchard's down-to-earth spirit is a big part of what makes the Tigress feel so homey. You can idly watch Barbara Stanwyck glam up the screen, or chill on the patio on a humid summer night while sipping a cocktail or a proper pint of local beer. It's the kind of place to bring new friends or old flames, and it's the kind of place where you become a regular fast: "It's been so beautiful, like I've seen people on their first date, then they're steady, then they get engaged, then they get married, and then I don't see them for a while. And then I see them come in with a baby. It's like full circle! When you've been around for nine years, you see the whole thing."

"It's been one of those things. Few things in life are better than you expect them to be. This is better – way better – than I ever imagined it to be. So for that I'm grateful."

Holly Coleman's bitters brand, Bitter Bitch, currently has three flavors: lavender, chamomile & vanilla, and apple. Roots & Cacao, Floral Orange, and Thai Tiki bitters are coming in 2020. Coleman's approach to the craft nods to the history of bitters: "I'm definitely inspired by the original use being medicinal. I think about ingredients in the way they are useful first and create a flavor profile around that." For purchasing inquiries or more info, message @bitterbitchatx on Instagram. Aquifer Storage and Recovery Project Could Mitigate Effects of Climate Change
Council approves phase 1 of project that could store 60,000 acre-feet of water underground by 2040