Frozen Desserts on the Face of the Sun 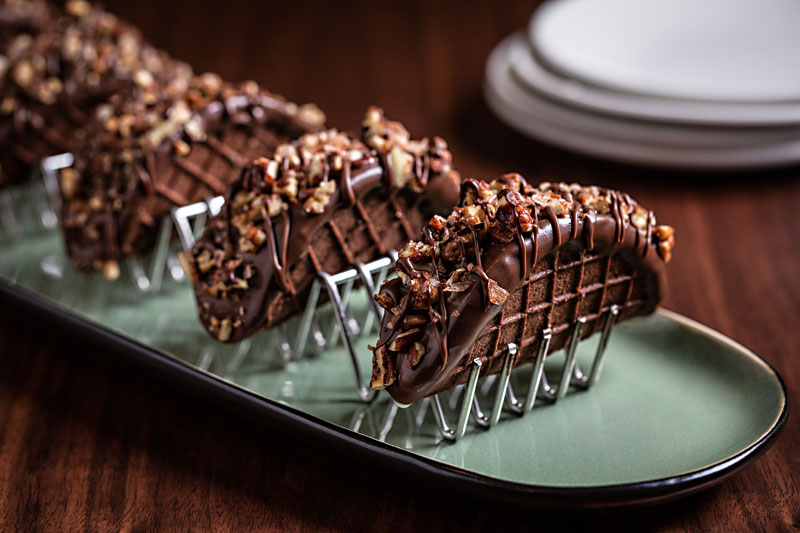 With the current long, hot summer days come cravings for cold, refreshing treats. Austin's dessert landscape has evolved, particularly when it comes to frozen sweets. Our ice cream trucks are now filled with inventive, made-to-order, and globally influenced flavors, many of which are even dairy-free. These trucks won't be circling your neighborhood, though they aim to bring you just as much joy and sweet relief when visiting their parked trucks and storefront locations.

Austin's only frozen banana stand (with two locations) transports customers right into an Arrested Development episode, particularly while ordering "the GOB," pronounced "the Jobe." Just as the beloved character would order, the house specialty comes with two frozen bananas, a double dipping of chocolate, and extra nuts. In addition to their creations, you can build your own. Ethically sourced bananas are first dipped into your choice of chocolate (regular or vegan), peanut butter, or vanilla, then covered in toppings like sprinkles or toffee. Weekly specials are regularly announced, like German Chocolate, Banana Pudding, and Strawberry Nutella Dream.

Inspired by the owner's affection for bingsu, the team at Bar Peached imported a special ice-shaving machine to authentically make Korean bingsu, also known as "milky ice." The dessert menu offers four distinct flavors which all feature a bowl of softly shaved ice, a scoop of ice cream, and homemade toppings. The Choco-Monster uses Amy's popcorn-flavored ice cream, crushed chocolate-filled Oreos, drizzlings of caramel and chocolate syrup, and a sprinkling of "dragon salt" – Maldon salt tossed in dragonfruit powder. An order of bingsu is portioned for two to four people, so plan ahead. 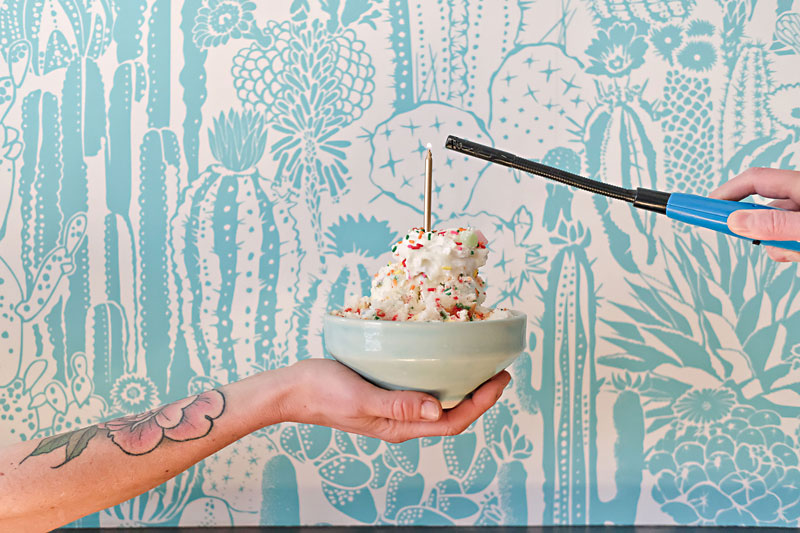 Open seasonally (now through the end of October), Casey's has been a summer tradition since 1996. Brought here by a family member running a shop by the same name in Louisiana, its roots are true to its name. The New Orleans influence means chocolate and cream syrups are offered alongside the expected ones, like watermelon and tiger blood. All 70 flavors are made in-house with real cane sugar, and their ice is proudly harvested on-premise, then shaved to order for that perfectly rounded snowball. To further steer from the usual sno-cone menu, upgrades like vanilla custard stuffing and chile-lime topping can be arranged.

Featured in national lists of what to eat in America, Cow Tipping Creamery's layered soft serve is deemed destination-worthy by dessert-lovers across the country. Born as a food truck, they've matured into a South Austin storefront. From three flavors of made-from-scratch soft serve (chocolate, vanilla, and the weekly special) and toppings (grouped into chunks, crumbs, nuts, fruits, and sauces), you can build your own or choose a pre-designed stacker. The Lemon Drop features layers of fresh lemon curd, honey dust, molasses graham crumbs, and whipped cream. They correctly argue that alternating layers of soft serve and toppings is "so that the last bites are just as good as the first."

Dolce Bacio was opened one year ago by an Italian couple newly planted in Texas. Prior to leaving Italy, Francesca and Dante trained at several top gelato schools, where they learned to make high-quality products from scratch. "Our goal here is to offer the same quality and tradition you find in Italy, crossed with local flavors," Francesca explained with gusto. On the menu, you'll find rotating flavors of sorbet made with fresh fruit and gelato in both dairy and vegan forms. While the pink truck stays parked on the Eastside, they also sell scoops from a bike stand that travels along Congress, between Fare­ground and the Capitol. Also on the menu is affogato, tiramisu, cannoli, and custom gelato cakes.

Executive Pastry Chef Amanda Pallagi-Naim is expertly crafting chocolate tacos at the Four Seasons Hotel. Using the finest ingredients to build the tacos from scratch, chocolate waffle shells are stuffed with Amy's most popular ice cream, Mexican vanilla, then topped with a drizzle of ancho-chile-infused ganache, and a sprinkling of spiced pecans with sea salt. "I'm often told that my desserts are not too sweet. My team knows I'll probably ask where the salt is in order to create that well-balanced recipe." And perfectly well-balanced it is. The chocolate tacos are always available at Live Oak (the upstairs bar), and during happy hour at Ciclo (the downstairs restaurant) when they're half price and come with patio seating.

Owners of Holla Mode opened their Austin-based food truck after inspiration struck on a trip to Thailand, and now they're making rolled ice cream for us using local dairy and organic ingredients. Handmade in front of each customer, either cream or coconut milk is poured onto a steel plate chilled to -30 F, stirred around until it starts to freeze, then thinly painted like a crepe onto the surface with a stiff metal spatula. The newly formed ice cream is scraped into rolls as wide as the spatula which are then stacked vertically into a cup and loaded with toppings of your choice. House recipes include the Honey Bear, made with vanilla, Teddy Grahams, honey, and cinnamon.

Vegan ice cream at its best, NadaMoo makes theirs creamy and flavorful despite being dairy-free. Made from coconut milk and the highest-quality ingredients, they craft tasty flavors like Chocolate Cherry Fudge Brownie, Lotta Mint Chip, and Strawberry Cheesecake. NadaMoo can be found stocked in groceries all over Austin. Visit their storefront on South Lamar to order your scoops stuffed into a taco-shaped cone, or a flavored waffle cone like chocolate or red velvet, then cover it in sprinkles or sauce. You'll even find gluten-free waffle cones and toppings. A coffee menu also awaits, as does plenty of seating inside and out.

Founded by two Taiwanese friends craving a nostalgic summer treat from back home, Ming Chen and John Sun opened their first snow ice shop in 2014 and now have three locations, with a fourth on the way. The bowls are stacked high with thinly shaved ribbons of snow made from your choice of water, milk, or soy milk and your choice of flavor, like chocolate or mango. Frozen blocks are transformed into finely carved shavings extruded from a specially designed machine, and the result is creamy yet light. Pile on fresh fruit, boba, jellies, and mochi, and drizzle with sauce for the finishing touch to your delectable work of art.

Fruity pops, creamy pops, even paleo pops, Steel City has all your ready-made pops, but choosing your flavor – think mango or coconut – is only the beginning. What happens next is what turns ordinary Popsicles into a decadent dessert. You dip, dredge, drizzle, and dust: Dip your chosen pop into milk, dark, or white chocolate; dredge in nuts, sprinkles, or crumbs; drizzle with sauce; and dust with seasoning such as cinnamon, cayenne, or sea salt. Steel City sources fresh, local, and organic ingredients when possible, and is mindful of dietary restrictions, producing high-quality desserts for all types of eaters in their locations around Texas, their home state of Alabama, and the Southeast.

Don’t see your favorites? There are plenty more frozen dessert options at austinchronicle.com/food.