Hanging with the Long Play Lounge and Frazier's Long and Low 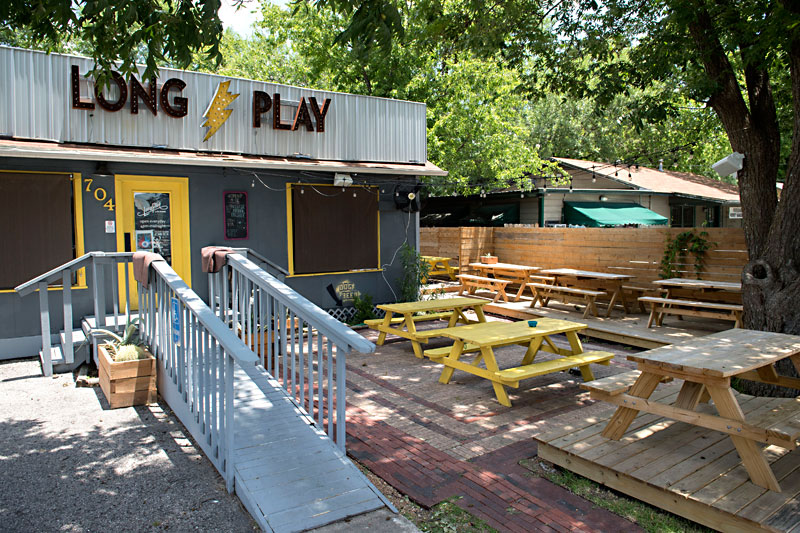 When Will Tanner (co-owner of Hole in the Wall and Stay Gold) spotted the "For Sale" ad for a small house in the Highland neighborhood, posted on Craigslist a mere 17 minutes prior, he knew it was the spot for his new venture, Long Play Lounge.Needing minimal renovations due to its past life as Royal Jelly, walkable from Tanner's house, and in an area lacking the concept he'd been mulling over, the serendipity of the situation prompted him to call Mike Therieau (friend, musician, and Stay Gold collaborator) for partnership, and John Doe (co-founder of first-wave punk band X), who also lives down the street, for cultural consulting.

The move to involve a general manager came organically, as musical connections once again translated over into business. "I knew Tate [Mayeux]; I already knew what he was about, so it would be a good deal if I could talk him into it," said Tanner. Mayeux (of Mayeux & Broussard, with longstanding residencies at HITW and White Horse) had just started a torturous construction gig and was doing his usual weeknight routine – "I literally said my prayers that night before I went to play at HITW. I said, like, 'Just help me, give me anything else!'" So when Tanner popped the question, the deal was sealed.

This two- to three-man crew (Doe has been on tour) oversaw the removal of the ceiling in favor of a vaulted, denim-insulated setup; the building of a new floor; and the additions of textured planks on open surfaces and of vinyl banquettes at two different levels, all calculated to work with their sound system to give patrons the best listening experience possible for the space. With Barrett's Coffee across the street providing some willing regulars from the start (board gamers in particular have become regular sights at Long Play), Tanner and co. have been curating a 300-plus vinyl collection and a growing group of regulars in their groovy bungalow.

"I just wanted a place where I could come. I sometimes worry that people are gonna think that we're gonna be in here talking about like, different producers and microphones and whatever, but really, listening to records is just the way we listen to music. If you're not interested in that, it's cool, but if you are, everyone here is basically a player. When people do want to come up and talk about genres and different kinds of gear, we can do that!" said Tanner.

With a few successful listening parties (most recently, Sour Bridges) under their belts as a way to appreciate local acts' vinyl releases, the crew seeks more musicians who'd like to hang out, get into the music, get exposure, and sell merch. Themed nights will be on the horizon too, but in the meantime, guests can enjoy a dog-friendly patio with an outdoor sound system; an $8, on-draft Old-Fashioned; an inventive, punny cocktail menu (the Fernetta Lynn says it all, but check out the Luna Rosa, a mezcal paloma); and shot-and-beer specials (George and Tammy, Sid and Nancy, Jay and Beyoncé). For now, they serve a modest chili (and vegan chili) and chips and salsa, but plan on barbecue pop-ups down the road.

All in all, the model and vibe at Long Play is refreshing and intentionally mellow and slow-paced; it's designed by music lovers, for music lovers, as a refuge from crowded venues. Feel free to request a record and bring a book or a date – either way, you'll get a "chance to congregate over music," according to Tanner.

Nathan Hill (co-owner of White Horse) and his friend Michael Frazier had also been wanting to open a bar together for years, going back God-knows-how-long into their 15-year stint working together at Kerbey Lane, Hole in the Wall, and White Horse. "We felt there was a need in 78741 for a cozy, no-nonsense neighborhood hangout. We love our good friends over at Jackalope South Shore, and [we] felt they had taken a big step toward cultivating a new district. We wanted to complement the area while sticking to our own personal styles," said Hill.

This style started to come about as Hill, Frazier, and Frazier's wife Amy (owner of Wink Design) collaborated on branding. The couple's pair of basset hounds, Lamont and Clovis, served as the inspiration for the logo and the group's motto: "Long life, low stress." 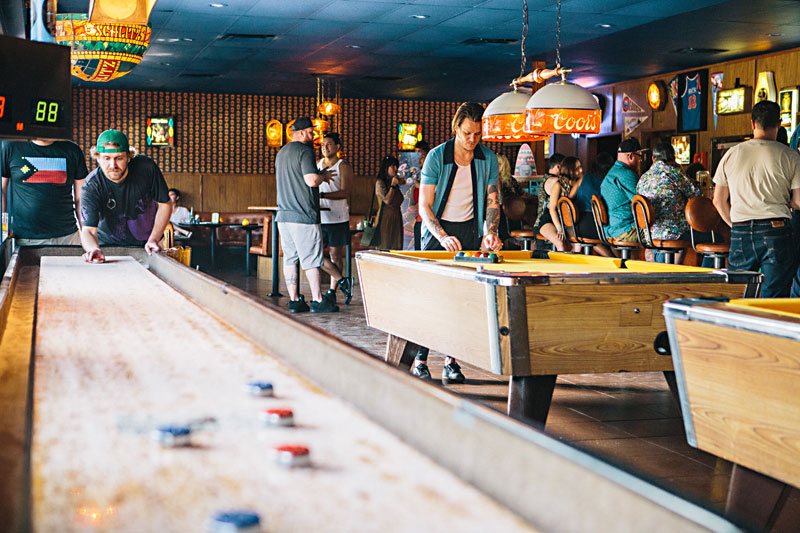 "We wanted to give the place the vibe that it had been there for decades, as we personally are drawn to older dives whenever we travel. Because of Frazier's many years touring the country with his former band Transmography [and currently with the Shut Ups], we wanted to highlight the local brands of different areas of the country," said Hill. Showcasing vintage signs from national brands like Old Style, National Bohemian, and Olympia, Hill feels that "this [gives] the bar a level of comfort for dive bar lovers from around the nation."

Hill describes the space as having elements of an old dive, a greasy diner, and "your granddad's favorite bar," along with some midcentury touches such as hanging lamps, retro wallpaper, tufted booths, and velvet-felted pool tables. "It all comes together to create a space with something for everyone to enjoy," said Hill. "Frazier cultivated the selections in the jukebox to reflect his own wide-ranging appreciation of music. You can hear New Order followed by Neurosis and the Louvin Brothers."

While Hill and Frazier offer a simple menu, emphasizing that Frazier's is a place to drink a draft Coors in an ice-cold mug, they want the public to know that "something for everyone" is their aim and that – whether it be a Jorge's Frozen Margarita (a tribute to the Tex-Mex restaurant that inhabited the spot in the Seventies and Eighties), a 50/50 (a half-Fernet-Branca, half-Campari shot), or a plain ol' Pearl beer – they will adjust the menu over time to best serve their clientele.

The Frazier's kitchen offers everything you'd want from bar food, mostly for $10 and under: hand-dipped corn dogs (add grilled sauerkraut for $1.50), chicken wings (hot curry, lemon pepper, spicy Thai, Buffalo, or XXX Buffalo), and an "always badass, always $5" chopped-cheese sandwich (native to NYC), as well as Beyond Meat options for vegans. Their Saturday and Sunday brunch period offers only three items, but guests are encouraged to combine them in the Fuckit Bucket, consisting of four chicken strips and two pancakes with hot honey and syrup, two breakfast-sausage corn dogs with syrup, and either a bottle of bubbly or a bucket of light beer or Austin Eastciders.

Hill hopes that guests will learn about new music or rediscover an old album from the Frazier's jukebox, or make new friends playing pool: "Frazier's is a place that both welcomes, and is welcoming to, anyone who graces our barstools." 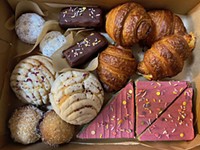