Four Flavors of Local Kombucha That Come in Cans

Chill with a can of Greenbelt Kombucha's fermented tea 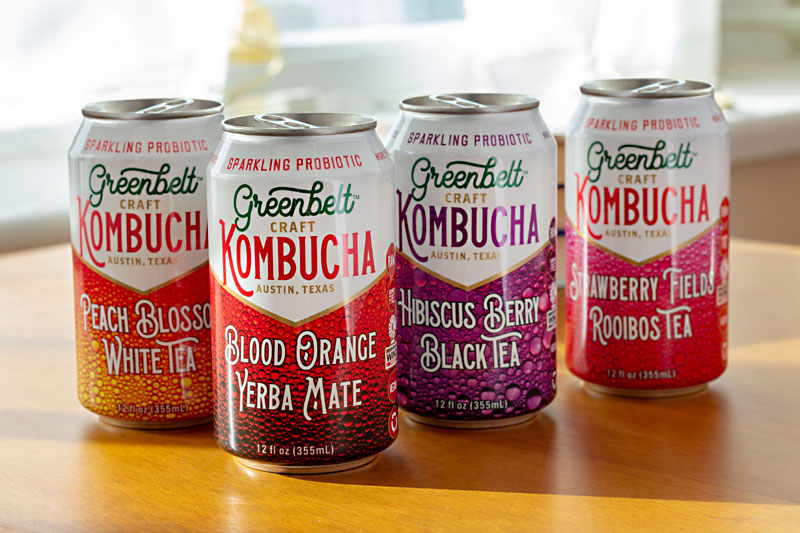 "I grew up in California [with a] hippie mother, and I've drunk kombucha my entire life," says Gavin Booth, one half of food and travel blog Couple in the Kitchen and co-founder of the new-to-market canned Greenbelt Kombucha. In Austin for over six years now, one of Booth's early connections was his now-group of Greenbelt Kombucha partners and great friends, who also happen to be the founders of Strange Land Brewery, Texas Sake, and Barrel Creek Provisions.

"I'm a good cook, and I'm good with flavor combinations that the general public would like, but I'm in no way the type of super craft expert they are. They're probably the best fermenters in Texas – Texas Sake is the number one American sake, and Barrel Creek won Good Food Awards' best pickle in the country," says Booth. This team (Adam Blumenshein, Tim Klatt, Nathan Klatt, and Rick Boucard) is really pushing the move from bottles to cans in the kombucha space – a growing trend that hasn't quite hit the South yet – just as they did for craft beers.

Originally founded in mid-2018, Greenbelt Kombucha hit shelves in mid-March at about 60% of H-E-B stores in Texas (where they're a friendly $2 per can), as well as some "Quickie Pickie-type [stores]" and some local restaurants – Tso Chinese Delivery, Bento Picnic, Jo's Coffee, and a few other shops.

Almost all kombucha on consumer shelves is made with black tea or black tea blends, but because Greenbelt creates theirs using single fermentation, every flavor is made with its own unique tea. "We want every tea we put out to have a central function or health element, so that someone can start their day with, say, the black tea or yerba maté, and end their day going to sleep with the rooibos.

"The rooibos is a really unique, rare tea only found in one place in South Africa; it's pretty much non-caffeinated but really high in antioxidants. We have yerba maté, which is kind of an energy drink replacement trend – it has caffeine, but it has more of a natural element that helps you stay focused throughout the day. Our black tea is a very rare black tea that is actually a fermented black tea ... that we then ferment into kombucha. And our white tea is actually a caffeinated white tea when most white teas on the market are non-caffeinated."

Each can is 40 calories, and zero fruit juices or post-fermentation sugar (required to feed the living organisms during fermentation) are added due to the use of steeped, freeze-dried fruit for added sweetness and flavor.

Because of their single-fermentation process, they're also able to keep the sugar and calorie content really low. Each can is 40 calories, and zero fruit juices or post-fermentation sugar (required to feed the living organisms during fermentation) are added due to the use of steeped, freeze-dried fruit for added sweetness and flavor. Booth adds, "[It's] not only an amazing probiotic, but something that you can drink 1-3 [of] a day because it's also super low in lactic acid. It's very drinkable – you won't ever feel it burning your throat and you can drink more than one a day."

That pretty much eliminates the frequent complaint of vinegary kombuchas, but if that alone is not enough, Greenbelt offers sustainability: The cans are recyclable, and "the facilitation and brewery that we brew out of [located on the border of Austin and Georgetown] is fully operational, with all of the licenses that show we are 100% wind energy operated." On the heels of their hemp-infused tincture and coffee, the legal-in-Texas CBD line of products from Annie and Willie Nelson's sister companies, Willie's Remedy and Willie's Reserve (THC), announced the July release of three new CBD-infused products: topical balm, decaf coffee, and loose leaf teas. The green and black teas – "pure plant beverages" – can be served hot or iced, and each cup has about 10mg of CBD. Just like the originals, the new offerings are infused with full-spectrum hemp oil and contain no isolates, additive ingredients, chemicals, preservatives, or binding agents. "Willie's Remedy is all about giving people easy access to the healing benefits of hemp in the same way we look to other plants for wellness," Mrs. Nelson said. "Everything we create for Willie's Remedy, we use. We're believers in the therapeutic power of plant-based wellness, and of bringing hemp compounds into our daily diet." www.williesremedy.com.

A version of this article appeared in print on July 12, 2019 with the headline: Chill With a Can of (Fermented) Tea