No bartender? No problem. 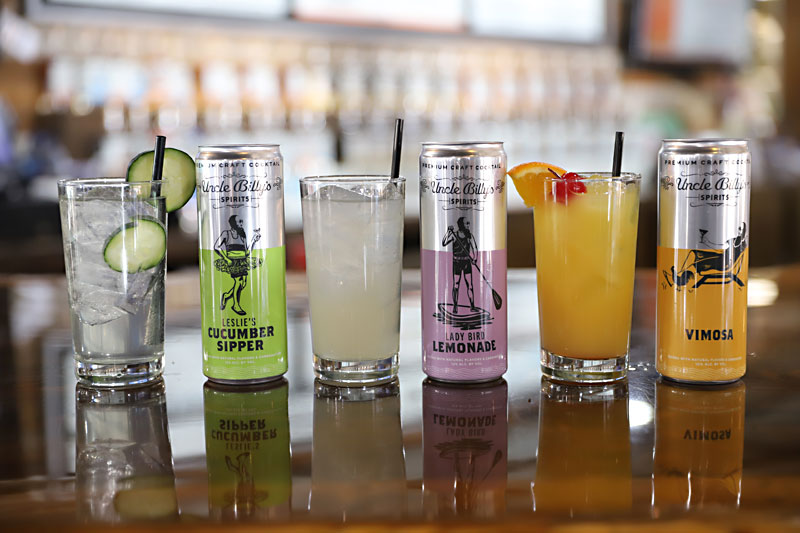 The scene: You're on the lake with your friends and there's a cooler full of beer. But you don't like beer! You prefer cocktails, but it's really hard to mix up a margarita when you're not at home or at a bar.

The scene (again): You're at home relaxing after a busy week and could really take the edge off with a gin and tonic or a Moscow mule. Your options are to put your pants back on and head to the nearest watering hole or make yourself a drink. Do you have tonic? Limes? Your desire to put a point on your week just ended up being a massive hassle.

Enter ready-to-drink canned cocktails, which have surged in popularity since 2017. (In fact, according to Nielsen, sales of canned spirits have grown 574% over the past year or so.) Peruse the shelves of your local package store and find canned caipirinhas, Moscow mules, Old Fashioneds, and Bloody Marys, to name a few. Now, instead of having to purchase discrete bottles of booze and mixers and garnishes, folks can reach for a four-pack of their favorite mixed drink to take to parties or have on hand at home for when it's just too much effort to build a cocktail from scratch.

One notable leader in the ready-to-drink cocktail space is San Diego-based Cutwater Spirits, offering 14 canned cocktails including vodka mules, rum and cola, various vodka sodas, and a crisp, delicious gin and tonic. (I'd tried a canned gin and tonic a couple of years back after reading The Girl on the Train, and it was sickly, quinine-heavy swill; this was a welcome improvement on the genre.) Another contender is High Noon Sun Sips: vodka seltzers flavored with real fruit juice, based out of Memphis. The pineapple flavor tastes precisely like summer and clocks in at a very respectable 100 calories and 3.1 grams of sugar. At about $12 for a pack of four, these canned spirits are both economical and convenient.

Locally, Uncle Billy's launched its own line of sparkling ready-to-drink cocktails in time for the 2019 Austin City Limits Festival. Vodka-based and with a powerful 12% ABV, these grab-and-go drinks are an extension of the on-tap cocktails available at the barbecue "brewstillery" on Barton Springs Road. There's the Lady Bird Lemonade, which is tart and floral and not too sweet. Leslie's Cucumber Sipper is a punchy vodka tonic with a cucumber finish that, after a few, may inspire you to don flip-flops and a tutu like Leslie himself, as rendered on the tall, sleek cans. Indeed, what better way to invoke the Austin brand than the Patron Saint of Weird Austin himself, the late Leslie Cochran? It works. For now, they're available in cans and on tap at Uncle Billy's, and at Austin-area Spec's stores.

Ultimately, there's no substitute for a skilled mixologist who will concoct the perfect potion to satisfy your spirits-related desires. But you can't fit a bartender into your cooler for those trips to the lake, so canned cocktails will have to suffice. And with the options available on the market today, no one will be mad about it.

Millennials have fueled the recent explosion of healthy functional beverages like kombucha and fresh pressed juices, and Frankly is aiming their bottled bevs at the wellness-minded by incorporating real food without the additives. It's a "lifestyle spirits brand," said Philip Risk, CEO and co-founder of Frankly Organic Vodka. The vodka won three medals at the 2018 San Francisco World Spirits Competition and four at the 2018 New York World Wine and Spirits Competition, and gives back 1% of revenue to support no-kill animal shelters and advocacy organizations. www.franklyvodka.com

A version of this article appeared in print on July 12, 2019 with the headline: No Bartender? No Problem.