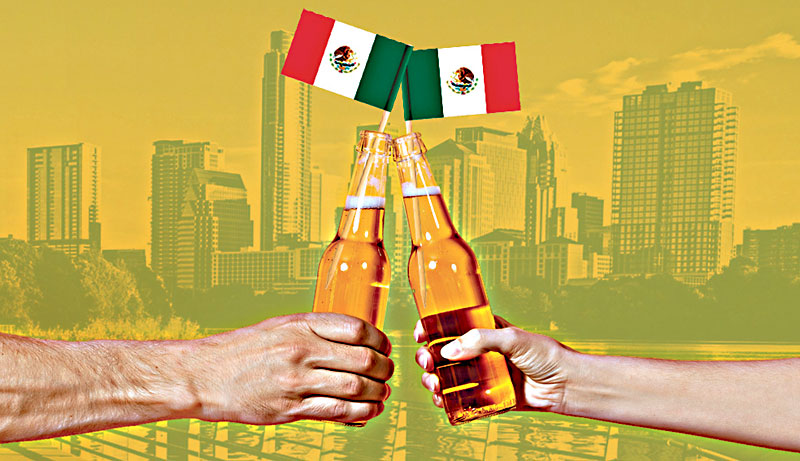 In the same way gorditas from church kermes and Threadgill's chicken-fried steak are grade-A plush, the Mexican lager proves that "comfort beer" is a thing. A very popular thing. Their entire reason for existence is to lull the drinker into a 20-minute vacation. Or to soothe a cedar-torn throat after an afternoon embodying the most fearless grass manicurist on God's green earth. Or maybe even to serve as a crisp contradiction to those aforementioned fatty, rich Texas dishes. No matter your personal escape fetish vision, the Mexican lager has it covered. Which is why damn near every lager being produced in Austin right now is seemingly of the Mexican variety.

Aside from making everyone feel as chill as a weed, what sets apart Mexican lagers (and thus American-made Mexican-style lagers) from their American light lager counterparts? Both evolved from finely crafted 19th-century beers into commercially produced pounders for both football and fútbol fans, and it's still common belief that Mexican-style lagers are simply Vienna-style lagers based on the preferences of early German expats in Mexico. But based on contemporary Mexican lagers, that hasn't been iron law for a long time. If you dig a little, you'll note that many of your favorite imports are Mexican brewers' cold takes on American-style lagers.

Mexican lagers vary widely in flavor, style, and appearance, and, therefore, so do the American-made Mexican-style lagers that pay homage to them. The Brewer's Association (the American trade group for over 7,000 small brewers) doesn't even classify Mexican-style lagers as their own category. That makes American-made Mexican-style lagers a testing ground for a brewery's ability to reflect something as abstract as "sunny porch-time joy" and as specific as "goes fuckin' perfectly with fajitas." Shocking to no one, when it comes to replicating those pour-'em-down-the-gullet beverages from high school graduation trips, every American craft brewer is set on making their Mexican-style lager unique, with plenty of ideas to help you "wild out" on their smooth, crisp cervezas.

"There is certainly a lot of conflicting information out there regarding the origins of Mexican lager," says Joe Mohrfeld, co-owner/director of brewing of Pinthouse Pizza, and producer of Mexican-style lager Burro's Breakfast. "I can't speak to all that, but I know [that] we approach it using a light base malt, a combination of two-row and six-row barley along with flaked maize. This base provides a very lightly colored and highly fermentable beer that [finishes] as a very crisp and clean product."

The core of modern-day Mexican lagers is the signature component: "We use a Mexican lager yeast that imparts a touch of mid-palate sweetness that makes drinking them with a lime so desirable," Mohrfeld says. "This yeast produces a very clean and crisp beer that overshadows the malt and hops a bit, giving the beer a very rounded and drinkable character. I imagine thinking of a mixing board where you can separate different instruments – in this case, malt and hops – and have each be very distinct and noticeable. Or you can create a wall of sound that blends them harmoniously together in such a way [that] they are nearly indistinguishable. This Mexican lager yeast sort of does that in a very nice way, making a beautiful wall of harmonious flavors, which is why limes, lemons, or some sort of acidity is so popular in these styles of beer, as it adds a needed brightness that the yeast often restrains."

Zilker Brewing also uses a specific Mexican lager yeast to lend a clean profile to Mexican-style lager, Brujería. "True to its German heritage, we use very light but high-quality German pilsner malt [and] a corn addition [that] rounds out a very dry beer with a touch of sweetness," explains Forrest Clark, co-founder of Zilker Brewing. "Centennial hops are used sparingly, which is unique to our recipe, but what really makes our Mexican-style lager different [from the macro Mexican lagers] is the small-batch approach to the creation of this beer, which includes using higher quality ingredients."

"Craft brewers take a lot of liberty between these two styles in how they create their version of the beer. [St. Elmo's Mexican-style lager, Señor] Bueno, is designed to taste how I imagine Corona would taste on draft, but without the skunk from a clear bottle. Like Corona, Bueno takes much of its inspiration from the American pale lager."

One might assume a Corona homage tastes like "piss-warm Chango" from the Tarasco bar in Desperado, but Sr. Bueno is a legit Mexican-style banger: a little Porfirio Díaz, a bit La Calavera Catrina, and a dash of You Are the Quarry-era Morrissey.

Hops & Grain founder/President Josh Hare says he's brewed their Mexican-style lager – Chingona – for a few years as part of a collaborative fundraising effort for two Austin charities, Latinitas and Con Mi Madre. His inspiration for Chingona was creating the end-flavor profile drinkers seek when putting lime in Mexican lagers. "Our beer is based around a very simple grain bill of pilsner malt [and] a larger-than-normal amount of acidulated malt. [We] utilize a large addition of Lemondrop hops in the whirlpool, then ferment cool with our house lager yeast. The end result is a clean, crisp lager that has a hint of citrus [and] a nice, light tartness in the finish – similar to the effect of drinking from a bottle that has had a lime on it."

Mohrfeld adds a kick save for all the wedge-heads: "A well-made Mexican lager clearly does not need to be dressed up with [a lime], but you shouldn't feel as if you are a lesser being for doing it either," he jokes.

"I'd say that [Mexican-style lagers] are much easier drinking than a German or Czech pilsner due to a lower hopping rate and lighter body," says Chris Rauschuber, co-founder/head brewer at the Brewtorium Brewery & Kitchen. "And although the tradition of serving it with a lime wedge seems to have sprung from the need to overcome the skunky flavors of beers packaged in clear glass, I've come to appreciate the way it imparts a refreshing acidity to the beer. It also helps tie in the food-pairing with tacos, so that's a plus." Rauschuber mentions that Dad Jokes – the Brewtorium's Mexican-style lager – has a more pronounced corn flavor with a lighter body and malt flavor.

Perhaps above all, Mexican-style lagers are woven into our statehood fabric of thermonuclear summers, grilled meats, conjuntos, and overall cultural revelry. "Mexican, American, and German cultures come together in almost everything around Central Texas," says Winslow. "They've fed off of each other and influenced each other for centuries. The Mexican lager is just another great example of how that continues to happen. German pilsner, American lager, and Mexican lager all fit comfortably with our food, our music, and our climate."

A version of this article appeared in print on July 12, 2019 with the headline: La Vida Lager