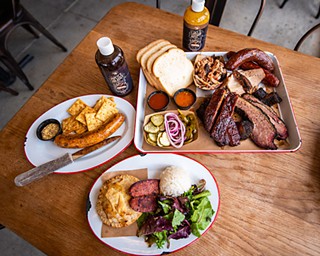 The robust menu at The Switch Belterra Village stakes its claim on Central Texas barbecue. (Photos by David Brendan Hall)

I worked at Salt Lick BBQ when I was a student at Dripping Springs High School, and in the intervening years, I have enjoyed many a plate of their brisket, sausage, ribs, and chicken, as well as copious amounts of coleslaw, beans, and potato salad, all drenched in that addictive, mustardy sauce. I'm certain I'm not alone in having a profound nostalgia around the Salt Lick. And while the original in Driftwood is a fine place to bring out-of-town guests – the rustic setting and Authentic BBQ Patina on the walls certainly lend an air of authenticity – it's a net positive that residents of Dripping Springs and the surrounding area have another barbecue joint to visit when they're in the mood for the national cuisine of Texas. 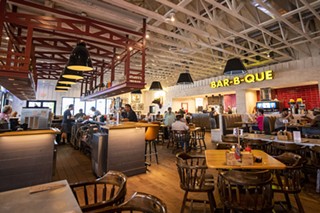 The Switch, from the same folks who brought us Stiles Switch BBQ & Brew in Brentwood, opened just about a year ago in the Belterra Village shopping center off of U.S. 290. It's definitely got a shiny-and-new feel – no walls caramelized by decades of wood smoke here – but the structure itself feels like a homey country joint, complete with a screened-in patio on one side and a giant pit room on the other.

Unlike the counter service setup at Stiles Switch, the Switch offers table service. When we arrived for Sunday brunch on our first visit, our party of eight was quickly ushered to a table in the middle of the dining room. Because we were a large party, all starving, we decided to splash out on appetizers, opting for the chop block queso (just okay) and the smoked jalapeño poppers (rich, smoky, and delicious). For my entrée, I chose the avocado toast, which sported a generous smear of avocado and a perfectly cooked over-medium egg. The promised tomatoes were a little sparse and the bread was over-toasted and therefore a little tough, but I thoroughly enjoyed the plate, which didn't leave me groaning in pain once the meal ended.

My friends ordered the brisket hash, topped with two fried eggs and garnished with a horseradish cream strong enough to make its presence known, but perhaps disappointing to horseradish lovers craving that hurts-so-good sinus spike. Another companion ordered the Texas toast brisket bacon cheesy egg sandwich, an appropriately named behemoth that delivers on its promise of sufficient protein to fuel a growing boy or two. My husband, a Stiles sausage stan, enjoyed his Switch Benedict, but we both agreed that on its own, the biscuit serving as the base was a bit bland, mostly just serving as a pork-and-egg delivery mechanism.

Our meal ended with an order of peach cobbler and eight spoons. I have long considered the Salt Lick's cobbler the platonic ideal of barbecue-joint cobblers, but there's a new kid in town. The perfect marriage of crisp and gooey, topped with a cooling scoop of vanilla ice cream to bathe the delectably tender peaches, is cobbler worth going out of your way for.

Because we live a comfortable distance from Stiles Switch, we ordered items that we can't get closer to home when we returned for dinner. Why wouldn't we, when the dinner menu showcases the Switch's hybrid Cajun-barbecue identity with boudin, sausage and crawfish pot pie, gumbo, and more?

We started with drinks: My companions ordered Pinthouse's Electric Jellyfish IPA from the impressive local draft menu, a "Skinny Water" (a low-sugar margarita thinned out with Waterloo sparkling water), and the Tootsie, a citrusy concoction featuring Deep Eddy Ruby Red vodka and lime juice with a jalapeño kick. In the interest of research, I ordered the "Big Red" Rita, an absolutely outrageous cocktail that takes the concept of the beerita and swaps in a bottle of Big Red soda for the beer. Better women than I have finished that drink (probably).

The four of us split a half-dozen oak-smoked fried chicken wings, which came undressed and accompanied with cups of comeback sauce, white barbecue sauce, and a pleasantly spicy and tangy Buffalo sauce. The chicken itself was well-seasoned, peppery and smoky, and the drumsticks were plump and generous. My spouse ordered the chicken-fried steak, which bore uneven clumps of a blandish floury breading. "It's about half as good as the CFS at Joann's," he said with a wink. (It's also half the price.) The Switch is a restaurant taking big swings, and the CFS is one that didn't connect. I ordered the Cajun Caesar salad along with a side of jalapeño cheese grits (kicky and thick and a decent challenger to Micklethwait's signature side) and comeback slaw (disappointingly bland). The salad was very generous, studded with thick shingles of Parmesan cheese and absolutely delicious Creole potato croutons.

The po'boy was generously stuffed with pulled pork, fried shrimp, gouda, and more. Although my friend loved it, only half was manageable – we had also low-key gorged ourselves on the complimentary hush puppies that the waitress indulgently refilled every time we ran low, which happened frequently because they are phenomenal. (I also have to give a shout-out to the pickles that came with this sandwich. They were fresh and crisp, slightly sweet; I would have bought a pint of them to take home if that were an option.) My other friend took advantage of the pulled pork, unavailable in Austin; it came out with a bright pink bark and was infused with smoky flavor. She was kind enough to share bites with the rest of us – very small ones.

Really, the only complaints I have about the Switch are aesthetic in nature. The space itself is very, very loud. If you're dining with someone who has hearing or sensory challenges, I recommend asking to be seated in the back dining room or on the screened porch. Also, there are gigantic wooden napkin and sauce caddies taking up most of the real estate in the middle of each table, and we found them very intrusive.

While I'm so glad that we have easy access to Stiles Switch close to home, I also really appreciate that the Switch has staked its claim on the Central Texas barbecue landscape. With its Cajun influences and forays into more global flavors like Korean bulgogi, the restaurant is pushing the definition of the genre without losing ground on the classics. The next time my barbecue-loving father-in-law visits from Arizona, I will argue very strongly for dinner at the Switch. 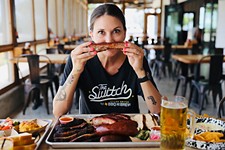 Why Are Some of Austin's Smartest Restaurants Heading Toward Dripping Springs?
The Switch, Pieous, and the League look west