Restaurant Review: Joann's Fine Foods Has Us Wondering How Much Is Too Much to Pay for Chicken-Fried Steak 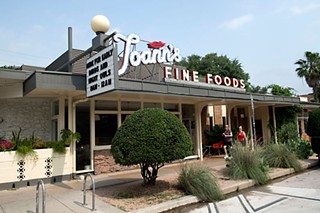 How much is too much to pay for a plate of chicken-fried steak and accompaniments? For a plate of huevos rancheros? For a few spears of cucumber sprinkled with Tajín? When I first looked over the menu at Joann's Fine Foods, I'll confess to a bit of sticker shock, even though it's under the umbrella of the McGuire Moorman restaurant group, which is well known for its extravagant price points. But South Con­gress is changing; even the vaguely seedy Austin Motel has gotten a face-lift, along with its attached restaurant, and with progress comes pricier food, I guess. 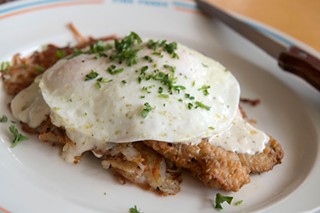 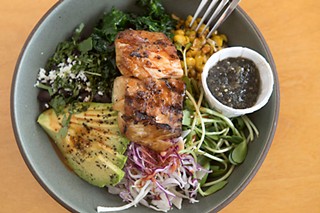 In fact, when Joann's first opened in the space formerly occupied by Snack Bar and El Sol y La Luna, there was some controversy on social media about a $32 plate of chicken-fried steak. Naturally, I leaned fairly heavily on my husband to order it on our first visit, a late dinner on a Friday night. What he got was a large portion of higher-quality beef than you usually get with classic CFS, evenly coated with batter and served with a huge mound of bacon-laden green beans, a goodly blob of smooth poblano mashed potatoes, and a small dinner salad. The steak erred on the salty side, but my husband savored every bite. My rice bowl included a generous helping of white rice, black beans, kale, sprouts, and corn topped with a few fat slices of avocado and a 3-ounce piece of slightly overcooked grilled grouper. It was more food than I could eat in a sitting, but I was uneasy with the $19 price tag for what is essentially subsistence cuisine for generations of undergrads and other poor folks. My cocktail, the South of Fresno, was smoky and spicy-sweet, a pointed reminder that mezcal is almost never a bad idea. My husband and I ordered a piece of tres leches cake to take home (and were silently assessed a to-go fee); it was creamy and not soggy, but the coconut garnish was cut a little too thickly and undermined the cake's otherwise pleasant texture.

We returned for Sunday breakfast with some friends and were seated after a short wait (just long enough to explore the "bodega" at the Austin Motel, where visitors can pick up bathing suits, snacks, vintage Playboys, and one-hitters). To start, we split a few pastries, provided by Swedish Hill, among the four of us. The vegan banana-blue­berry-coconut bread was largely forgettable, but the sweet roll was excellent – tender, moist, and appropriately slathered with gooey icing.

The breakfast dishes were fairly unremarkable. My husband ordered the huevos rancheros, and while his eggs came out over easy instead of the requested over medium, they were drenched in a vibrant ranchero sauce. My migas were nondescript, but the house-made flour tortillas that came with them were very good. Not quite San Antonio levels of house-made tortillas, but damn close. (Vegetarians and vegans take note that both the flour tortillas and refried beans are made with lard, which is not indicated on the menu, so be sure to do your due diligence around hidden animal products.) Our friends ordered the Bodega Sando and the pozole rojo; the sandwich was a beastly open-faced English muffin sandwich with a fried egg, turkey, bacon, cheese, avocado, and what looked like a lifetime supply of sprouts. My friend reported that the sprouts provided a nice balance for the heavier components. The pozole was piquant, generously studded with hominy and pork.

Beyond the food, I was struck by the details at Joann's. The lettuce in the small dinner salad was very clearly hand-cut; while the salad was served on Joann's cute custom dishes, the dressing came out in a paper ramekin. The drinking straws were made from biodegradable wheat rather than plastic, and the high-quality paper napkins all bore the restaurant's kitschy red-lip logo, which is a gesture to hotelier Liz Lambert's mother Joann, the restaurant's namesake. The commitment to the midcentury diner aesthetic was complete, from the thatched-roof tiki bar on the patio to the vintage Laurel mushroom lamp on the hostess stand (which you can find on Etsy for $600). What's more is that we received top-notch service at Joann's. The waitstaff who helped us were friendly without being overfamiliar, spoke knowledgeably about the menu, and when I found a rubber band in my refried beans they handled the situation graciously and expeditiously.

We had a great time on our visits to Joann's, but it's because the atmosphere is comfortable and welcoming and the service staff made us feel like valued guests, not because the food was particularly memorable. Because I'm not an Uber millionaire who retired at age 30 and I don't spend my weekdays eating brunch tacos and taking time for myself, my expectation is that if I'm going to pay $19 for a bowl of beans and rice or $14 for a plate of migas, I want those to be the best, most crave-worthy versions of those dishes imaginable. What we had at Joann's ain't it.

Which brings me back to my original question: How much is too much to pay for diner/Tex-Mex food? We all know that when you dine out, you're paying for more than just the food on the plate. In the case of Joann's, you're paying more for the service, atmosphere, and attention to detail than the actual food – not to mention subsidizing that gorgeous midcentury lamp.