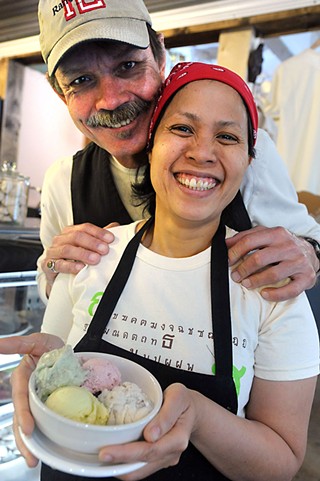 On Saturday, May 11, Jam Sanitchat, owner and chef at Thai Fresh, is co-hosting a Mother's Day cooking class with her own mom, Orawan Sanitchat. Neither Jam nor her mother remember their official teacher-student relationship in the kitchen, or when exactly Jam learned how to cook. Jam recalls phoning her mom, who lives in Thailand, to chat about offering cooking classes some 15 years ago, to which Orawan replied, "When did you learn to cook?"

Jam didn't really show an interest in cooking growing up, but that doesn't mean she wasn't frequently in the kitchen while her mom crafted family dinners every night. She was always nearby, grinding curry paste with a mortar and pestle on the kitchen floor, watching her mom scoop spices into the palm of her hand – weighing and smelling, but never measuring. But the truth was, Jam would rather have been anywhere else.

Orawan, on the other hand, seems to be more at home in the kitchen. "My husband jokes that we need to get her a cot for the kitchen because she spends all her time in there," Jam says. Yet even though Jam never actively tried to absorb the culinary arts her mother found so fulfilling, simply being present as Orawan cooked every night turned out to be enough to plant a seed.

That seed didn't sprout until Jam was 18 or 20, but when it did, no lack of formal training was going to stop her. As she nurtured her newfound passion and began experimenting in the kitchen, trying to remember how her mom had done it all those years, there were a lot of late-night calls home. Jam would ask for instruction and clarification on favorite recipes and proper volumes of spices, a difficult thing to explain over the phone when measurements aren't made in teaspoons or cups but by the weight of the ingredients in your palm or the smell of simmering sauces.

Once Jam discovered she enjoyed time spent creating in the kitchen, she looked forward to working side-by-side with Orawan, both in Austin and in Thailand when she flew home for visits. She was determined to learn as they developed recipes together, like the glass noodle salad dish they'll instruct home chefs on how to make during the event. Since opening Thai Fresh, Jam has been sharing the techniques and recipes her mom taught her, effectively imbuing Orawan's presence and wisdom into the classroom, but this is the very first time Jam will have her mother by her side with the students, and the first time Orawan will see her daughter share the time-honored techniques.

"I'm excited to introduce my mom, [the woman] who formed who I am and my style of cooking," Jam says, though she wonders if Orawan will pipe up occasionally during class to correct her cooking methods. "It's a chance for me to bond with her."

And for their students to bond with their families as well (though attending with your mother – or offspring – isn't required). Together, the Sanitchat women offer hands-on instruction for some of their favorite family recipes, including green curry and the chicken rice that Jam still claims as one of her all-time favorite dishes. Pad ka prow, Thai Fresh's famous coconut milk ice cream, and some drinks will also be part of the special event that takes place at photographer Jody Horton's studio. It promises to be a special time where two generations come together to share their love of cooking – and their heritage.

Tickets for the class at St. John’s Studio are $100 and can be purchased at the Thai Fresh website, www.thai-fresh.com/cookingclass.