Empowering the Syrian Refugee Community One Mediterranean Recipe at a Time

A mother's story of falafel and family 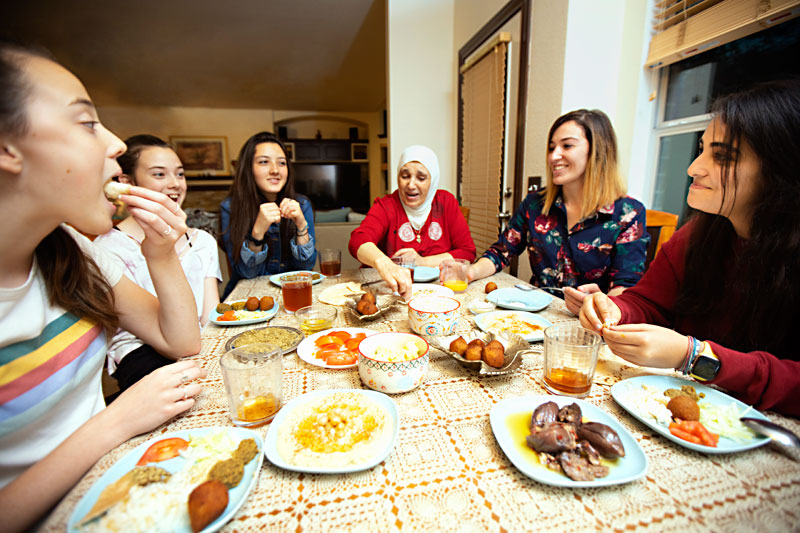 For Afia Foods founder Farrah Moussallati Sibai, spending time in the kitchen has always been intimately tied to a sense of home and her Syrian heritage. Her local food business, named for an Arabic word meaning "bon appétit" or "to your health," supports refugees through economic empowerment, community-building, and shared meals. "Our goal is to break bread with our neighbors from all backgrounds through Afia Foods, so they can enjoy our authentic Mediterranean cuisines, our heritage, and hopefully learn just how special our community is."

Eating and cooking Syrian food with her family offered an important sense of cultural identity as she grew up in the United Kingdom, and Moussallati Sibai said it took a few years to fully assimilate after she moved to Austin in 2012 to grow her blended family with her husband, Yassin. "During that period, there was a huge influx of Syrian refugees arriving in Austin, and I spent the majority of my time volunteering at nonprofit organizations, helping them adapt to their new lifestyle. I related to these woes myself, so I was thrilled to help and provide much-needed comfort at a difficult time."

Moussallati Sibai saw firsthand how critical a role food plays in connecting people to memories of home. "My mother-in-law, like many who flee their homes due to unfortunate, unsafe circumstances, missed her life, her home, her kitchen," she said. "The only place she found comfort and felt at home was in our kitchen – it's her domain. It was here that she would cook the most authentic, traditional meals and feed the whole family with recipes from her mother, her grandmother, and even her great-grandmother." Moussallati Sibai also discovered that food could be a tool for economic empowerment, particularly for mothers. "The women would often make food and sell it to the community to help their husbands out," she said. "It's an easy way for them to make money without leaving the home."

And it was these combined experiences – and empathy – that led to Moussallati Sibai's decision to create an employment program for Syrian refugees, who would go on to become the backbone of Afia's factory workforce. "Years later, after I founded Afia Foods, I decided I wanted to provide a safe and comfortable working environment for these refugees, an environment where they could communicate in a language they can speak and support their families."

Her primary inspiration for Afia Foods is rooted in her own family's story, tucked inside one of the only family heirlooms her mother-in-law was able to bring along on the journey to escape tensions back home. "As the war broke out in Syria, she had very little time to pack her most valuable and sentimental items, her life, her memories, before the borders closed. One priceless item that she packed and brought with her was her black recipe book, filled with recipes handed down from generation to generation." 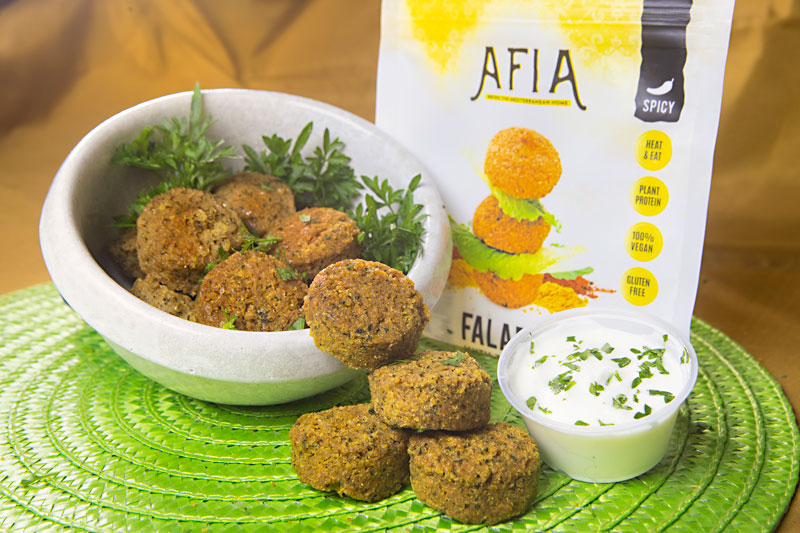 But re-creating those familiar comfort foods at home proved difficult, something she realized while grocery shopping for Syrian dishes in Austin: Many spices and ingredients simply weren't available. And despite Mediterranean-inspired recipes, restaurant concepts, and food trucks becoming hugely popular in the U.S., the wave still had not expanded past niche items, remaining inconvenient for busy families. "The frozen section was especially bare – I have four daughters, so I like to have stuff in the freezer for my kids when I get home after a long day. When I could find them in ethnic stores, it wasn't a great variety, [so] when my mother-in-law arrived with her black recipe book I was like, 'Why isn't this at H-E-B? Why isn't great Medi­ter­ran­ean food available to more people? Why can't I make these tastes more mainstream while supporting the refugees I [have] been working with?'"

The recipes from that little black book are the very ones used for Afia's falafel and kibbeh – a dinner dish made with ground beef or lamb combined with bulgur wheat, pine nuts, and warm spices like cinnamon and allspice – along with influencing their more modern variations like spicy turmeric falafel and jalapeño kibbeh. "The kibbeh started out because my mother-in-law was making kibbeh, and I saw how difficult and time-consuming it was. But everyone loved it so much! I wanted to find a frozen version to help her, but when I didn't find anything out there and saw how much everyone – Arab and American – loved her recipe, I was determined to create something that would make her life easier and create something my kids always wanted.

"As for the falafel, we always have falafel over the weekend for breakfast. When we'd go to the park, we'd always bring falafel sandwiches. I thought more and more about making a version of these recipes because it was so mainstream and very sought-after by Americans – I didn't need to educate people about it. I wanted to create a new Mediterranean category that everyone would feel comfortable exploring."

For Moussallati Sibai, Afia's mission is about more than providing culturally sensitive employment and expanding the range of Mediterranean options available in neighborhood H-E-B stores beyond hummus and pita chips – it's about emotion. "Food feeds our hearts and souls," she said. "Typically at the center of any gathering of any color, culture, religion, food is present and brings us together ... so being able to share our recipes' authenticity with Texas has been a great reward. It is a humbling feeling that we are also sharing generations-old traditions with Americans who maybe haven't had these foods before. [Now] the greatest support Afia Foods has enjoyed has been from our Texan neighbors – their enthusiasm and spirit in supporting local businesses such as ours is why our business is thriving today."