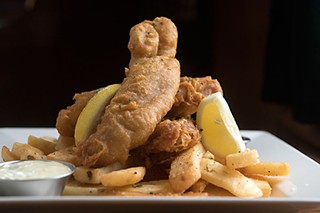 It feels a little silly to review the food at an Irish pub, because really, the primary source of nourishment in such establishments is liquid and fermented, in the form of many beers and ciders, Scottish and American whiskeys, and a few signature cocktails, including a (very potent) frozen Irish coffee. But, Darcy's Donkey, opened last fall in the former Austin Java space on Barton Springs Road, prides itself on its "elevated traditional Irish menu," so we decided to take the bait.

“Breakfast in a Glass” Bloody Mary

We made our first visit to Darcy's Donkey for dinner on a Friday night. We opted to sit on the patio, where we were surrounded by dozens of other people in groups larger than ours and with dogs in tow, getting their weekends off to a festive start. After we ordered our drinks – an Argus Apple Bomb for me and an Austin Beerworks Peacemaker for my husband – we dove into an assortment of appetizers. From the signature prátaí (potatoes) menu, we tried the loaded fries, topped with cheddar cheese sauce, whiskey bacon, and sour cream. These were not a hit; the bacon tasted defrosted and the fries wanted salt. The rasher-wrapped Texas quail poppers were similarly bland, but inoffensive. Probably the most successful of the three starters we tried was the Scotch egg, even though it did not come out soft-boiled as promised on the menu. Nevertheless, the sausage was flavorful and my husband, a Scotch egg aficionado, wasn't at all bothered by the lack of gratifying ooze from the medium-boiled egg within. 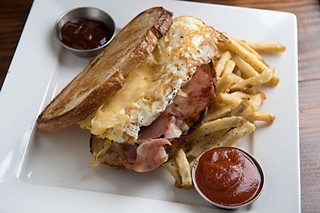 For our dinner, we ordered the fish and chips and the chicken curry pie. The fish and chips were nigh on perfect (as should be expected from any Irish pub worth its salaan) – the fresh cod was crispy and delicious, and the steak-cut fries were perfectly seasoned. It was difficult to select a pie from the menu's extensive offerings, but it seemed appropriate to choose a curry. The filling was very tasty, with tender cubes of butternut squash and generous chunks of chicken, peas, and carrots in a curry sauce with nicely developed flavors (instead of a clanging, one-note curry powder profile). However, the pastry itself was quite dark, and as a result didn't offer the satisfying buttery flakiness of a well-executed savory pie. If I had been working expo that night, I would not have sold that pie. 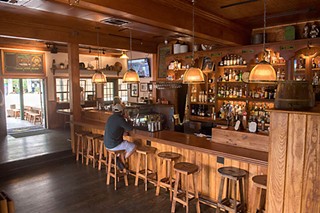 We topped off our meal with the spiced apple bread pudding, which was large and perfect for sharing. When we left, there were more groups of twenty- and thirtysomethings gathered on the patio, all cheerfully working on cultivating their hangovers.

Our next visit was for Sunday brunch, which was a much quieter, low-key affair. The more limited menu offered a few variants on a classic breakfast fry-up with bangers and Yorkshire puddings, but we opted for Paddy's Sammy and chocolate stout cake French toast. The former is a great big oaf of a sandwich, with two giant slices of buttery bread enveloping sausage patties, bacon, and fried eggs topped with melted Dubliner cheese; together with the comically huge mound of fries served alongside, you're pretty much set for the day in terms of calories and grease (in a good way). The chocolate stout cake French toast wasn't very eggy, and the pork sausage that came with it wasn't hot at all, but there's not much to complain about when you're basically having chocolate cake for breakfast.

While the food at Darcy's Donkey was fine – I don't know that it has earned a spot on our regular dining-out rotation – I would have loved to have seen a few more overt gestures to Irish cuisine on the menu in the form of some brown or soda bread, Irish cheeses, more seafood and curries. The meat pie portion of the menu certainly speaks to the global influences on many traditional foodways, though, and I wish I'd had the time, budget, and stomach space to sample more of them.

What Darcy's Donkey lacks in innovative cuisine, though, it makes up for in terms of a welcoming space with warming details, from the gorgeous wooden patio tables to the piano for sing-alongs, to the traditional Irish snug (a tiny room for more private gatherings) guarded by a fairy door and a pile of coins paid as passage. There's an air of conviviality in the space, even when there aren't many patrons around, and the service is consistently friendly. Indeed, with all the dense housing sprouting on Barton Springs Road, it's easy to see the appeal of Darcy's Donkey, which could easily serve as an attractive alternative to the other chaotic, tequila-soaked options (with long waits for a table) nearby.