Eating Bugs Is the Future of Sustainable Farming?

Austin entomophagy advocates bring the crispy, crunchy taste of crickets to the masses 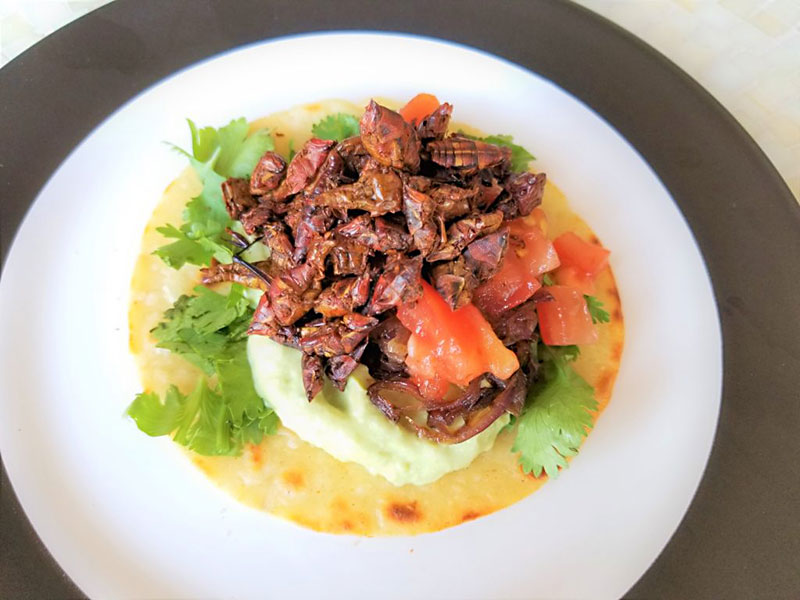 Suggesting to the general public that entomophagy – eating insects – is the future of farming might raise some eyebrows. But what if they're dried and salted and taste like bacon?

Robert Nathan Allen likes to let people in on a little secret: Bugs taste like what they eat.

Former bartender and insect consumption advocate Robert Nathan Allen (or RNA as he likes to be known) of local nonprofit Little Herds and the North American Coalition for Insect Agriculture said that he likes to let people in on a little secret: Bugs taste like what they eat. That means that not only are bugs a great source of protein (humans have a specific genetic marker to digest the protein in exoskeletons), but they're also instrumental to a dish's flavor profile, adding nutty, buttery, caramelly, or citrusy flavors. And with such taste diversity, chefs all over Austin are keen to experiment with this ancient, yet modern, ingredient.

"Just in the past few years we've been able to work with folks from Dai Due, Odd Duck, Barley Swine, and Eden East. Folks like Lenoir [too]," said RNA. Salt & Time also tried their hand at insect charcuterie when "they did a mortadella with toasted crickets instead of toasted pistachios." Although there are tens of thousands of edible insect species, crickets really steal the show. RNA explained it's because they are the crème de la crème of the insect world for both chefs and producers. Easy to farm, and available almost worldwide, crickets are also incredibly tasty.

"Crickets are actually boring in the sense that they have great flavor and they're crispy and crunchy. So it's not like you have to make something that's really, really inedible into something delicious," explained Mohammed Ashour, CEO and co-founder of Aspire, the only U.S. commercial farm where crickets are bred solely for people to eat. Aspire, which began as the brainchild of Ashour, Gabe Mott, and Shobhita Soor – who in 2013 won a $1 million Hult Prize to create a business aimed at tackling global food insecurity – has become a sustainability-focused enterprise doing more than just farming the Acheta domesticus species of cricket.

Of course, there are arguments that eating insects is not as sustainable as it seems. However, Ashour explained that he and his colleagues specifically chose crickets because they have a history of being farmed without adverse effects to the animal itself or to the environment. Furthermore, although it does take energy to feed and process these insects to make them edible, due to their size, crickets require about 12 times less food than beef for the same edible weight gain, and likewise, the quantity of energetic input to process them is drastically reduced.

Although Aspire still supplies local restaurants and many of the businesses that made up the Austin insect mecca of 2015, today they are a consumer packaged goods business producing cricket protein-infused products like protein bars and bites. In fact, Ashour shared that Aspire will officially launch their protein bites, bars, and crispy crickets in 84 H-E-B locations across Austin, San Antonio, Dallas, Houston, and Midland on Friday, Feb. 15. From whole crickets to pulverized powder, unless you're reading the ingredients list, it can be difficult to detect whether or not products are made with these summertime insects. "Year over year, you're talking about double, triple-digit growth in the category," explained Ashour. RNA agreed: "It hasn't been until really this past decade that the broader perception of the idea has really moved away from Fear Factor ... to looking at it as the next superfood, a viable alternative protein."

Despite this growth, Aspire still remains under the radar. "I think the culinary side is what really drives education and I think we need to do a better job of putting the word out in Austin specifically." The problem is, often it is only RNA and a handful of others evangelizing this alternative protein source and doing much of the intermediary work between the few cricket farms in North America and Austin restaurateurs. There is the potential for interest to gain momentum, but both advocates agree that to advance the normalization of cricket protein within the Austin culinary scene, nothing will be more advantageous than simply getting the food into people's hands en masse through making the protein affordable, widely incorporating it into pantry staples, and educating children that insects are "just another option on the shelf." RNA maintains that it's going to come down to the Austin foodies' willingness to branch out into new flavors. Once that happens, "[eating protein is] going to be on the whole more healthy – or less unhealthy – for you and a little less resource intensive."

A version of this article appeared in print on February 15, 2019 with the headline: The Crispity, Crunchity, and Maybe Even Peanut-Buttery Taste of Sustainable Farming