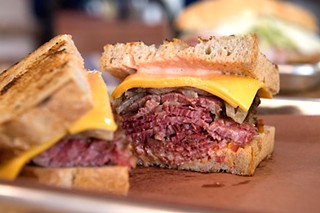 John Young, a NASA astronaut on Apollo 16 and commander of the first space shuttle mission, smuggled a corned beef sandwich aboard the Gemini 3 in 1965. Upon revealing his contraband, Young and his sole crewmate, Gus Grissom, chatted briefly about it and Grissom tasted the sandwich, causing crumbs of rye bread to float around the cabin. Naturally, this "$30 million sandwich" sparked a review by the U.S. House of Representatives' Committee on Appropriations and politicians ranted about the crumbs interfering with spacecraft operations. Why do I possess this trivia nugget? Well, apparently I've developed a mild obsession with the intersection of outer space and deli sandwiches, thanks to Otherside Deli. (Swear to goddess, I just looked down and realized I'm wearing a NASA T-shirt.) Formerly a wildly popular food truck parked at Back Lot, the brick-and-mortar opened in the Delaware Subs spot on West 34th Street in early November last year. With an extended menu full of delicious meat and carb combos – plus the ever covetable dedicated parking – it's no wonder they're selling out of pastrami and corned beef on the regular. There's a small picnic table patio out back and the interior is charmingly no-frills with blue painted half-walls, an open-face letter board starring the weekly special, cafeteria-style tables and chairs, and three framed vintage movie posters – Barracuda, Close Encounters, and Plan 9 From Outer Space. The simple, cozy space speaks volumes about the restaurant's focus: It's all about the food.

Otherside Deli is primarily a breakfast and lunch spot, and it's reminiscent of a friendly New Jersey deli, because, well, it is one. Co-owner Conor Mack, a Jersey Shore native, works alongside one or two other employees to cook, bus, run the "cash" register (they're totally not called that anymore), and chat with every customer. In fact, on one of my visits, I asked about the breakfast menu (online, coming soon) and he explained pork roll to me – a native Texan – walked right over to the flat top, and grilled up two sample slices for me and my date. "Pork roll is both my favorite thing in the world and the hardest thing to describe to someone who's never had it," he wrote on Instagram. I won't even try, other than to say their breakfast menu offers the thin-sliced delicacy grilled with eggs and cheese on a Wholy bagel, and that's definitely a reason to roll out of bed. They also serve pastrami and cheddar cream cheese, other breakfast sandwiches on kaiser rolls, Flat Track coffee, and coffee crumb cake.

But the real deal here are the hot and cold deli subs. (A very quick aside: Unlike the scandalous space crumbs, Otherside Deli's sandwiches do, in fact, hold together, and it's not only due to gravitational pull – they serve Sour Duck Market's rye bread.) In addition to a borderline famous Reuben, they've got a host of other otherworldly sandwiches – the Otherside, the Barbarella, the Serling, the Third Kind. And for the monster human, there's a $20 Monster Mountain sandwich with a 2/3-pound heap of pastrami with deli mustard (they have a bottle on the table and it's highly addictive) on rye. My absolute favorite hot sandwich here is the Roddy, their version of a patty melt, with a pile of tender pastrami, gooey American cheese, grilled onion, and Russian dressing on toasted rye, with the very zesty spicy pepper relish add-on. It's the kind of sandwich you'll daydream about for days. I opted for a huge whole dill pickle sliced into spears and a bag of chips, and probably should've added a salad, but life's short. Two shareable sides, the fat potato latkes (with applesauce and sour cream) and the chunky potato salad, needed just a smidge of salt, but that's an easy tableside fix. Drink options are limited to standard-issue sodas, Dr. Brown's sodas, and an Austin-based kombucha, but they're in the TABC beer and wine license application process.

One of my litmus tests for a deli is a meatball sub, and Otherside's – with house-made meatballs, well-balanced red sauce, and creamy mozzarella on a soft roll – is very, very tasty. (They've got an eggplant version that I have my eye on, too.) And, cheesesteak fans, rejoice: their versions – sliced rib eye, chicken, or mushrooms with onions and peppers and a cheese choice – are way above par as well. Of the several cold subs, all served with lettuce, toms, raw onions, and oil & vinegar, the hearty Otherside Italian boasts ham, salami, capicola, pepperoni, AND prosciutto with provolone, and once you try it with that deli mustard, you can officially retire your Jersey Mike's frequent flyer card. It's safe to say Otherside Deli's slogan, "Best pastrami this side of the cosmos," is accurate.