Bigger and better from the ground up 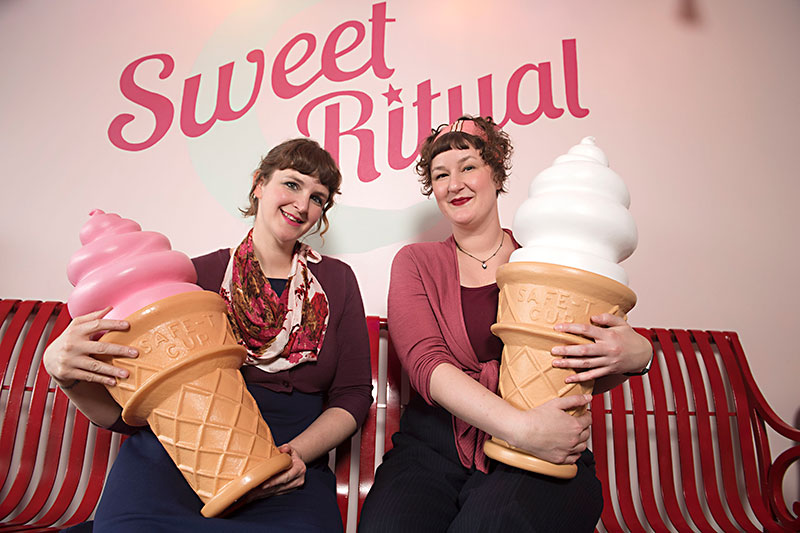 It's never a good idea to try to make a living by selling vegan ice cream, right?

That might be true in some parts of the world, even in some parts of this country, but it's not true in Austin. "Based on the sales that we had at our original location in JuiceLand," says Amelia Raley, co-owner of the newly expanded Sweet Ritual on Airport Boulevard, "we said we'd grow out of this facility in five years. But after we opened the doors, it was very clear that we'd outgrown the facility in about five weeks. So, basically, we've been planning this expansion since we started here – it just took a little while to get the financing and the real estate lined up. Yeah," she says, her smile sweeter than a coconut-milk sundae, "it's been going really well."

Raley and her business partner Valerie Ward opened their current location in June of 2016, in a former barbershop in the once-struggling Concorde Center strip mall. These days, with the Omelettry and the Soup Peddler and the newest incarnation of Toy Joy adding fresh glory to its cluster of clever shops, with the whole Airport Boule­vard revitalization plan underway, Concorde Center is no longer what you'd call struggling. And the biggest struggle for the vegan ice cream purveyors of Sweet Ritual is keeping up with clients' demand.

"This is a 1,000-square-foot space," says Raley, sitting at a table within the newly remodeled store, "and we were doing all the ice cream production, all the ice cream storage, all the dry storage, all the offices, all the retail and the wholesale parts, out of here. And our customers always said, 'We love your ice cream, but, gosh, your shop is small.' So what we did this last year, we built out a space in 4,000 square feet over on Burnet & 183, where we now have a whole ice cream production facility, including a freezer that's 500 square feet of just freezer – which is really amazing."

That might seem like overkill to supply one small shop, even for an enterprise as successful as Sweet Ritual. But the vegan goodness they create isn't exclusive to cones and dishes served at the Concorde Center location.

"We're supplying our ice cream to Bouldin Creek Cafe and Counter Culture, too," says Raley. "And we have pints at Wheatsville, and it's also served at Mother's and Citizen Eatery. And Toy Joy's Downtown location took over the cafe space next to them and opened up Yummi Joy, and they carry 12 flavors of our ice cream – it's like a mini Sweet Ritual down there!"

And the Concorde Center storefront is substantially less mini itself. "This public part of the shop is so much bigger than it used to be," says Raley, "with much more space for our customers. We worked with Lem­mo Architecture and Design – they've done a lot of the JuiceLands around town – and just a really great team of people who like us and our products. We hired a local interior designer named Sarah Stacey, and she scouted out all these cool little things for us."

Raley gestures around the long room, pointing out a few of the details. "Those lights that look like chocolate-dipped and regular cones are from a ceramicist in London," she says. "We have them set up as a kind of Insta­gram­mable moment, where you can sit on that bench beneath the lights. We took out the ceiling, and now the ceiling is high and pink, with these big, floating clouds everywhere. And Aaron Flynn painted the 20-foot mural on this wall; he looked through our Instagram and just created all these wonderful characters out of the different ice creams we've served over the years. And there's our new floor, too – it's all part of the color scheme we call Gloomy Lisa Frank." 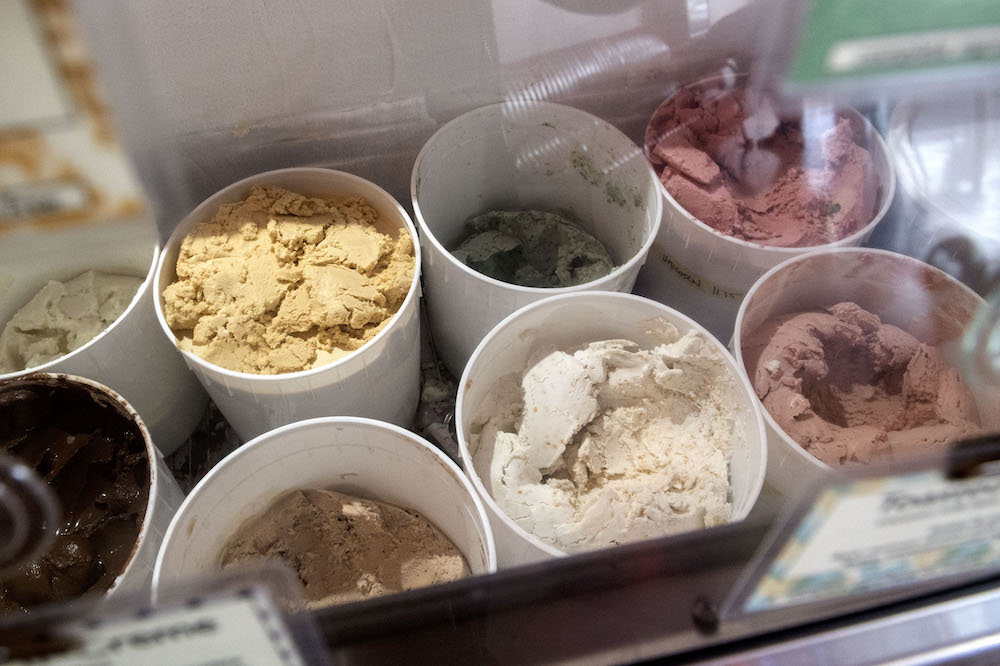 So Sweet Ritual is bigger and, from the ground up, better. But what about the culinary foundation that's even more important than the framework or any angels in the architecture? What about the ice cream? When we told you about the store's opening two years ago, we mentioned our surprise – we, all carnivorous AF and the opposite of lactose intolerant – that the stuff tasted so incredibly good. And it made us wonder why.

"I like to tell people that you get more value in vegan ice cream because plant fat coats your tongue in a different way than animal fat does," says Raley. "So, when you're eating traditional dairy ice cream, you can taste the flavors of the first couple of licks very clearly. But then, after a while, the fat kind of coats your tongue in a way that your receptors are a little bit muted. With vegan ice cream, you can taste the first lick, and you can taste the last lick. And it's not just for vegans. We have a lot of customers who have allergies, and allergy families, and we wanted to create a destination where people could come with their person who has the dietary restriction and still everyone could be very very happy with all the choices here."

Note: We're sipping on a peanut-butter shake with chocolate sauce as Raley says this, and we've just finished a tahini-based dish that sent our tongue to paradise, and we're noticing that the grout between the nearby wall's tiles is pink – even as trivial an item as grout was considered in this new phase of Sweet Ritual – and we can attest that, yes, we're very very happy with the choices here.

Concorde Center: You Could Spend Most of a Day or Night There, Now, Happy as a Hipster Clam

"Adding fresh glory to its cluster of clever shops." Did we say that about what's happened with Concorde Center, the art deco-signaged, Airport Boulevard strip mall first built in 1985? Sure, we said that – but of course the Omelettry left its longtime Burnet Road digs and moved into Concorde Center in 2015, a whole year before Sweet Ritual opened shop a couple doors down. And that beloved stalwart of Austin diner culture serves as the site's perfect eggy and caffeinated anchor, especially for the morningtime phase, while billiards-boasting club the Grand corners the plaza's nighttime market on adult bar-based pastimes (and tasty Asianesque noms via their Kitchen Window, the better to fuel your pool and pinball and foosball battles with).

Between the Omelettry and the Grand, in addition to vegan ice creams, resides another outpost of Austin's own Soup Peddler – we especially recommend their tomato basil, but you'd best leave some for us – and that All About Vapor shop with so many custom mixes of e-juice, it could make the corpse of Jules Verne raise a steampunk eyebrow. Then, step just a few yards south and there's a double whammy of funky retail brilliance, with resale bastion New Bohemia's racks and shelves of vintage treasures smack-dab against a Toy Joy emporium so roomy and chockablock with quirky diversions and gorgeous gewgaws that it outshines even the old venue on the Drag.

How things change, y'know? A decade ago, we'd drive by this strip with little more than an eye-roll and a condescending tsk to mark its presence. Now we can hardly wait to get back. And, these days, whoa, it's just the start of a long stretch of worthwhile Airport Boulevard destinations.