The restaurant within Carpenter Hotel is a conceptual ode to German, Czech, and Texan cuisines 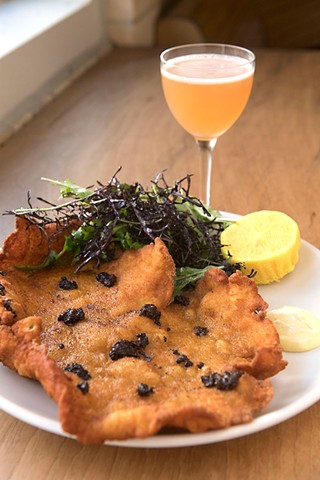 Carpenters Hall, the Carpenter Hotel's on-site restaurant, has only been open since early November 2018, but it's most definitely already one of Austin's popular kids – smart, beautiful, and almost annoyingly cool. 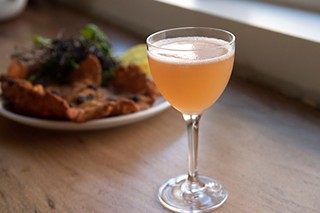 When you first walk up to this Zilker area building, at once institutional and chic, it feels a bit like attending the first day of high school when you've got the cool teacher and two buddies in homeroom and you're feeling fly in a new outfit, but you're also totally skeptical because of all the hype. Once inside, your eyes dart around the starkly whitewashed bricks, first peeping in on the lobby – complete with leather couches and an enviable vinyl collection – then to the check-in window on the right, then the steel IRL site map on the left. That "finally, a familiar face" feeling washes over, and, shoulders back, you now know exactly where to go: the beckoning and delightfully mysterious host stand, its lovely sentries poised to inform you that there's a pretty significant wait for a table. Turns out the property was the union hall building for Austin Carpenters Local 1266, a chapter of United Brotherhood of Carpenters and Joiners of America, one of the nation's largest and oldest. Hence, of course, the hotel and restaurant's name. The original building, built in 1948, now houses the new lobby, bar, restaurant, and Hot L Coffee, but hospitality one-stop shop the Mighty Union expanded the property to include a sleek outdoor seating area, the namesake 93-room boutique hotel and pool, and a half-dome outdoor party place – the Q Hut. After walking around the grounds, I thought, "Sure, there's no dramatic, happy-tears kiss to report à la When Harry Met Sally's New Year's Eve scene, but the sentiment remains: I didn't want to enjoy this place as much as I really do." Just like the property's perfect back-to-school fade, the interior of the restaurant is a stunner as well. It's almost as if Joanna Gaines suddenly embarked upon a minimalist period – floor-to-ceiling, white, subway-tile-demarcated open kitchen and all. Embracing the huge United Brotherhood and Sisterhood banners' palette, the space is streamlined with mint green paint, blonde wood bench seating and black metal-framed chairs, exposed ceiling structures, green plants in terra cotta planters, tan leather tabletops, neutral bricks, and the beautifully refurbished original hardwood gym floor (extra planks were utilized as artistic accents). The bar, which runs almost the length of the north wall, is an enormous old pecan tree slice that was removed under Austin Environmental Commission requirements.

About that bar: Let's talk food and beverages, shall we?

On a dreary Friday night, my date and I headed down for a late dinner around 8:30pm, with the fortunate foresight to call ahead ("oops, no one made a reservation"). We were informed the earliest seating was 10pm and the bar was three rows deep. I should've known, because chef Grae Nonas – the two-time James Beard Rising Star Award finalist who opened award-winning Olamaie with co-owner and Executive Chef Michael Fojtasek in 2014, left in 2016, and returned to Austin a year later – is at the helm. By the way, the cafe features breakfast tacos, pies, kolaches, and other daily pastries, a continuation of Nonas' conceptual ode to Central Texas' influences of German, Czech, and, well, Texan cuisines. Acclaimed food and beverage director Christina Skogly Knowlton (married to Bon Appetit editor Andrew Knowlton) is also on the roster. They've stacked their team for success and are, like the damn New England Patriots' Captain Brady, undeniably excellent. At any rate, we popped over to nearby Barton Springs Saloon to wait.

The dining room at night is sleek and romantic, dimly lit and intimate. My least favorite thing about this place happened at this juncture: Upon sitting down, we were told that the kitchen was about to switch to the late-night menu, a limited list of more bar-friendly bites. Our server suggested we just order everything we'd want from the normal dinner menu to squeeze 'em in before the cutoff, which was fine except we ended up with an entire table full of food all at once. Really though, this complaint is pretty much the equivalent of trying to find something wrong with Winnie Cooper or Serena van der Woodsen just because. Brown derby – bourbon, grapefruit, honey – and Manhattan firmly in hand, we lived. And thoroughly enjoyed all of the dishes.

Shrimp and lemon go together like a seamless tongue-and-groove joint (yes, I Googled woodworking terms), and the super-fat, grilled, head-on Gulf shrimp atop toasted sourdough with a bright Meyer lemon salsa was a favorite I'd return for. The seafood fritto misto (a fine-dining fried seafood platter) was lightly battered and fried just right, served with a caper remoulade that cut the fat with, well, cream. And I was pleased to find butter lettuce in the salad, because it's just the best lettuce. Back to those German roots, Nonas created a chicken schnitzel so large it literally hung over the dinner plate and topped it (brilliantly) with black garlic chimichurri. I was too full to even check out the dessert situation, but based on their pastries, I should've at least taken something delicious to go.

Carpenters Hall's brunch also brought its A-game. (Real quick: There's an online menu for everything else at this compound, except brunch?) The night vs. day aesthetic differential is startling – so much sunshine poured in that my date eventually donned his shades – but it works. My Bloody Mary accoutrements featured a pickled okra and a Castelvetrano olive, indicators of the fine-tuned details. The mimosa was fine, but $10 is just absurd. It is. And that's kind of the thing on this menu: The pricing is a bit high and unpredictable, despite being tasty overall. Still, the juicy burger on a light-as-a-feather poppy seed bun, the migas with tomatillo salsa, and the waffles with a pale purple huckleberry butter were all well-executed. The two breakout superstars were the chopped salad – a rainbow party in a bowl with salami strips, sharp white cheddar, roasted red peppers, an olive medley – and the hash brown, actually, which was served with a dollop of hot pepper jelly and a béarnaise so delicious that I sopped every last drop with those thick-cut fries.

This is not really a budget-friendly spot, per se – but if you can swing it, every bite, every sip, every can't-quite-place-it nostalgic feeling is worth its weight. 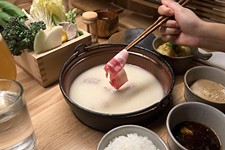