South Indian and East Texas Cuisine Come Together at Puli-Ra 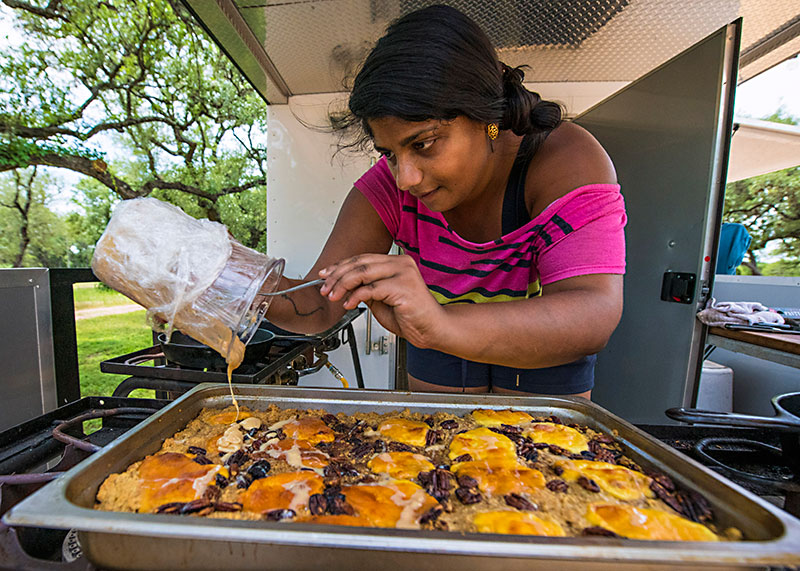 The spirit of Puli-Ra is playful and irreverent, but chef Deepa Shridhar is hardcore about her food and her supper clubs. After a fruitful food truck residency at Texas Keeper Cider, she discontinued daily service in October 2018, rang in the new year with Puli-Ra's largest event yet, and already has new pop-ups on the calendar. Shridhar shares the essence of her work, allowing us behind the scenes of a maverick small business providing a boldly experimental synthesis of South Indian and East Texas concepts to Austinites.

Though Shridhar's project has been rebranded over the years, a formative 2018 – along with a surge of new supporters – put fresh air in the sails of Puli-Ra. "I like to think of [it] as a teenager about to go to college – our ideas are wilder than most people. We just want to see what sticks to the wall, and then kind of go for it," said Shridhar. "I'm a cook's cook for sure. You asked me about quality, and how do we keep that up. I don't think you actually can with daily service. I think if you do, you can for a short spurt of time, and then you burn out. That's essentially where I realized I was going.

"I like building my own fire, I like breaking down my own animals, I like using everything local. I realized that at the pace I was going, that I was basically cutting off my timeline. So how do I make sure that every time I make a meal, I care about it like it's the first time I've made a meal? And how do I also make something focused, using certain ingredients, and being true to farmers? And I realized, I think, really, the only way I could do that was to do bomb-ass supper clubs without, you know, the twinkling Mason jar lights and all of that bullshit. I want to do something completely different."

Having weathered the years without investors ("We're definitely the brokest small business," Shridhar emphasized), her creative control over the business remains untainted. Shridhar explains how bringing on her father, DS, as a business partner helped hone her focus. "It was the biggest blessing and the biggest curse I could give myself – like we're talking 5am phone calls – but he has changed my business for the better. He is the hardest person on me, and he also keeps me accountable. If I can convince him that one of my crazy ideas is worth doing, it has forced me to think it through in a way that I hadn't been able to. I have to justify my choices."

After a self-made journey from stage to chef, Shridhar engages with her audience in a way that feels authentic to her, focusing on Instagram to reach her "really cool following" of adventurous eaters. The antithesis of formulaic, whitewashed, and aesthetically angled food marketing, her online voice (at times so vulnerable and unashamed you'd think you stumbled upon a diary) offers a refreshingly accessible glimpse into the thought, labor, and tradition behind her food. "We've been on a pepper ferment spree," she'll write, sharing swipeable step-by-steps showing baked goods rising to life, a lovingly rubbed hunk of meat before and after being smoked, and piles of local herbs and chiles becoming jars of category-bending ghees, aïolis, chutneys, and gremolatas. She also proudly credits every flower, herb, and chunk of honeycomb to its originator. "[Alejandra Rodriguez Boughton of La Flaca] and I had the very best time at the cidery," Shridhar writes. "She brought gorgeous flowers, lamb's quarters, banana leaves, herbs, coriander, lemon verbena, and much more. We burnt the banana leaves, and she showed me how to assemble a proper tamale and y'all. They are so good. We did a mix of blue corn, nixta masa, and rice (I'm South Indian – I gotta)."

Some days, Shridhar writes plainly about the evolution of her brand's identity. "Some people ask if my food is Indian and sometimes I don't know how to answer them. Is it Indian in the way they know to be Indian? No. But it's Indian for two reasons: 1. I'm Indian. 2. I see Texas onions and I char the shit out of them because char is inherently important as a flavor in Indian cooking." In another post, she offers her way of honoring a beloved role model's life. "So I had a plan – like a menu you know. But then Bourdain died. And I'm out of my mind about it. So I changed it all cause cooking is cool like that. My cheese board is everything I would serve someone like him." 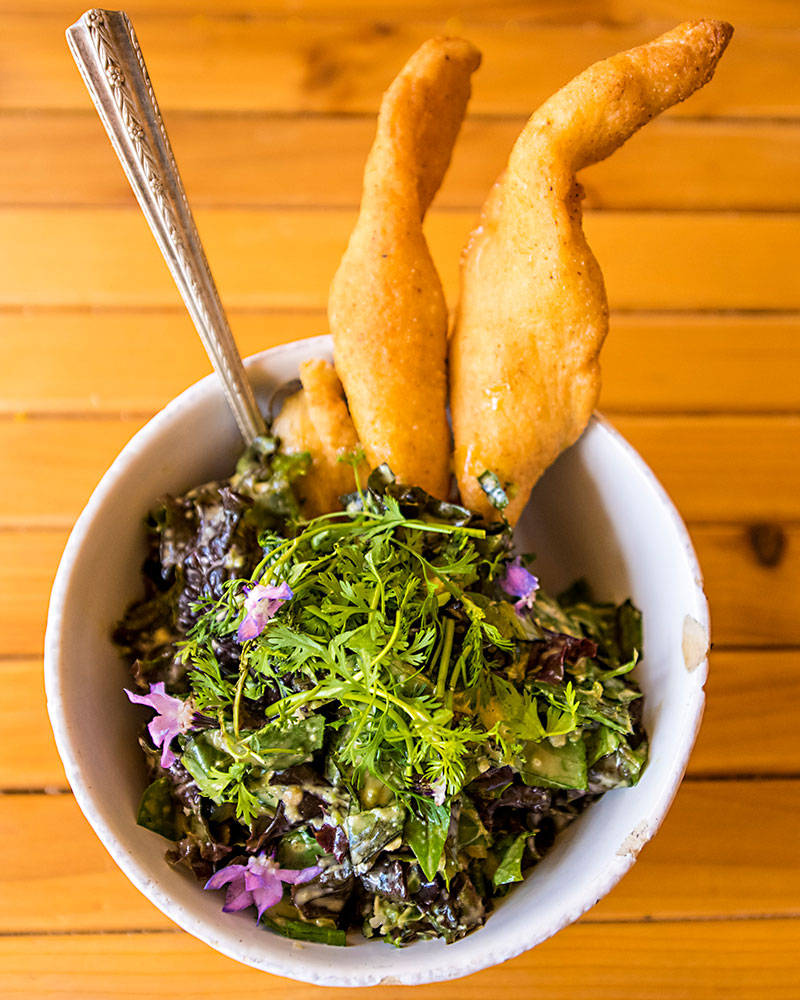 Photo by David Brendan Hall
“I’m excited to maybe build a following where you have to put your trust in a small Indian immigrant.” – Chef Deepa Shridhar

Shridhar is no stranger to small, hyperseasonal, special-menu affairs, having trained under Jesse Griffiths (Dai Due) and spent time at Lenoir before going solo. In fact, she enjoys giving guests themed feasts: a non-Christopher Columbus pop-up, Peruvian-Indian, Moghul Empire, and whole-table-as-a-charcuterie-board supper clubs. She hopes to normalize the "let's see what happens" attitude of adventurous diners who opt for a supper club meal over a brick-and-mortar restaurant meal, supporting small businesses (and their farm partners) with their dollars.

"Our supper clubs are a mixture of the experimental and the staples, because there are things that we do really well," said Shridhar. "I want to make sure that people do get some of the signature Puli-Ra stuff that they've come to know and love – it might be different pickles every time, but you're always going to get a Puli-Ra pickle. It might be different sambals, but you know you're gonna get something really spicy. It might be a different charred giant piece of meat. You know, we essentially want you to feel comfortable in knowing that there are certain tastes, basics that you can hold on to, but still, you are not in control of what is in season."

Fondly recalling dining at Eleven Madison Park in New York City, Shridhar explained that the thoughtfulness of a customized take-home gift is an element of Michelin-starred hospitality she would like to introduce to her supper clubs. Experimenting with local dairy, honey, and herb-based hair and face masks to soothe herself after long hours in front of a fire, she came up with the idea of recycling products while promoting other local businesses. "People don't understand the struggle that farmers and producers go through ... and their products are immaculate, amazing. They toil and toil over it. I really want to find a way to essentially make the public aware of how great these products are, and how good they are for you, on the outside and the inside." Playing with the idea of special granolas, ghees, and possibly even zines, she wants the "consumer-forward" experience of Puli-Ra to follow guests home in the form of a "self-care swag bag."

While expanding palates and sharing authentic South Indian flavors is important, Shridhar is primarily committed to remaining truthful as a business and as a chef. As her project intersects with the public, this sometimes means reminding guests that their preferences for taste or price won't always come first. On the subject of the occasional picky eater, she laughed: "Yes, it is going to be too spicy, and no, we can not make it less spicy for you, I'm so sorry!" It also means playing hip-hop during her events, a nod to brown cooks everywhere and her childhood soundtrack as a fresh immigrant in Houston. "I'm not out to polarize," said Shridhar, "but I am out to make food that doesn't necessarily have a voice here in Austin, and I think that's going to rub some people the wrong way.

"I'm excited to maybe build a following where you have to put your trust in a small Indian immigrant, and hopefully it will be fine, you know?" said Shridhar. "I have had to look in the mirror sometimes and think, 'Who am I gonna be?' I think it's important to constantly have that conversation, though it doesn't make you perfect. I will be the first to tell you I've made mistakes, and been stupid, but at the end of the day, I really, really, really want to be a better chef than the day before. I want to be a better person. I want to have a better company. I want to, basically, try my hardest to build something cool and great for everyone involved. I think people lose sight of that, and they get into trouble when they do – chefs treating other people badly, opening lots of chains and then those chains shutting down, a high rate of suicide and sexual harassment, all of that stuff. We refuse to acknowledge the humanity in restaurants."

On her intentions for the future, Shridhar said with a smile, "I want this brand to go as big as it can, but I want to do it in an honest way. I want there to be a reason behind expansion. I want to take on problems and take on ideas truthfully, take on business in a way that is not just based on 'Let's take over this town!' I want people to feel good about the brand Puli-Ra. I want to be the best."

Chef Shridhar's next supper club, "Hunny and Wine," will be Feb. 24 at the Austin Winery. Set to a Mariah Carey-inspired playlist, they will serve a "completely muddled" four-course menu along with the exclusive first pours of the winery's new Tempranillo. A wood-fired lamb will be the star of the show, and yes, guests can expect a little swag in their bag at the end of the night. Tickets can be purchased through the Puli-Ra Instagram account (@puli.ra). 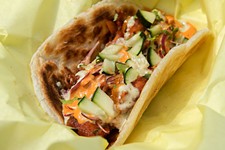 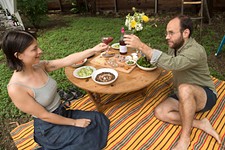 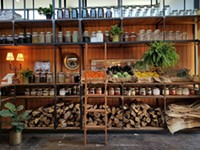