Asiana Indian Cuisine has something for every palate 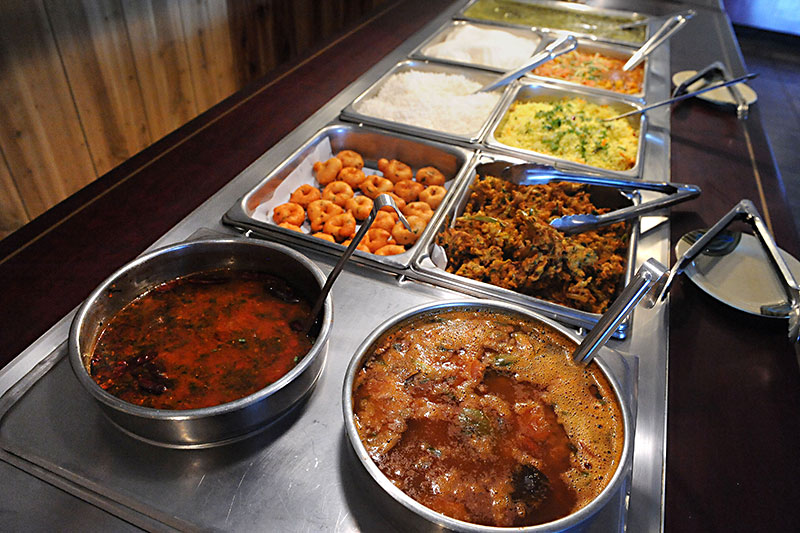 Tucked away in a South Austin strip mall, between a nail salon and a Cricket Wireless store, Asiana Indian Cuisine is never going to be mistaken for some kind of nouvelle cuisine hot spot. It appears exactly as it is: a neighborhood restaurant serving the kind of approachable South Indian cooking that offers something for every level of palate sophistication.

Asiana Indian Cuisine is a restaurant where you can take your grandmother on her birthday and delight her with their exotic approach to the familiar flavors of rice pudding. And where you can wipe the spice off the cubes of paneer in the kadai paneer and give them to your toddler to gnaw on. And where you can order takeout tikka masala on a rainy night and make all your co-workers jealous with the scent of cumin and tomatoes and warm, onion-infused meat radiating from the leftovers the next afternoon. It's a restaurant that can accommodate the needs of both your meat-obsessed father-in-law and vegetarian niece, the rare place where you can celebrate a group birthday with minimal fear of angst when the bill comes – after all, if you're getting the lunch buffet, everybody is paying the same price, no matter what they did or didn't eat. Asiana is a family restaurant, with the cheerful bootstraps attitude that label implies.

Things can get chaotic, especially around lunchtime on the weekends, when the buffet is crowded with folks getting out of church and clusters of shouting youth soccer teams celebrating their latest victory. That, of course, is part of the charm. If you're the type of person who likes white tablecloth service and a dining room free of toddlers, you're better off sticking to takeout here. But for the rest of us, it's refreshing to be able to sit down to eat somewhere so winningly unpretentious. There are few better ways to start a weekend than rolling out of bed on a Saturday around noon and heading to Asiana for a vat of headache-dispelling chana masala and some garlic naan.

The menu, as you might expect, is a sort of greatest hits assemblage of the most popular Americanized Indian dishes, the culinary equivalent of a Traveling Wilburys album. The tandoori chicken is bright red and butter-tender, with the meaty heft of the charred flesh balanced out by a tangle of barely cooked sweet, white onions. For a dish that's often cursed to be dried to a chewy, wood-chip texture by the heat of the clay oven it's cooked in, Asiana's version is impressively moist, retaining a slight tanginess from the yogurt that marinated the meat. The saag paneer's cheese cubes have a nice elastic bounce, the perfect foil to the creamy blanket of pureed spinach and onion that they float in, with a mild spiciness that cuts through the fat, like a dressed-up version of the creamed spinach that used to be de rigueur in every high-class steakhouse. And the butter chicken is impossibly soft, pillowy meat absorbing the pool of creamy, buttery tomato sauce that tastes almost like a smokier penne alla vodka, the perfect accompaniment to their fresh-cooked, crispy-edged naan, whose spongy interior makes the ideal tool for sopping up all these saucy plates.

There are a few quirks here – dishes that, while less familiar within the classic Americanized South Indian repertoire, embody the same spirit: indulgently layered, slow-cooked, and sweet, redolent of spices and cream. There's the perennially popular cauliflower 65 (also available in a chicken iteration) – a sort of South Indian take on kung pao cauliflower, breaded and fried and served in a spicy sauce – or the Indian spring rolls, apparently modeled on a Kolkata street food classic. While there are opportunities to expand your understanding of South Indian cuisine, there's nothing here that could threaten even the most cautious culinary sensibility. Asiana is a restaurant that takes your hand and gently guides diners through very bold flavors.

But the real star of any Asiana experience is the buffet. The food here is almost beside the point, although it's good – the same menu as dinner rolled out with unfailing plentitude and variety. If they run out of one dish, they might replace it with more of the same, or something entirely different might appear. The lunch buffet is a place to experience the lessons of nonattachment and discernment. There is no point in getting obsessed about whether the aloo gobi will run out, or whether, this time, there will be an appearance of the mythical tandoori buffalo wings, often whispered about but seldom seen, the Loch Ness monster of the steam tray. And that woman, elbowing in front of you to snap up the last piece of creamy chicken korma? A fellow sufferer, doing her best to fulfill her bodily desires while she briefly occupies this bright and shining plane of existence. After enough creamy calories, you'll find yourself floating on a certain indulgent cloud of kindness, reinforced by a serving of the fabulous mango mousse.

There's a particular comfort in the abundance of a well-constructed buffet that you can't really get with any other kind of restaurant. This is, I think, why buffets are a part of the childhood experience of most of the Americans I know. The promise of America is a promise of abundance. It should be a promise that you will never be turned away, that you can fill your plate as many times as you need to, eat whatever combination of weird flavors satisfies the murmurings of your soul without fear of surveillance or judgment. A buffet is the closest you can get as an adult to the experience of eating as a child – that endless abundance, food appearing magically before you without any visible sweat or effort, like magic, like a gift. And in a time of year when the responsibilities of adulthood loom in the form of post-holiday malaise and New Year's resolutions – when we could all use a return to our child selves – Asiana is a restaurant that feels like home.

A version of this article appeared in print on January 4, 2019 with the headline: Far Flung Correspondence: Asiana Indian Cuisine