Cooking the Whole Pig at Banger's

Move over beef, there’s a new barbecue meat in town 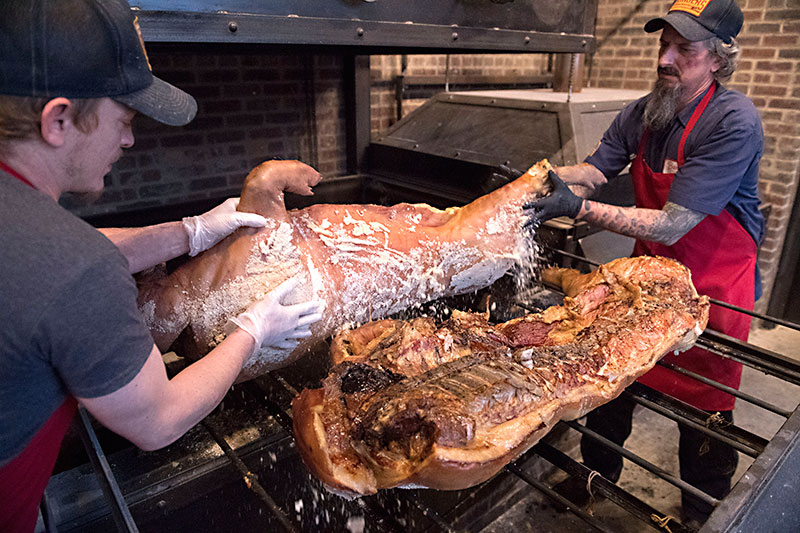 In Texas, barbecue is synonymous with beef, but the word translates differently in other parts of the country.

"Where I come from, barbecue means pig," says Ted Prater, the Tennessee-born executive chef and pitmaster of Banger's Sausage House & Beer Garden. The Rainey Street biergarten best known for its triple-digit taps and exotic sausages has been cooking whole hogs for special events for years, but this month they've taken it to the next level. In addition to expanding their footprint to the neighboring lot (expect 100 more taps!), they've built a deluxe smokehouse on the patio dedicated to the art of whole hog cooking.

In many ways, the smokehouse is a culmination of Prater's personal history. He's the type of guy that refers to chickens as "yardbirds," a hunter and fisher with a scraggly goatee that's been burned off more than once over an open fire. When it comes to proteins, he doesn't discriminate. "If it has a face, I'm going to cook it," says Prater, who's roasted everything from nutria to whole alligator.

It's easy to judge a chef by their facial hair, but don't let Prater's looks fool you – he's also schooled in a very un-country style of cooking. He entered the restaurant industry at 14, then worked under fine-dining pioneers in Nashville to become the chef/owner of a restaurant by age 28, trailblazing on the east side of the city before it was a hotbed of hipsters and bachelorettes. Six years ago, he moved to Austin for a fresh start and landed at Banger's, designing their menu and quietly plotting a regional barbecue invasion the likes of which Austin has never seen.

"We take it very serious. This is what I've wanted to do my whole life, to cook whole animals and honor the pig. When it comes down to it, I'm a Tennessee boy. This is what barbecue is to me: pulled pork," says Prater.

Sure, pork ribs make up one third of the Texas trinity, and most pitmasters do offer pulled pork, but literally no one in town cooks whole hogs except on special occasions.

Sure, pork ribs make up one third of the Texas trinity and most pitmasters do offer pulled pork (look for it at the bottom of the menu), but literally no one in town cooks whole hogs except on special occasions. Step inside their smokehouse and it's immediately clear why. Trailers simply don't have the real estate required to cook an 180-pound Duroc hog. First off, you need wood – a lot of it. Banger's is going through a cord of wood a night, which translates to a 4-by-16-foot pile that wraps around the patio like a splintery snake. Those logs are burned down to coals in a burn barrel in order to create a cleaner and less smoky heat source. A walk-in fridge is required for hanging the hogs. And that's before cooking even begins.

Banger's boasts two dedicated pits for the pork, inspired by Prater's childhood cement block smokers outfitted with exhaust stacks mimicking those of South Carolina legend Rodney Scott. One cooks Tennessee-style pulled pork, which receives a few squeezes of "pull juice" (apple cider, sugar, paprika) to cut the fat before serving in tender, sinewy strands. The second smoker is for Carolina-style chopped pork, which receives splashes of vinegar-heavy "firewater." It's served on a Martin's potato roll with stripes of mustard sauce and some finely chopped chicharrones for crunch ("like Doritos on a peanut butter sandwich").

Whereas most Texas pitmasters sell out of meat by early afternoon, that likely won't happen at Banger's. They'll be cooking enough pork to make a doomsday prepper. My pork math is lousy, but Prater's rough equation involves 180-pound hogs, 45% cooking loss, 1-pound plates of pulled pork, 8-ounce sandwiches, and a seating capacity of 500. Once they're firing on all cylinders, that'll equal two hogs per day and a small army of pork converts.

After touring the pits and receiving a Wikipedia-worthy synopsis of regional barbecue styles, Prater prepped me a plate. The pulled pork was my favorite, with the sweetness of the meat amplifying its tenderness. Most friends of mine know my body rejects mustard on sight, but I closed my eyes and bit into the chopped sandwich, focusing on the salty crunch of pork skin and subtle vinegar flavors. Despite my prejudice against yellow condiments, I went back for more.

In addition to the pork, the tray featured perhaps the most underrated meat in the barbecue canon: turkey. Soft as a Thanks­giving nap with a tang of sweet-tea brine, it's on par with the best in town. The creamy and spicy jalapeño-cheddar sausage was another star, part of what built the Banger's empire in the first place. Then there were the sides. Studs of pineapple kept the baked beans interesting, 10-day ham hocks punched up the collard greens, and a steaming sweet potato acted like a bowl for a pool of buttery bits of bacon. The sweet Southern slaw is powered by Duke's mayo and run through a meat grinder for a fine texture. I'd already been sleepwalking through my day, so I opted out of beer in favor of Carolina's version of Dr Pepper Cherry, Cheerwine.

I was so impressed with the whole hog situation that I didn't even notice that there wasn't a bite of beef on the plate.

A version of this article appeared in print on December 21, 2018 with the headline: In Praise of Pork 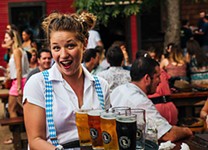 The Best of Oktoberfest
Six local picks for celebrating pretzels, brats, and beer

Sausage Fest
Banger's does brats right, but it's the more adventurous menu items that really sing