A First Look at Sway in West Lake Hills 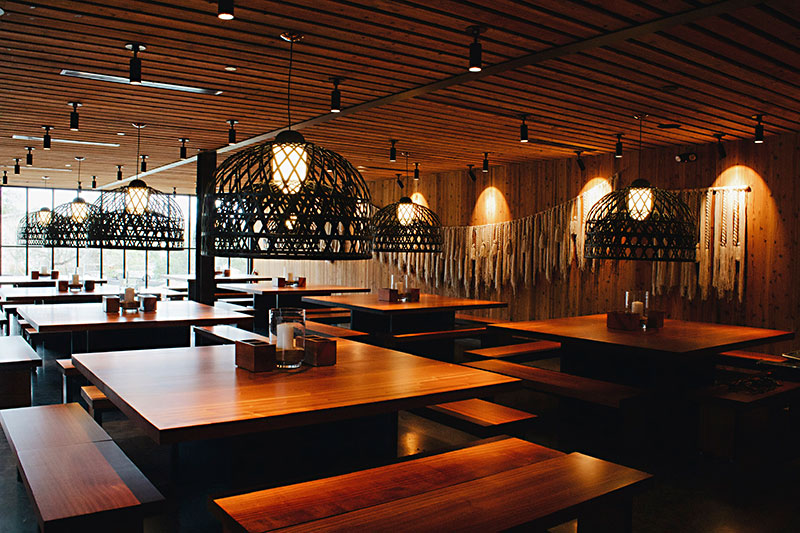 Six years later and now with a third location, New Waterloo's modern Thai restaurant Sway is well on its way to building an empire, all under its neon lotus flower sigil.

The folks out in West Lake Hills received an early holiday bonus: The new Sway, right there on Bee Caves Road, opened to the public for dinner service (and happy hour) on Dec. 5. The overall design – by Michael Hsu Office of Architecture; Föda Art Director Dale Wallain, New Waterloo Design Director Melanie Raines, and a slew of others also played major roles – is a prime example of the increasing importance of spatial aesthetics in restaurants. It's sleek and chic, but it's also warm and cozy despite being an enormous two-story building with hard lines and concrete angles. Sway's interior allows the physical space to stand as its own formidable character without overshadowing what guests really came for: the food.

Still focused on communal dining, with large square tables and four-sided bench seating, this location is accented with light. It also maintains the brand's signature dark and moody minimalism, using off-white macramé wall hangings and two-tone white pillows to contrast the bold black light fixtures, rich wood, and teal vertical subway tiles from the stainless steel open kitchen. The core visual of the restaurant is the big, bold, light-filled stairwell connecting to the giant rooftop bar, which frames one of the city's best views of the Downtown skyline. Large oak trees shade another outside seating area at the downstairs entrance.

Back to the star of the show, the food. Now under the helm of Corporate Executive Chef Charles Schlienger (chef Rene Ortiz, who opened Sway in 2013, is now linked to several more acclaimed restaurants), the updated menu still features fan favorites like the Son in Law – crispy farm egg, braised pork shoulder, thick soy, and pineapple over sticky jasmine rice, topped with nahm prik pla sauce (a dish this bromelain-allergy-afflicted human won't have the pleasure of trying). Other magical recipes sure to sear themselves into your brain are the blue prawn tom yum; chicken wings coated with a spicy caramelized ginger chili sauce; the soft-shell crab with chili nahm jim and Brussels; and of course, because we are in Austin, the Jungle curry with Wagyu brisket and red chili coconut cream. (Lunch and brunch are reportedly coming soon.)

We'd be remiss to leave out the drink program, which in itself is reason to visit that rooftop. Our favorite, the monk water – vodka, watermelon, lime, cucumber, mint, cilantro, soda water – is served in a tall glass with tons of crushed ice (you could bring your own straw ...). Refreshing and bright, it's a delightful accompaniment to any of the flavor-loaded dishes that we've come to expect and crave from this Austin original.

As an aside, you've still got a few more days to try the Year 6 menu at the O.G. South First location. Featuring items like the crispy soft-shell crab and hanger steak with Thai herbs, lime, fresno, crunchy noodles, and toasted coconut, the special dinner service (available 5pm-close) ends Dec. 16. 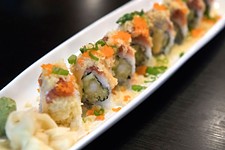