Living Off the Land With Local Leaf 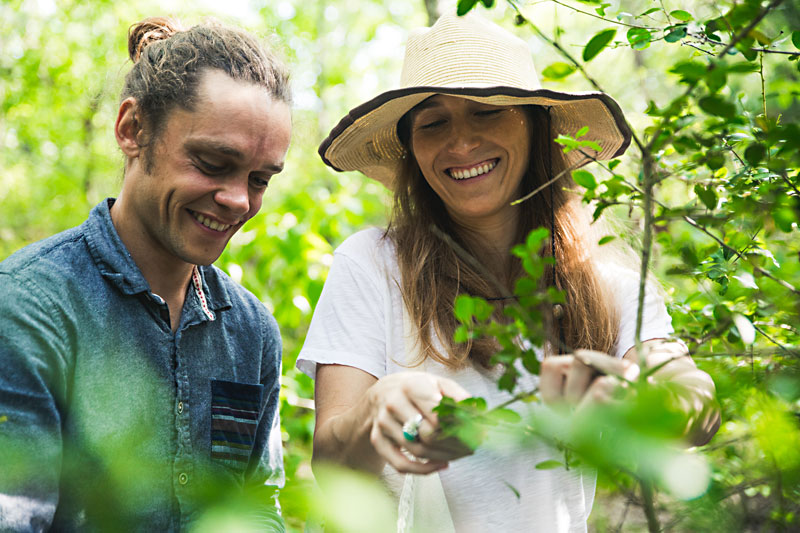 Through the years, we've been led to believe that money doesn't grow on trees. But Eric Knight and Stacy Coplin prove that old adage wrong each week when they forage yaupon, the only caffeinated beverage native to North America. Yaupon is a species of holly related to yerba maté and, when the leaves are dried and cold-brewed, it results in a similarly earthy, grassy tea that is naturally high in antioxidants, polyphenols, and anti-inflammatory flavonoids.

"If you look out, pretty much 90% of the stuff you're seeing is yaupon," Knight said on a recent edible plant walk in Bastrop, gesturing out into the forest. "It's the dominant shrub, especially east of town; there's no way to overharvest it [as long as it’s sustainably hand-harvested*]."

Knight discovered the plant, found throughout in the Southeast and as far north as Dallas, when he began to immerse himself in the world of botany while studying environmental engineering at UT.

"Toward the end of college, I started to get really into primitive and survival skills," he says. "I started learning about plants and found out that's what I was really passionate about."

After graduating, Knight moved to Oregon for six months. He steeped himself in field guides and began learning from other foragers before moving back to Austin and taking classes at the Wildflower School of Botanical Medicine.

He started working at Earth Native Wil­der­ness School, teaching both kids and adults survival skills (like how to build a fire and identify wilderness medicine), and led similar classes and edible plant walks at the Austin Nature & Science Center. It was there that he met Cop­lin, who was running the center's natural­ist workshop after returning from college in Colorado and leading environmental education experiences in the Everglades, on the East Coast, and in Dallas.

(Serendipitous side note: It turns out both native Austinites attended the same elementary, middle, and high schools – and even had some mutual friends – yet somehow hadn't connected until this point!)

"When Stacy and I started dating, I was telling her about some of the stuff I harvest and yaupon came up," recalls Knight. "I mentioned that it was caffeinated and we had this idea that maybe we could start a yaupon business."

In 2012, they met with lawyers and accountants and began to dive headfirst into perfecting a recipe and forming a business plan. "But we'd just started dating," says Coplin. "And Eric is an engineer and has a certain temperament – like he wouldn't take breaks."

"I get kind of obsessed," Knight admits.

They decided to table the idea for the time being, putting their equipment into storage and moving it with them over the next several years. During this time, Knight secured a job as an environmental engineer and the two got married and bought a house. In 2016, they decided to launch Local Leaf, a company founded on products made sustainably: wild-harvested plants.

“I want us to have deep roots and big branches and really do it right,” says Coplin. “So yaupon’s just the first thing and we have some other ideas in the works.”

"I want us to have deep roots and big branches and really do it right," says Coplin. "The name Local Leaf works because it can be long-term and [refer to] many things. So yaupon's just the first thing and we have some other ideas in the works."

Each week, the duo hand-harvests two pillowcase-sized sacks of leaves around the Austin area. They strip the shiny, leathery leaves from their branches – only taking 20% from each plant – and the leaves grow back immediately. Their process involves drying half to make a brighter "green" expression and roasting the other half for a more maté-like "toasted" expression. They cold-brew and bottle the two variations, selling them on Wednesdays and Sundays at the Texas Farmers' Market at Mueller. The sugar-free, additive-free tea can also be found at Royal Blue Grocery, as well as restaurants like Casa de Luz, Curcuma, and Bento Picnic.

This fall, Local Leaf was invited to take part in the first-ever Yaupon Symposium, put on by the American Yaupon Association, a board started by the Florida-based Yaupon Brothers. The event took place at the Central Library on October 17.

"I think Austin is going to be the center of it all because it's the most food-centric city with yaupon in it," explains Knight.

On connecting with Cat Spring Yaupon, the first Austin company to bring the tea leaves to market, Coplin says, "They had a ton of work to do as far as educating people. [It's] cool to meet the people who set the groundwork for what we're doing. Yaupon is still so new, anyone who's doing it and putting the word out is good news for all of us."

Even with a full-time engineering career and a growing business (which Coplin focuses on full time), Knight finds the time to lead edible plant walks for both the Lady Bird Johnson Wildflower Center and for Local Leaf (dates are listed on their website). During these sessions, he guides small groups through some of his favorite parks, pointing out edible native plants like wood sorrel, hackberry, Turk's cap, sumac, cedar elm, mustang grapes, beautyberry, juniper – and yaupon, of course.

"The plant walks get people outside and excited about what's already there," says Coplin. "And then they can share that knowledge with other people, too."

But what's to stop anyone from harvesting and brewing their own yaupon once they know how to spot it?

"We have some proprietary stuff we do so people can't exactly replicate our tea," says Knight. "But I'd rather have people using it because that's the whole point. We're excited about it because it's a local source of caffeine and theobromine. So whether it's the other yaupon companies that people like, or ours, or if they want to harvest their own, I think it's all better than importing something."

[*Editor's Note: We added an addendum to clarify the statement.]
A version of this article appeared in print on October 19, 2018 with the headline: Wild, Wild Life