The Best of Oktoberfest Halloween gets all the glory when it comes to October celebrations. But can't we all agree that it might be time to mix it up a little, especially when it comes to the culinary side of things? Halloween isn't exactly a great food holiday, and there are really only so many fun-size Snickers a person can eat without experiencing the painful adult version of a sugar crash. Fortunately for those of us with less-developed sweet tooths, October is also the time when we celebrate Oktober­fest, a monthlong bonanza of all things savory, from pretzels and brats to vats of bier. Here are our favorite places to chow down and celebrate the reason for the season.

The weekend of October 20-21 kicks off the 17th annual Oktoberfest at NXNW, the kind of chaotically all-in beer and sausage fest that embodies the spirit of Oktoberfest excess to a T. Alongside the award-winning brews on tap and plenty of traditional German food, the celebrations feature artisan craft booths, face painting, live music from the TubaMeisters, the Oompahs, and the Seven Dutchmen Orchestra. But what really makes the event stand out is a series of contests: brat eating, beer stein lifting, and not one, but two dog costume contests (one for wiener dogs; one open to all breeds), promising to enliven your Instagram stories beyond belief. While the event is free, a suggested $2 donation at the door goes to benefit Texas Oncology Massage Alliance, and the Central Texas Dachshund Rescue.

Oktoberfest at the German-Texan Heritage Society

While their claim to being second-only to the famous celebrations in Munich might not stand up to scrutiny, the German-Texan Heritage Society certainly brings the most authentic Oktoberfest game in town. On October 13, guests can swing by the society's historic headquarters for a daylong celebration of German-Texan history and heritage, including live traditional German music, German food and beer, and, the Society promises, plenty of gemütlichkeit, the German w ord describing the sense of belonging and well-being springing from a sense of acceptance.

Somewhat surprising to non-native Austinites, the German-Texan Heritage Society isn’t the only German-Texan heritage game in town. There’s also the Saengerrunde, which was established in 1852 as a German singing group. These folks still know to throw a heck of a musically oriented party in their delightful dance hall/bowling alley venue. And yes, there will be singing, with a choir concert from both the men's and women's choirs featured at the event. Slightly more informal than other celebrations in town, guests at the Saengerrunde Oktoberfest are invited to bring an appetizer or dessert to the October 20 event, and can even volunteer to come early and cook.

Of course Austin's most popular beer hall hosts a killer Oktoberfest! From October 18-20, anyone hardy enough to brave the inevitable crowds will be rewarded with three days of oom-pah bands, traditional costume (break out those lederhosen!), German beer, and a special Oktoberfest menu including spaetzle, potato cakes with homemade applesauce, sauerkraut-and-bacon stuffed schnitzel, and, because it's Banger's, house-made weisswurst poached in beef broth and served with a side of spicy mustard. On top of boasting the largest taproom in Austin, there will be free Live Oak Oaktoberfest on Saturday until it runs out, and of course, both a stein hoist and a brat eating contest.

Hanging around an Irish pub might not be your first idea for Oktober­festiv­ities, but there are certain undeniable cultural culinary similarities (mostly an enviable dedication to potatoes) that make the crossover logical. And at Jack & Ginger's you can party for a good cause with all sales of the special Oktoberfest food and beer benefiting Austin Pets Alive! There will be live music, stein hoisting competitions, and a bratwurst eating contest, all day long on Saturday, Oct. 20.

Tapping of the Keg at Krause's Biergarten + Cafe

With its long wooden tables and minimalist decor, Krause's Biergarten hosts a traditionally bare-bones celebration with one goal in mind: for each guest to eat as many bratwursts and drink as many beers as humanly possible. Enter their bratwurst eating competition for a chance to win $100, and, more importantly, witness the unique blend of disgust and pride that will flash across your friends' faces as you greasily proclaim yourself the sausage king/queen of the greater Austin area.

[Editor's Note: We have updated the story to reflect event changes.] 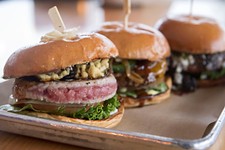