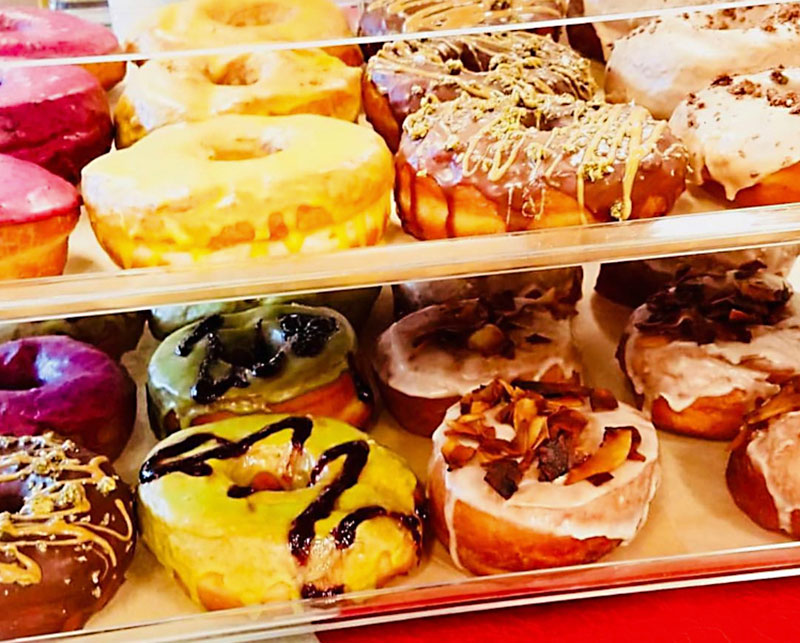 Awakened Bean, a small Austin roasting company that launched this year, will deliver mantra-infused coffee beans and vegan donuts laced with superfoods right to your door. For free. Owners Kendall Krishna and Holly Thomas created a breakfast they believe in.

The company started after the pair moved to Austin in a conversion van from Northern Virginia, not entirely sure of where they would end up or what they'd do when they arrived. Around mid-Oklahoma they had an epiphany: coffee roasting. With Krishna's small-business experience and Thomas' years in coffee retail, it just made sense.

They knew right away this venture would have to mesh with their values and beliefs or it wouldn't work. The beans needed to be consciously sourced, roasted to order, and single origin. And they wanted their customers to be more than awake; they wanted them woke. That means they do things a little differently around the roaster. During roasting, they chant sacred mantras and the beans are cooled over energizing crystals. They're keeping mindfulness at the forefront and putting positive vibes and intentions into every roasted-to-order batch, and their tagline is "May all beings be awakened."

"By infusing these energies in the donuts and the coffee, it's a way to bring that to fruition," Krishna said. "We want to share that love, that good energy, with other people," Thomas agreed.

“The superfood gives you the nourishment your body craves and guilty pleasure in the same bite, because, let’s face it, it’s still a donut – vegan, superfood, or not.”

Have a specific mantra or intention for the week? Type it into the online order form and the duo will infuse the beans with custom positivity. It's what they love most about what they do. Customers have shared stories of breakups, important work deadlines, and life milestones and Krishna and Thomas get to mindfully infuse specific, positive intentions into each order.

"It felt really good to be able to offer that," Krishna said, adding that the whole process was heartwarming, making him feel connected to their customers. They're the first to admit that this doesn't give the coffee any kind of metaphysical superpowers, but there's certainly something empowering in the whole process for those who are conscious of it.

"Whatever intention we put in something, these energies extend into our products. You have to be open to them," Krishna said. It's like a spiritual connection, a peace of mind, knowing as you drink each cup that someone was thinking specifically of you and wishing you the best as they prepared it. While the original intention was to focus on coffee, vegan superfood donuts, like most inventions, were born of necessity.

The couple found themselves at home with a new baby one morning, craving vegan donuts, but uninterested in loading up and heading into town. No one was willing to deliver them to North Austin, so Thomas tried to whip up a batch herself. Half a dozen attempts later, she found the magic recipe: one for a light and fluffy yeast donut that satisfies every craving, and looked good doing it with its brightly colored glazes made from vibrant superfoods. Krishna's reaction, and just about anyone who tried the sample batches, was overwhelmingly positive.

"The superfood gives you the nourishment your body craves and guilty pleasure in the same bite," Krishna said. Because, let's face it, it's still a donut – vegan, superfood, or not.

They started selling the donuts topped with ingredients like matcha, turmeric, MCT oil, and Blue Majik on their website in July. Now you can find the donuts in several retail locations, including the Four Five, Thom's Market, Rabbit Food Grocery, Bouldin Creek Cafe, and NadaMoo. They are also aiming to become regulars at farmers' markets around town, which will help them connect on a personal level with the people indulging in their sweet treats, which is what they've wanted all along.

Expect to pay a bit more than your typical box of ODB's from Voodoo ($4-5 per donut or $39.99 for a dozen, delivered), but you can feel a lot better about stuffing your face with them – physically and spiritually. And if you think you might need a donut fix once a month (or once a week – no judgment) for the foreseeable future, Krishna and Thomas are working on a subscription program for their donuts and coffee. And yes, they'll deliver to any address in the city of Austin, no charge. That goes for Thomas' favorite, the matcha-coconut with blackberry chia seed drizzle, and Krishna's, the maple coconut bacon, plus a dark roast Colombian coffee to wash it all down.

A version of this article appeared in print on October 5, 2018 with the headline: Awakened Bean