If you think about it, the Brewer's Table encapsulates Austin in a nutshell. Just a block east of Springdale Road on East Fifth Street, the restaurant and brewery is housed in a sleekly refurbished Quonset hut set off from the street and hidden behind a tasteful bamboo fence in the Govalle neighborhood. Inside, herbs hang upside down from the ceiling, dangling above jars full of pickled vegetables, a nod to the ethos of sustainability held by the leadership team of founder Jake Maddux, executive chef Zach Hunter, and head brewer Drew Durish. A quote from Charles Bukowski's Love Is a Dog From Hell overlooks the dining room: "Stay with the beer. Beer is continuous blood. A continuous lover." Indeed, beer shapes the culinary discourse here, with ingredients moving back and forth from brew space to kitchen, including barley and yeast and herbs and malt. In this historic area settled by a Swedish cattle rancher and, until recently, home to many low-income folks, the Brewer's Table is an innovative restaurant indicative of where the Austin food scene has been and is going, while also serving as the latest example of formidable change into the Eastside. 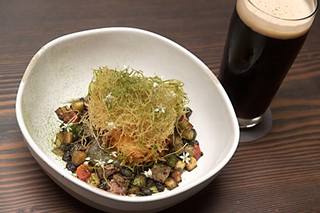 It was into this complicated miasma of gentrification and history that we wandered in for Sunday brunch, our large party seated at an equally sizable round bar table adjacent to the open kitchen. This afforded us a view of the wood-fired oven, which was pretty entertaining for the younger members of our party. Our starters of deviled eggs were an exercise in umami and iron, stuffed with chicken liver mousse and topped with egg yolk jam. I preferred the salty comfort of the pretzel croissant, which sang when the accompanying cherry mostarda was applied. The fried shrimp tacos were among the entrée standouts; tiny but satisfying, the fermented cabbage slaw and sweet corn mayo marrying for a vaguely Asian flavor profile. The real showstoppers, though, were the banana pancakes: two enormous, plate-gobbling fluffy cakes that aren't super-sweet on their own, but when dressed with mesquite maple syrup are a one-way ticket to nirvana. When we returned for dinner a few weeks later, I was very keen to try the hearth bread with mesquite butter, knowing that Sandeep Gyawali of Miche Bread had developed the restaurant's bread program, including the mesquite components. I was not disappointed, and had to force myself to stop hoovering the precious slices slathered in honey-sweet butter. I'm glad I stopped myself, though, because that night I had one of the most exquisite dinners I've had in recent memory. My friend and I opted for the Gulf shareable feast, which featured a generous fillet of rich, pan-seared grouper and equally generous portions of grilled shishito peppers, a turnip and greens salad, and a summer watermelon dish that somehow turned cubes of unremarkable watermelon, cantaloupe, and honeydew into juicy, candylike jewels. Meanwhile, our husbands opted for smoked rabbit carnitas with Bloody Butcher corn tortillas and aged pork ribs served with yeast pickles on the side. They were both fine, but couldn't hold a candle to the fish. For dessert, we tried the ice cream cone, a tiny, two-bite treat featuring all the ingredients of beer. My favorite part was the yeast caramel at the bottom of the cone. The whipped chocolate mousse was tasty, but there were rogue bits of hazelnut that added a jarringly bitter bite to the otherwise not-too-sweet concoction. My husband's sweet corn custard was subtly flavored and worked well with the hopped melon sorbet that came with it, but the dish could have used a bit of editing, as the chia seeds and tapioca pearls that adorned it were just a bit too extra for what would have otherwise been a lovely, simple dessert. Our paloma and Just Peachy cocktails were delightful and refreshing, but I had to send back the Saison D'etre because it was too much like grandma's perfume for my tastes. The beer drinkers at the table enjoyed the Common Lager and the Vor Ort from the house beer menu, but opted to order from the 26-deep guest taps menu for the rest of our visit.

A note about the seating options: Due to an oversight on my part while making reservations, we wound up seated outside for dinner, much to my chagrin as it was 97 degrees outside and I don't like to sweat while I eat. The misting fans made things more comfortable though, and as the sun went down, the heat became less of an issue. However, whenever the wind shifted during the course of our meal, we got a snootful of eau de sewage, which ... well, I don't see myself ever dining on this patio on purpose.

I met up with some girlfriends for lunch for my final visit to the Brewer's Table. This was probably the least wow-inducing visit for me. My friend's burger, two patties stacked with powerful raclette cheese and studded with the house yeast pickles, was tasty, if a little greasy. A couple of lettuce leaves might have helped to cut the fat a bit. My other companion opted for the summer vegetable sandwich, which was fine – light on the tummy and also perhaps in flavor. But it was the pastrami board that filled me with near-instant regret. I'd ordered it because I was intrigued by the promise of beet pastrami (and more of that amazing bread); I'm not sure what I was expecting from that, but what I got was beet-flavored salt jerky. I can't even remember what the actual beef pastrami tasted like because the salted beet leather is seared on my memory like those black spots on your vision after you look directly at the sun. I wish that weren't my last experience of this restaurant before writing this review, because the two meals preceding it were so memorably excellent.

But, like Austin itself, it's often easier to remember the things that you dislike – traffic, gentrification – more intensely than the things you love, like the truly wonderful dining experiences hiding in the places you least expect it. It does give me pause, though, when I think about where the Brewer's Table fits into the broader discourse around Austin's identity in 2018 and beyond. A blog entry written in February by founder Jake Maddux claims a commitment to community via engaging local charities and sourcing from local farms. But at a restaurant where dinner for four costs nearly $300, the limits to that engagement seem pretty clear.