Tacos of Texas Takes Cultural Exploration to the Screen

Episodes feature one taco and one Texas city Mando Rayo's friendly voice fizzes out of the phone speaker. His writing partner and longtime friend, Jarod Neece, laughs in the background. The pair are in Corpus Christi filming an episode of their new web series, a seven-episode trek through the iconic tacos of the state – Austin, San Antonio, El Paso, Brownsville, Houston, Corpus Christi, and Dallas. Tacos of Texas comes courtesy of Indie Lens Storycast, a YouTube channel for indie filmmakers, in partnership with PBS Digital Studios.

Every episode features one taco for Rayo and Neece to explore. It's the next evolution of a mission the duo set out on more than a decade ago when they started writing about tacos for a local audience.

In Austin, it's the migas taco. What else would they cover in San Antonio besides the puffy tacos? Where they sit in Corpus is the hotbed of Texas breakfast tacos. Rayo explains that the oil refinery workers, descending on restaurants before work in the early morning hours, are partially responsible for the phenomenon.

The day before, the two visited Chacho's Tacos to sample the "biggest and baddest" breakfast taco you've ever seen: three and a half pounds, 14-inch tortilla. Did they finish it?

"No!" Rayo exclaims. "We tasted it. We passed on the free T-shirts."

Chacho's Tacos is just one leg of the Corpus trip. This morning they're headed to a taco brunch with different local creatives and chefs to discuss the intersection of food, art, and culture in the region. "The conversation around this culture and this food tradition, how they kind of personify that in their work," Rayo explains. "But as well as what does it mean when somebody else does it in a way that kind of steals the culture?"

That theme is a credit to the creative direction of PBS, which stressed that beyond just food, it would like to see Rayo and Neece delve into the people and the relationships behind the plates.

The pair's friendship itself serves as the foundation of Tacos of Texas. Neece tells the story over street tacos at Vaquero Taquero on Duval Street, as Rayo returns to correct a small mix-up at the counter. He's allergic to avocado, something that Neece says makes their work interesting. "It's kind of a taste test with all the green salsas," he quips. (We think the allergy should immediately bar him from the Society of Professional Taco Journalists, but whatever, we don't make the rules here. "I know, I know," Rayo says mournfully. "It is my kryptonite.")

Anyway, Neece recounts how the two met, years before they ever started writing about tacos together. About 12 years ago (maybe more, the cohorts can't remember exactly), Rayo hosted a Tito's Vodka-themed house party where Neece was a guest. There the two formed a friendship that would serve as the basis for their eventual meeting of the minds on the Tacos of Texas blog. Tacos of Texas film crew in the Rio Grande Valley: (l-r) Chase McDaniel, Robert Gomez, Nicholas Worthen, Gerald Flores, Jarod Neece, Mando Rayo & Dennis Burnett. (Photo by Robert Gomez)
“For me, food is representative of the culture, so if you’re going to do it, do it right.” – Mando Rayo

Around 2006 or thereabouts, Neece and Rayo started their "Taco Journalism" blog, reviewing local taco joints and putting together a small archive, inspired by Los Angeles based El Bandini and his Great Taco Hunt, one of the first taco-centric blogs. One day, scouring the newly forming blogosphere, Neece came upon the Austinist and a listicle dishing the five hottest taco spots in town. He homed in on the name, wondering who was doing their own version of taco journalism right there in town. It was Rayo. "I said, 'Mando, what the hell are you doing giving this shit away for free?'"

The two began to build their taco blog which grew so popular it led to two books: 2013's Austin Breakfast Tacos, and 2016's The Tacos of Texas. Rayo believes the work separates itself from the competition – there are many aspiring taco correspondents out there now – because he serves as more of a bridge between the chef and audience than the average writer. Mom-and-pop taquerias get burned often, he said, with grand promises from content producers offering features in books or other media. "And they mess up the whole storyline; they get their names wrong. They don't care. For me, food is representative of the culture, so if you're going to do it, do it right."

From Corpus, Rayo and Neece recount their adventures a couple of weeks before making barbacoa in Brownsville. You can get the good stuff plenty of places here in town, but connoisseurs will tell you nothing is better than cow cheek meat cooked in a proper underground pit in the countryside. "We came back with a few ticks, but it's all good," Rayo laughs.

Cooking alongside a ranch owner who also works as a butcher and taxidermist, the two – along with their eventual viewers – took part in the entire experience, which is steeped in South Texas tradition. They started at the very beginning by digging the hole, chopping the wood, building the fire, and, perhaps most importantly, waiting overnight for the finished product. 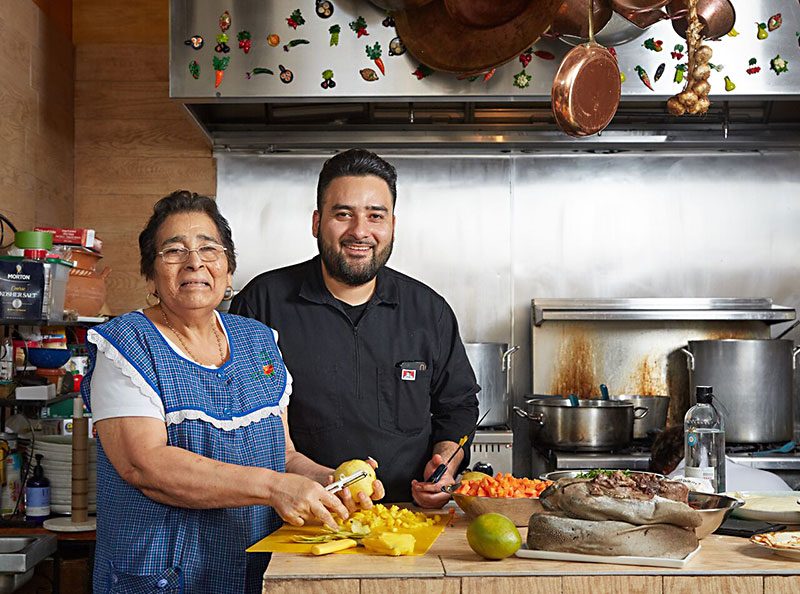 "It was also really cool to be with Mando while he experienced it," Neece says. "I know he's done things like that in his backyard, but this was his first full-on, legit six-foot hole of barbacoa."

You'll run into limestone long before you hit six feet in Austin. "For me, we're documenting these traditions," Rayo says. "Not everybody can dig a hole in their backyard and do what people used to do back in the day. For us, it's about documenting these stories, mostly Latino traditions, and the recipes that get passed down through generations."

Luckily, the crew has had the creative freedom from PBS to go through the trials and errors necessary to accomplish that. The crew shot the initial pilot last summer in El Paso, but the finished product didn't have quite the cohesion the pair or PBS wanted. Instead of focusing on just one facet of the food culture, they hopped from one hot spot to another, in an effort to bring as much of the city to life as possible.

In retrospect, Rayo says they were trying to do too much. Changing up the format, they decided to use each city's specialty food item as a bridge to talking about other issues within the community. And this new approach worked.

"It's like the Trojan horse," Rayo chuckles. "Like, for Austin, it was the migas taco. And then we talked about taco gentrification, and we coupled it up with Tex-Mex versus Mexican traditional. We talk about the Eastside." That same premise applied to the other six cities featured in the show. On the final outing, the two returned to El Paso with a laser focus on carnitas. Getting into the kitchen with their subjects, Rayo and Neece probe regional and community issues in addition to the nitty gritty of the tortilla and meat.

What makes them taco journalists, as opposed to other storytellers, is their commitment to serving as the conduit between the kitchen and the consumer. "For us, it's not about us telling their story, but giving them a platform to tell their own story in their own way," says Rayo.

After spending this spring filming across the state, the Tacos of Texas crew spent the next few months editing. The finished product was due in July. After an Austin launch this fall, it'll be screened in various cities.

A version of this article appeared in print on July 27, 2018 with the headline: Vatos of Texas