What’s the Deal With Styrofoam Cups and Plastic Drinking Straws? 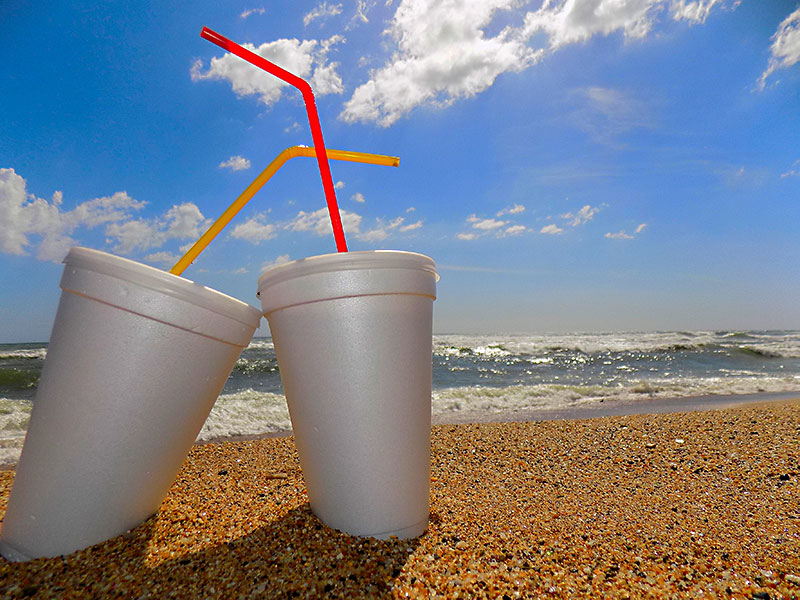 Plastic straws and Styrofoam cups are going on a permanent vacation. (by Thinkstock)

Despite meddling from a decidedly anti-environment state government, Austin still maintains ambitious zero waste goals of diverting most trash from the landfill by 2040. And though state law bars the outright ban of Styrofoam and straws by municipalities, a combination of consumer demand and advocate pressure is helping businesses make better choices in their disposable goods.

Local sandwich stalwart ThunderCloud Subs made news in early June with its decision to eliminate their well-known Styrofoam cups from inventory. ThunderCloud's spokesperson Brenda Thompson said the company was going through a back stock of the old cups, but would change to something more environmentally conscious as soon as those ran out. The positive response online was enormous, and ThunderCloud is just the latest domino in what many hope to be a string of pollution-reducing actions by restaurants.

Other influential industry players are also in the mix. Back in February, Dunkin' Donuts announced that it would nix polystyrene foam cups from its inventory by 2020, and one month earlier, fast food giant McDonald's said it would do the same by the end of the year. That gives Environment Texas hope that change can come even to a state that bans municipalities from banning Styrofoam and straws. The group turned its attention to Whataburger – and its iconic orange-and-white Styrofoam cups – with a letter to the company last month, but has yet to hear back. Still, the group hopes more businesses will follow the lead of Dunkin' Donuts and McDonald's.

"If one of the [largest chains] in the world can do it, I think certainly the local restaurants in town should be able to find a way to make it happen," said Environment Texas' Luke Metzger. "There's certainly consumer demand for it." Metzger noted that Thunder­Cloud reported an influx of positive feedback surrounding the decision, with some specifically buying sandwiches there as a way of thanking the company.

Since the city cannot technically ban Styrofoam or single-use straws outright after last week's Texas Supreme Court decision, Gerard Acuna, who chairs the city's Zero Waste Advisory Commission, said decisions these companies make about how they operate can make a huge dent in our conservation goals. "We are fortunate here in Austin that we do have a heck of a lot of wonderful businesses that answer that call to be good stewards of the environment," Acuna said. "We are lucky."

Environment Texas presented to the commission on the issue of straws this spring, but so far it hasn't gained much traction. Acuna encouraged anyone with opinions on the subject to come to the commission with their ideas or concerns. Environment Texas believes the recent ruling that carved up municipal bag bans would allow for a request-only straw ordinance, in which businesses only offer straws to those who ask. That accounts for people with medical conditions that prevent them from drinking without straws, while still limiting the amount of plastic making its way to the landfill. Some local eateries have already made efforts: J.T. Youngblood's switched to paper straws, L'oca d'oro only serves straws in kids' cups, and El Naranjo does not offer straws at all.

Though the bag ban ruling was clearly a blow, Metzger said Environment Texas is encouraged by a consumer behavior analysis after the extended drought that forced residents into increased water conservation restrictions. The group found that a swath of people maintained their new conservation habits (including watering lawns just once per week), even after the restrictions were lifted. The findings give Environment Texas hope that many Austinites are already too used to reusable options and making efforts to reduce plastic pollution to turn back now.