Virginia B. Wood's Cookbook Collection Will Live on at Cookbook Cafe

"At Home On the Range" at the Central Library 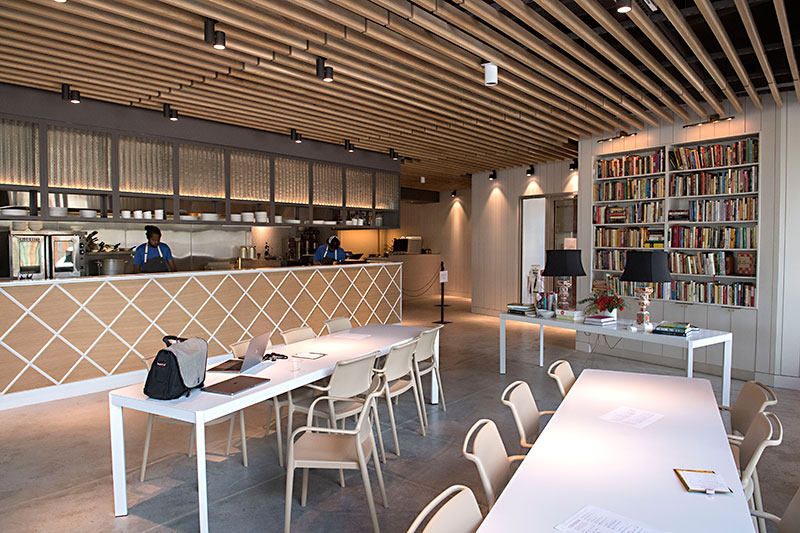 Snuggling up with a book and a treat is a pastime of many, and one particularly enjoyed by former Chronicle Food Editor Virginia B. Wood, who passed away in March of this year. The long-awaited cafe at the city's latest library revamp, Central Library, opens June 21, and the space is also the official home for Wood's enormous collection of cookbooks. Her friends and fellow Chronicle food writers Claudia Alarcón and MM Pack, along with close friend of over 40 years Pamela Nevarez-Fisher, sought to honor Wood's wishes and her tremendous contributions to the local food community by successfully arranging for the public to have access to the books.

Pack said, "Many years ago, Virginia said that she wanted her book collection to go to the library at the Le Cordon Bleu culinary school in Austin so they could be used by culinary students and others. When that school closed, I don't remember her expressing alternate wishes, so after she died, [we] put our heads together to figure out how her collection could be both kept together and available for use. The Cookbook Cafe at the new Austin public library seemed like the best solution, and the folks there quickly agreed to house and maintain the collection."

Wood, a lifelong book lover, amassed an incredible collection. "The collection of around 500 books spans decades, from the 1950s until today, from a wide variety of regional and international cuisines. Clearly, her favorites were on Southern and Louisiana cuisines, African-American and soul food, Texas cooking and authors, and of course, baking and desserts, which comprise about a third of the collection!" explained Alarcón.

Many of the books were review copies she received as Food editor, but just as many were personally selected and curated. To organize the stockpile was quite an undertaking. Alarcón rallied a group of three others who also wrote for Wood – Kate Thornberry, Rachel Feit, and Melanie Haupt – and the group got to work packing, transporting, and storing the books. "Once at Cookbook, [we], alongside a few amazing volunteers, set to unpack and catalog every single book. I classified the books by topic and arranged them on the shelves. This whole process took many hours and a lot of effort and money contributions from Virginia's close friends and colleagues," explained Alarcón.

The women found treasures like Wood's handwritten notes and recipes with gently worn pages from frequent use. Alarcón explained, "Many of the books have either annotations or page markers. I left as many page markers as I could so whoever comes across them can see that [Wood] was interested or had cooked that specific recipe. Among the collection are dozens of Texas-centric books and authors, including one of Virginia's early inspirations, Helen Corbitt. Her Joy of Cooking and Cake Bible certainly saw a lot of action." 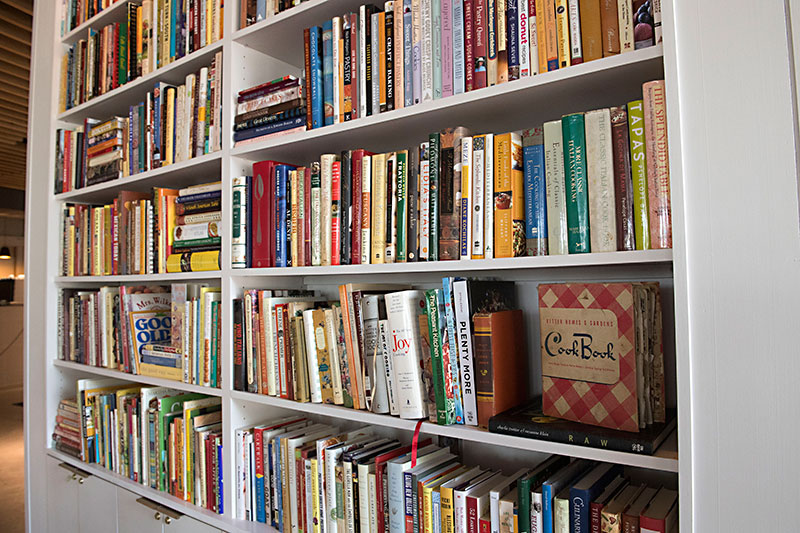 The collection is a testament to both Wood's dedication to learning and her love of food. "Virginia truly loved food books and food writing and she devoured cookbooks like other people read novels. She had wide-ranging intellectual curiosity and a photographic memory; she could instantly put her finger on the whereabouts of a recipe or a topic that she'd read. She also owned many older and out-of-print books by writers she admired, like Helen Corbitt and Mary Faulk Koock," said Pack. "When I'd talk with her about potential story ideas for the Food section, she would sometimes respond with, 'I have a book ....'"

Wood, who wrote the text for Fonda San Miguel: Thirty Years of Food and Art and operated a local wholesale catering business, At Home on the Range, made invaluable contributions – written and otherwise – to the local food scene. Alarcón said, "I firmly believe that without [Wood] the Austin food scene would not be what it is today." And, said Nevarez-Fisher, "Virginia had a mind/memory like a steel trap, and she always referred to her memory as her superpower. She was literally a walking encyclopedia of Austin restaurant history."

Their efforts are really all about continuing to share Wood's legacy with the Austin community. "We hope that anyone who wants to research historic cookbooks, wishes to learn international cuisines, or just wants to add new recipes to their repertoire, can do so in a convivial atmosphere. [Wood] was a mentor to many, and this is a way to continue her desire to teach and share," said Alarcón. "We rely on the community to honor [Wood] by using the books within the Cookbook space, but we ask that they put them back where they found them so others can continue using them for years to come."

Cookbook Cafe is tailor-made for housing the personal library of a bibliophile who transformed Austin's food scene. "I created the menu by pulling recipes from the cookbooks that I felt were true representations of Austin and me as a cook. Some of these books were written by my mentors over the years who truly inspire me, including Jonathan Waxman, Floyd Cardoz, and Justin Smiley. I also focused on cookbooks that represent the South, like [ones by] Sean Brock in Charleston, South Carolina, and Frank Stitt in Birmingham, Alabama," explained Drew Curren, executive chef at ELM Restaurant Group.

He added, "We'll be incorporating farm-to-table ingredients whenever possible, and the menu will change seasonally. Right now, some standout breakfast items include granola parfait, inspired by the Commander's Palace cookbook [Commander's Kitchen] by Ti Adelaide Martin and Jamie Shannon, and the Farmer's Breakfast grilled cheese, drawn from Grilled Cheese Kitchen by Heidi Gibson. Example dishes on the lunch and dinner menu include asparagus with crawfish meunière, inspired by Frank Stitt's Southern Table, [and] chicken pot pie, inspired by Ad Hoc at Home by Thomas Keller."

The architecture was designed by the Lake Flato architecture firm and VeroKolt designed the interior of the space. "Visitors can expect a warm, inviting space, with tons of natural light, a comforting interior, and spacious patio rich with city views," said Val Dahlgren, Cookbook's general manager. "Guests can snack and drink while enjoying the collection, [but] Virginia's books must remain on-site."

Pack said, "The main thing is that these books will be available for anyone who wants to look at them. They reflect one lifetime's interest and curiosity about food and cooking and I hope they'll pique that same interest in others. I love the idea of someone pursuing a subject or a recipe or a cuisine over a cup of coffee in a beautiful setting; I'm pretty sure Virginia would have liked that, too."

UPDATE: Cookbook Cafe opens June 21, and the story has been edited to reflect that.
A version of this article appeared in print on June 22, 2018 with the headline: Home on the Range at the Library 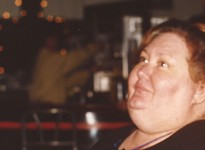 Virginia B. Wood Dies at 67
Austin food community mourns the loss of one of its champions