Why Farm-Raised Fish Are a Good Idea for Austin 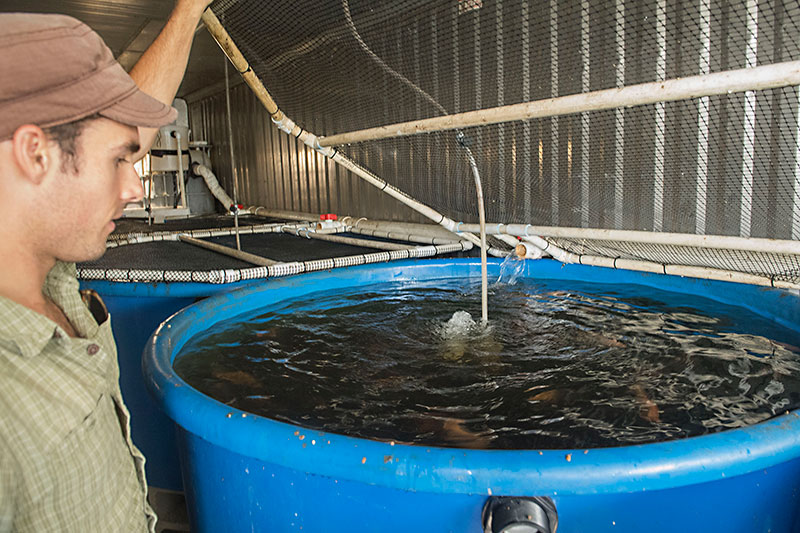 The world's oceans are incredibly vast. Covering 71% of the Earth's surface and plunging to still unmeasured depths, it's hard to imagine that life under the waves could be touched by a bunch of landlubbers in boats. According to the Monterey Bay Aquarium Seafood Watch, roughly one-third of the world's fish population is overfished and over half are fully fished – and have been for several decades. That hasn't stopped people from eating sea creatures, though. If anything, the industry is booming more than ever.

"When we started this business we could tell that the general population didn't consume as much fish as beef or chicken," says Steven Curtis of Austin Seafood Products, a local fish wholesaler in Austin since the Nineties. According to Curtis, the last 25 years has seen that trend flip on its head. "I do think that the general public is becoming more health conscious and therefore they see the value of seafood as a protein and they turn to it more," he explains. Humans can only rely so heavily on wild fisheries before they collapse. It's hard to feast on a memory.

“Transparency, I think. That’s probably going to ease the fear of farm-raised fish because if you think about it, the other proteins are already farm raised.” – Steven Curtis of Austin Seafood Products

So then why, when sustainability is a huge concern, are people so opposed to consuming farmed fish? "I know there's a bad rap about the fish industry and much of it is probably deserved," explains Michael Hanan, co-owner of Agua Dulce Farm where fish are raised to fertilize aquaponically grown greens. "There's just a lot of sketchy stuff that happens." Despite the extensive research and development since the Seventies (the first decade aquaculture really began to take off), farm-raised fish have cultivated a reputation for carrying diseases and encouraging the use of algaecides, among other complaints.

Hanan says farm production cannot be divided into such black-and-white terms. "The thing about fish farming is that I hear people talk about it in an absolute sense like, 'Don't buy farmed fish.' Unfortunately it's more complicated than that because the reality is that the world's oceans and fisheries have been fished to the max since the 1970s." Without the ability to increase production naturally, to continue to feed our population, the only answer is to cultivate the fish ourselves. Even with the industry's tarnished reputation, 2014 was the first year where farm-raised fish outpaced those from natural habitats. "You have to have farm-raised to keep up with demand," Curtis states. In other words, if you want to continue your sashimi lunch habit, you're going to have to eat farm-raised fish sometimes.

Curtis assures that consuming quality farm-raised fish is actually just as easy as going to the supermarket – it all comes down to reading labels and knowing your producers. "Transparency, I think. That's probably going to ease the fear of farm-raised fish because if you think about it, the other proteins are already farm raised."

Hanan also agrees that persuading people to be comfortable with the idea of consuming farm-raised fish is a matter of shedding light on industry practices. "We need to understand with a little more nuance the types of fish farming that can happen. It's like any other kind of farming," he says. It matters how it's done. Fish bred in aquaculture environments can be raised in ponds, pens, cages, or recycled water systems. Hanan says that there are benefits to each method, but the key to keeping fish happy and healthy is to allow them movement. On his farm, for example, 3,000 tilapia call the inside of two shipping containers home. That many fish in only 600 square feet sounds crazy, but Hanan says it's nowhere near as dense as some commercial fisheries stock their pens. Plus, Agua Dulce fish are generally removed from the tank at two pounds, which translates to every 9-12 months. The continuous transition of fish in and out of the tanks, coupled with short 45-minute intervals between complete water tank recirculation, keeps the Agua Dulce fish top-quality.

In fact, when Dai Due Taqueria (helmed by Jesse Griffiths, known for his local and sustainable protein practices) opened at Fareground, they were buying Agua Dulce's tilapia for their fish tacos. Sadly, this relationship was short-lived and the taqueria had to restructure their menu because they were upsetting the farm's delicate balance between fish, manure, and plants. What began as a 20-fish-per-week order quickly expanded as Austinites discovered how tasty locally, farm-raised tilapia could be. Eventually, "They [Dai Due] were wanting 100-plus fish a week," explains Hanan. "We did it as long as we could but then we had to dial it back."

Agua Dulce still harvests around 60 of their Nile tilapia weekly, and since they are unable to consume that quantity themselves, Hanan says they're looking into possibly stocking the live tanks at some of the new Asian markets in town like H Mart and 99 Ranch Market.

Quality is the other element that prevents many fish lovers from switching to a farm-raised fish diet. Even Curtis admits freely that if sustainability were not a factor, he would unquestionably and exclusively eat wild fish. "You can definitely tell the difference in the flesh from a wild fish to a farm-raised fish," he says. "You almost have to be a backstabber when you answer that question." While he describes the flesh of a farm fish as oily, and not as flaky as its free-swimming cousins, he does acknowledge that his palate is highly attuned to the nuances in fish flavor, and that in reality, farmed products are not far behind in taste and quality. Especially when a fish is out of season, it is more economical and sustainable to purchase the farm-raised variety. Curtis also suggests frozen fish as another alternative. "Now the general public has the mental conception that if it's frozen, that takes away from the integrity of the fish and it's no longer any good, when really and truly, a lot of the time with technology now, all it's doing is preserving the freshness."

Both Hanan and Curtis agree that regardless of the engineering and research that goes into reviving natural wild fisheries and supplementing the supply with farmed fish, ultimately it is up to the consumer to advocate for the fish and ensure they're sustainably and deliciously raised. Curtis puts it succinctly, saying, "Sustainability shouldn't even be talked about; that should be a known thing that everyone agrees on. The question is, 'What is too much and what is not enough?'"

A version of this article appeared in print on June 1, 2018 with the headline: One Fish, Two Fish, Wild Fish, Farmed Fish